So I constructed a plastic kit that Jason very kindly donated. The Esci Churchill Mk IV [Correction - the kit is Infantry Tank Mk IV, Churchill III]. It has been about 35 years since I built a model, and I also have the very inaccurate Airfix Panzer, and the Esci Sherman M1A1. As I am going to build US and German 1944 forces, I thought I would build this one as a practice run. 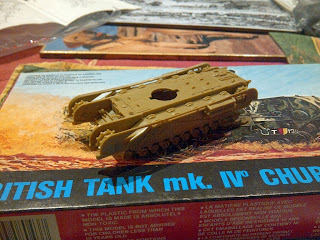 So the good...  the kit went together reasonably well, although the front and rear sprockets don't quite line up with the kit mouldings. It's a nice kit, plenty of good detail, and I reckon will paint up well. Getting a crewman was a bonus. 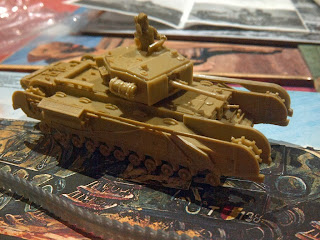 
The only polystyrene glue I have is thick, splodgy and strings everywhere. I spent for ever picking strings off with a pair of tweezers. Plus the turret moulding doesn't quite line up. (The kit has been in a garage for years, and perhaps warped slightly in the Australian heat?) Nothing that can't be fixed with some green stuff, once everything is solid.

The ugly..  anyone know how to get the tracks to go on? Horrible rubbery things, they seems too short. The final part is to put the track guards on, which I can't do until I can figure out how to get the tracks reasonably tight without breaking the bogies and sprockets. Oh well, some time to be spent on the various internet modelling sites. 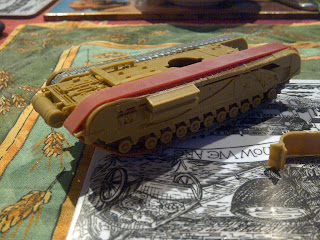