Regular readers of this blog (are there any?) will doubtless recognise some of the following. I embarked on a spree some time back of putting together deployment points and civilians, as they are not only an important part of 'Sharp Practice 2' my current ruleset of choice for the American War of Independence, but also provide nice table dressing. 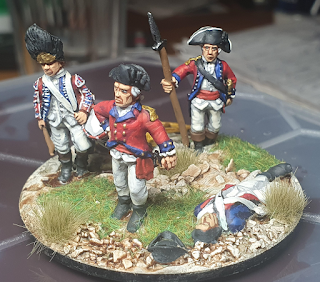 Unfortunately; as is my butterfly way, I got distracted by 'Oh Shiny' things... again regular readers will doubtless remember many of the 'Oh Shiny' things that intervened, (many of which;, sadly, have subsequently themselves been put into a box, to be finished off 'at some point in the future'.) Part of this was also that I wasn't very happy with how they were turning out. Off to the shed and in a box they went. 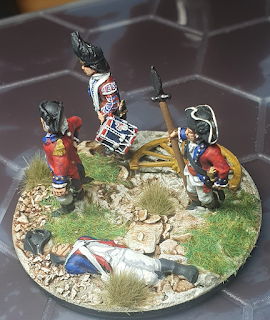 Cor, look at the lace on that bloke..

So as is also the way of wargamers, eventually, the dread procrastination led me to reorganise, for the umpteenth time, the storage and packing of my figures. And I rediscovered this lot. Needing only a few licks of the brush to complete, needless to say they have been sitting, awaiting that for the last two months or so. I convinced myself they didn't need a significant repaint, and finally they got the last little bit I needed to do, drums, lace, buttons, etc.  So here they are. 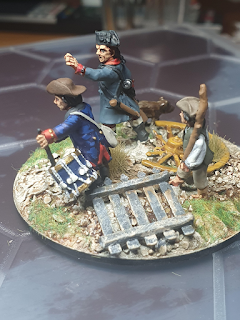 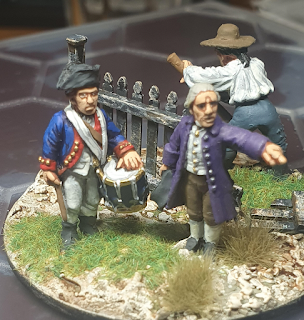 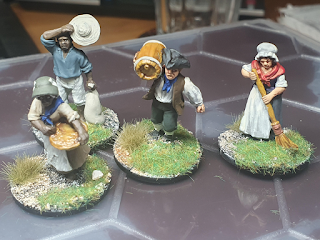 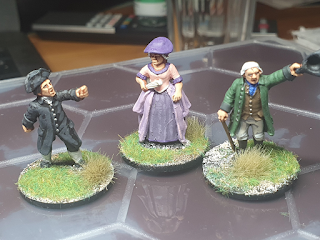 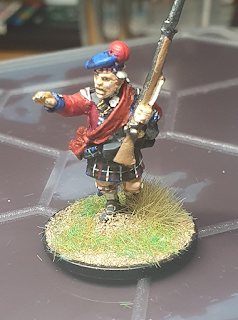 Highland Sergeant
Another box that can be packed up together with the AWI wagons. Little steps.

Fancy a snifter.. ? CoC Drinks anyone?

One of the support options for the British forces in the Too Fat Lardies 'Blitzkrieg' supplement to their Chain of Command rules is the 'Drinks Cabinet'. Apparently it wasn't unknown for British officers to unofficially issue a few medicinal 'stiffeners' to improve moral.

Sabotag3d make a very nice printed drinks cabinet, and I just happened to have a slightly Blimpish looking officer figure lurking in the shed. You don't actually need a marker to play this support option but it was too cool not to. In play I think I might use it to replace a Jump Off Point when the support option is taken. I really need to look into techniques for painting glass, but here's the rough cut version. 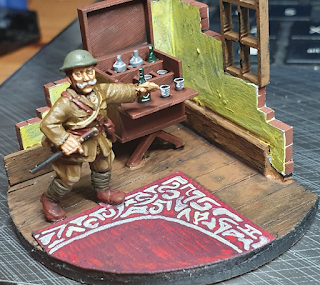 I really shouldn't photograph things, I keep spotting mistakes... the keen eyed might also notice the legs of the cabinet have been cut down a bit. I found the original to be a little too tall for my taste. With hindsight, printing out a phototgraph of a rug might have been a better option, but IMHO, it still looks good when viewed even 30cm away. And I really need to fix up his boots. But it is one more thing off the painting table! Huzzah!

So not quite six days later. I keep spotting things in the pictures that I didn't see before, but I have decided it's done. No more faffing about. The roof tiles are by Warbases, but I really struggled this time - They just didn't want to lie flat.

I also didn't manage to get all the colours to come out well in the pictures.. but I swear they are there ! 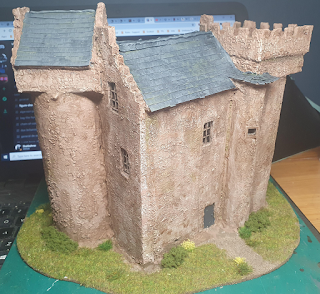 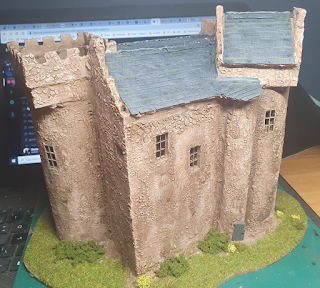 A small postern gate.. just in case you need to leave by the back when neighbours come knocking at the front...

So Stiu and I are going to do some 1745 gaming. Sounds like fun, and a lot of plaid..  So on Tuesday I casually asked some folk what 28mm Scottish buildings for the period were out there. Not a lot apparently. Anyscale Models do some nice Scottish 'black houses' but in 1/76. So I thought I might as well build something. And this beauty is about 5 minutes from home. So I have some foam core, I have an Australia Post picture tube, the centre from a roll of tinfoil, and some windows from Warbases. How hard can it be? The crenellated section on the left-hand tower is a spare piece from my Hoka Hey church, pressed into service as this is going to be 'inspired by' rather than a straight copy, and I thought the fighting platform would add interest. All cut by eye and assembled with a glue gun. 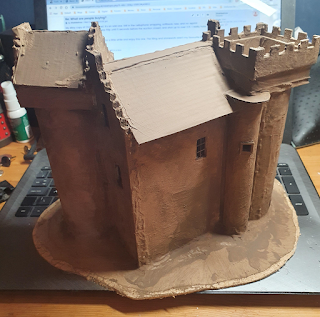 And a first coat of thinned Wickes Ready Mix filler, MDF base and a cardboard roof section. 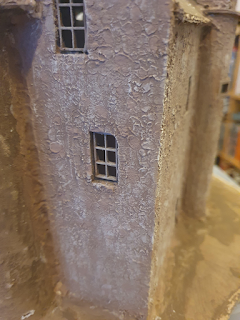 File down the worst of the first coat, another thin layer of ready mix filler, then rolled with the Greenstuff World small cobblestones roller, and added detail scraped in with a small screwdriver. 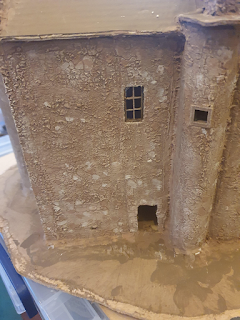 Doors etc to be added... 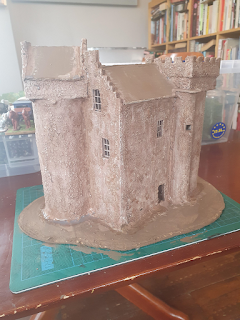 Now waiting for roof tiles, a door, some detailing, and ground work. I am very happy with how this is going so far.

There seems to be a huge amount going on at the moment.  Work is hectic, loads of change and changing demands, reminding me of the Billy Connolly clip about 'demands'. (Don't listen if you are offended by bad language... )

This week has been poignant too. My dad died nearly two years ago, and ever since, I have visited his shed when I needed a tool, or a set of sanding disks, or, well, pretty much anything, from a lathe or a bandsaw, to tool makers dies and spoke-shaves...

There's been something comfortable about going there, his old, paint-stained dustcoat still hanging from the door. I'm much closer to him there, than at a lump of stone in a field overlooking the estuary. That stone may have his name etched in, but it's etched much deeper into the vice that has been on his workbench for 50 years, or the lovingly oiled Stanley planes and carefully arranged drill bits. In what would have been chaos for anyone else, he would turn up what you needed in an instant, with a conjurers grin and more than likely, a pithy piece of Scots.

But now the house has finally been sold. So the workshop must be cleared. And this week I stood in the midst of the sawdust and clamps, the chisels and bits of wood that 'might come in handy', and looked at what I might take away. I could have taken it all, but how often will I use a lathe, or the bandsaw? They would simply grow dust in my shed and I couldn't bear the censure of his shade as the lovingly tended blades turned to rust and handles to rot.

So I took one or two small things, a hammer a punch, a tape measure, And the rest will go to the 'Men's Shed' and I hope will be used, and oiled and tended, and bring as much joy as my dad got from a clean wood surface or a well made tenon joint. It's what he would have wanted.

Pardon me for the introspective. I suppose I have reached a point where I am at a bit of a hobby crossroads.

My usual playing group have gone silent. We haven't met as a club since February. I have been playing at the Virtual Lard days, which have been fun but also served to remind me of what I am missing. I've made a new table top, so I could host games, but no-one to host them for in lockdown. I also seem to be getting too tired to do hobby stuff during the week, and too busy to do hobby stuff on the weekend.

I've been gradually painting figures, but it's hard to sustain the motivation to paint when you wonder if you will ever play with the figures. One of the most recent sets of figures were the Orcs for 'goblin week' for for the 'Loose Association of Wargamers' forum.

They're doing Dwarfcember, so I thought i would pick up the Oathmark dwarves from my local game store. Sold out. eBay to the rescue, and a set of Alternative Armies Flintloque Dwarf Landwehr arrived on Saturday, another set of figures I will paint, then be put into a box, and passed on to the wargamer's equivalent of the Men's Shed in 20 or so years time.

Incidentally, if there ever were an wargamers equivalent of the Men's Shed, then I suspect the organisers would be nobbled by figure manufacturers in minutes... there has to be more unused lead out there in sheds, boxes, basements and attics than in every manufacturers stockroom and blister pack combined.

It all leaves me wondering what to paint next. Logically, having finished the Romans, then I should do an opponent so I can run solo games of Infamy, but I have never been enthused by solo gaming.  There are a whole bunch of 'almost finished' AWI deployment points, carts, Roman mule drawn carts, etc. Carts, wagons, dwarves, lictors, there's even a Kenneth in there. All in dire need of paint and stuff.

And I finally finished a force for Infamy. Republican Roman. Mainly Victrix plastics with the Warlord Scorpion and arms for the crew. Shields by LBMS.
Given the nominal scale of Infamy, they should all really be from the same legion, but one of the options includes 'raw" legions, so I wanted one to be all pristine, newly equipped and shiny, the veterans more utilitarian. The veterans are on the right. 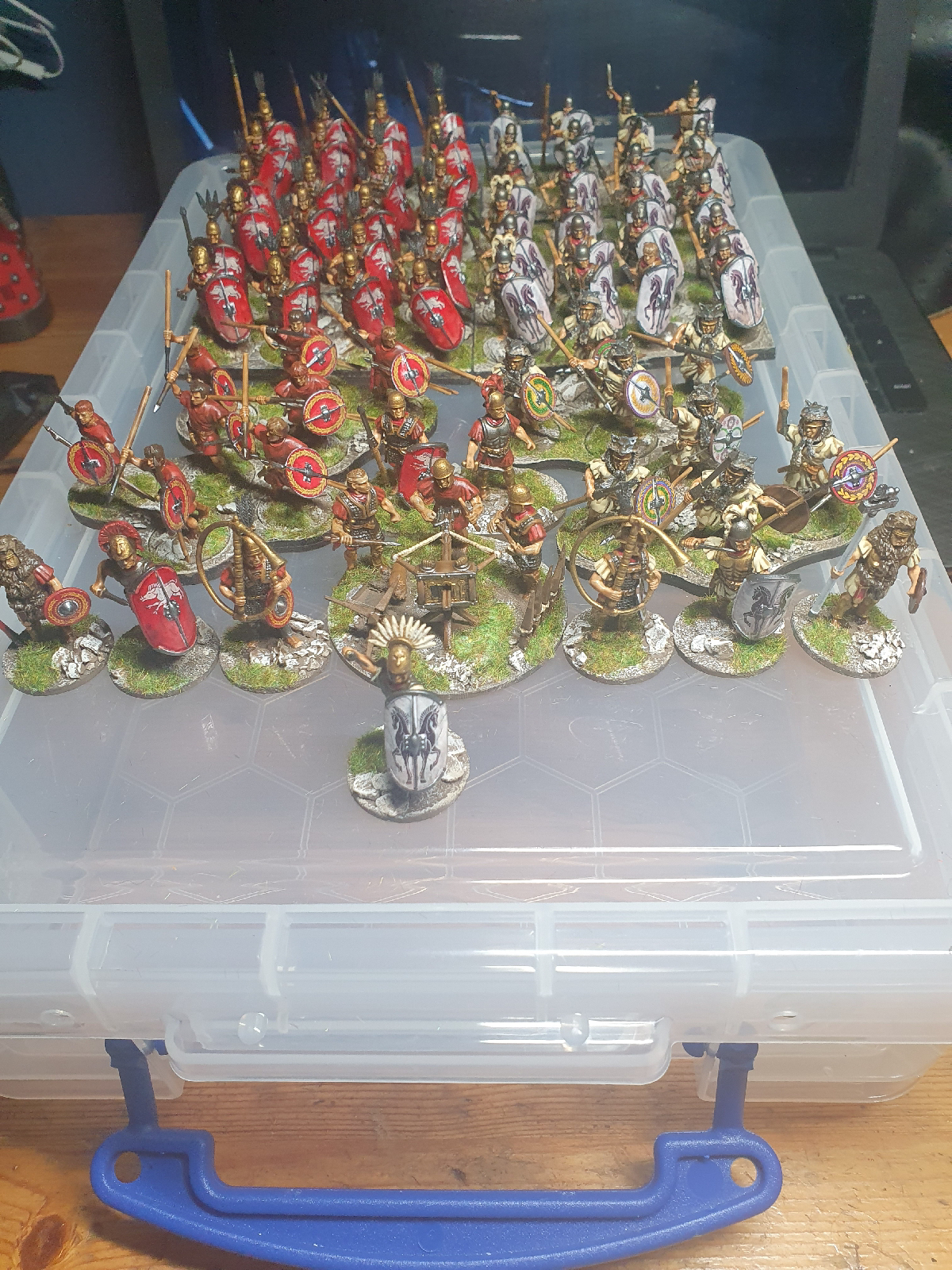