Off to Singapore - well, not really

Despite the intrusion of real life, such as job, family, medical issues (sigh!) I have been making fairly steady progress on the next major project, forces to fight the Malaya Campaign using Chain of Command.

I am choosing to build a generic Japanese infantry platoon, and a platoon from 2nd Battalion, Argyll & Sutherland Highlanders; of course, some support options plus, more intimidatingly, the terrain - jungle, roads, paddies, buildings, etc.. The two Chain of Command lists for the campaign are linked from the Too Fat Lardies blog. My only modifications will be to not rate the ASH as 'Elite' as this should be highly restricted, and while they were certainly a better jungle trained and hard-fighting unit, it would be difficult to justify Elite status.

For supplementary information and ideas for replicating the fighting in Malaya, I would highly recommend the Pint-Sized Campaign in the Lardies 2015 Christmas Special. It is focused on the Australian effort, but the background and content apply to all the forces fighting in Malaya.

I confess, I do feel somewhat guilty about the 28mm Italians from Empress, languishing in the shed, but each time I haul them out, I think about whole new sets of terrain, plus the vehicles and so on. I can comfort myself that I have finished an AB41 armoured car: 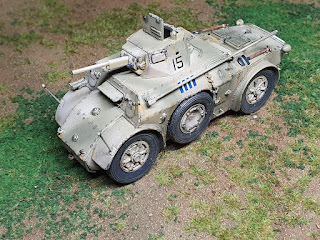 And I still haven't got my 3d printed M13/40 from a bloke at work..  etc. Ok, I confess, I'm a little intimidated by the quality of the sculpts and I want to really make them look good.

One recommendation from 'Setting the Scene 2' - a terrific modelling guide, and one of his guest painter Nick's, aka (Moiterei)  tips, was to use the Andreas colours Field Grey set as one of the base colours for Italian uniform, and so I tell myself I have deferred painting the figures till I can justify €18.5 for the colour set.

Enough excuses. Progress on the Malaya Campaign kit. So I have now assembled and undercoated some Warlord bargain vehicles, (Lanchester, Universal Carrier and Type 97 Chi-Ha), and I have a Vickers VI Light Tank (Blitzkrieg) that will do double duty as an India Pattern Light Tank, yet to be assembled. I still want to get a Type 95 Ha-Go, as these seem to have been a staple of the Japanese campaign, but in reality, I suspect I would need to get a couple of them. I am still looking for a good cheap source for these.

All my aquarium plants have arrived but I need to get a clear day with a few hours to do the MDF bases cutting, chamfering and cleaning up required...  so in the meantime I have been focusing n the infantry..

These are the Perry figures, with Woodbine head swaps on a select few. Standard British platoon organisation of three squads each led by a corporal, with a Bren team and a rifle team, platoon HQ is 2nd Lieutenant, plus platoon sergeant, Boys AT rifle team and 2" mortar team.
Just add Goop!.  ok, so first layer of goop, sprinkled with grit (kitty litter), undercoated with car spray primer, and a second layer of goop on the bases.

And now it's on to assembling (literally!) dozens of plastic Warlord Games Japanese that I picked up in their sales. I ended up with a box and 5 sale sprues, giving me a total of 60 figures. A Japanese Platoon is 3 thirteen man squads, a knee mortar squad, plus platoon HQ, so a total of 54 men. I also picked up some TAG Japanese supports (MMG on tripod, flamethrower and sniper teams) during their recent sale.

These guys should be assembled today. I have glued them (using Tamiya Extra Thin Cement) to Perry bases from their Africa Corps and Desert Rats sets, as this gives a pretty sturdy bond, and then the Perry bases will go on to my standard 2p coins for weight.

I am still thinking about how best to do 'jungle' basing on figures, I suspect involving herbs, so if anyone has any bright ideas, pass them on in the comments section!

Action in the Ukraine

So I finally managed to get out the Eastern Front toys for a game of Chain of Command at the club today.

Pretty simple scenario, with the huge encirclements of the opening stages of Operation Barbarossa, a Soviet platoon is trying to evict the German defenders who have captured a critical rail junction.

A good fun game, and looks like at least a few Soviets made it out of the pocket. In my lists the KV is a list six choice, which seems absurdly cheap for something virtually indestructible in period. I think I am going to have to staff up some BT fast tanks, and T26 light tanks, as there is nothing in the German 1941 lists that can touch the KV.

Steve's Force Morale hit 0 though surprisingly for us, leader casualties were quite light. I'm looking forward to another Eastern Front game, but I will need to work on more scenery.
Posted by Doug at 23:11 3 comments:

one of the traps of the Chain of Command rules is that you look at the available support options in a list, and think 'yeah, that would be a very cool vehicle' although there's actually pretty good odds for most, they will be used once, if at all.

But I'm a sucker for cool vehicles, especially when they are free, cheap secondhand, or available heavily discounted. So here's the latest batch to roll out of the painting shed. 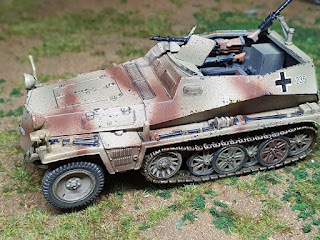 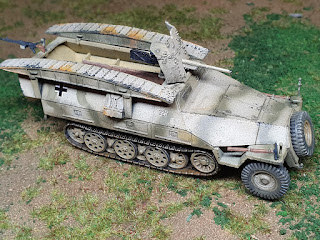 I'm thinking I might drape some foliage over the PzIV. I just could not get this one to 'feel' right. The model itself isn't great, and I just couldn't get the paint to work for me. It's still a Late War Pz IV, but the quality of this and the Rubicon Panzer IV D/E I have to paint is light years apart.
Posted by Doug at 20:57 No comments:

So despite the fact it's going to require a whole new set of 28mm Terrain, and that I already have about 6 or more platoons waiting for paint, I couldn't resist something different.

I had already, almost by accident, picked up a few bits and pieces, such as a Type 97 Tank, some Woodbine Company heads from Gripping Beast, a Sarissa hut..  Then with the Black Friday sales, and Warlord offering discounts, it would almost have been rude not to..  So - a Lanchester, etc..


This shows the Lanchester before detailing. It's not a bad model. (I am wondering what junk to put in the back). Plus the HQ for the platoon, 2nd Lieutenant plus Sergeant, Boys AT Rifle and the 2" Mortar.

Unfortunately, the picture quality isn't great. These are Perry 'Desert Rats', with Woodbine heads. I wasn't sure how well the heads would fit, and in some of the pictures, such as the foreshortened one below, they do look slightly large. Looking at the side shots though, it's certainly well within the range you will see on wargames figures, even if slightly larger than the Perry originals. 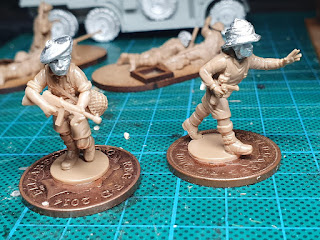 I still have to add green-stuff sock flashes, as these seem to have continued to be worn, but overall I am pretty pleased with the conversions, and I am looking forward to getting some paint on these. (I confess, I am tempted to give the officer a cricket jumper..)

And of course, these are for a platoon from 2nd Battalion Argyll and Sutherland Highlanders, Malaya 1942, for the Fall of Singapore. Beware masses of incoming plastic aquarium plants to build jungle...