So when I started rummaging around in the man-cave, I discovered not only Chariot minis Classical Indian, but also two Essex elephants they sell as Ghaznavid.

I started slapping paint on, and I am reasonably pleased by progress so far. 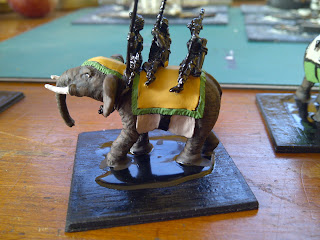 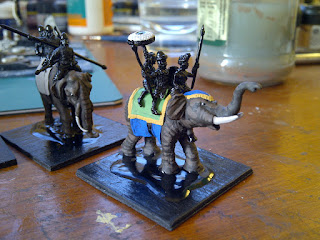 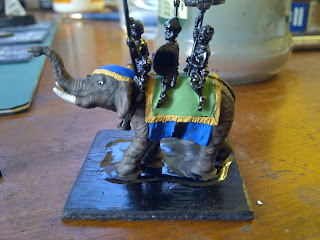 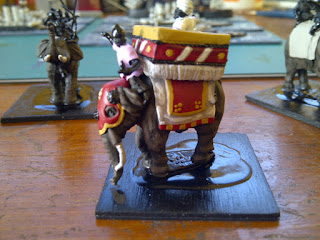 Obviously a lot of work still to do...

So today I chopped down a few trees, I started with the chainsaw, but ending up using a pull-saw as the chainsaw was struggling with Acacias. Those things are real tough!

Afterwards I went to hide in the man-cave, and decided I had better start by tidying up a few things. I slapped some paint on seven elephants, a mix of Chariot 'Classical Indian' and Essex 'Ghaznavid' - which might end up being part of a Desert Rajput army. (In DBMM, 'Hindu Indian')

I discovered about 57 Museum Minis camels with lancers (AC71) in the lead pile the other day, and thought that Desert Rajputs would let me use a decent amount of them, (up to 12 elements in the DBMM list). The Museum camels are lovely, but much too big for the standard basing (30mm deep for 15mm figures

There were also a number of Mirliton 15mm Condotta, principally infantry, Hungarian horsemen, Stradiot, and mounted crossbowmen, that I undercoated and put flesh colours on over 10 years ago, that have never been finished. I originally purchased all the figures I would need to do a Venetian colonial army in Greece. Some of these then got 'semi-finished' to be a DBA army.

Now - I discovered a kilo of 'Eastern Medieval' lead recently in the great evacuation to the man cave, and these guys would fit right in. So the Mirliton got pulled off their painting sticks and stuck onto DBMM sized bases.

And finally, my Houston's ships - the acrylic gel had finally dried, so I applied a white drybrush to the gel wave-tops...

Not a bad day's work, although I should probably try and focus on one thing at a time.
Posted by Doug at 11:07 No comments: