Ok, set myself the challenge of doing 6 elements today.. and ta da!   Basing obviously to come, but that is now the last Scottish elements for the Franco-Scots, plus two elements of 'Gros Varlets'.

Just watching the DBMM Yahoo Group, and I see there is some discussion about Hungarian heraldry. I thought I would point people at the ones I did for the Hungarian Ally in my Wallachian army, and realised I hadn't posted any pics of these finished figures. Picture quality not the best, and I see that two lances need a touch up after a tool-box accident turned them into spaghetti. 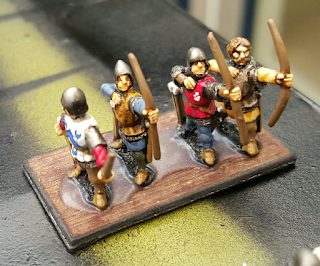 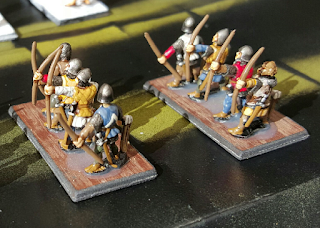 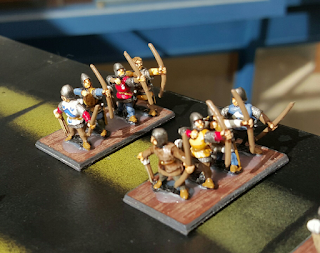 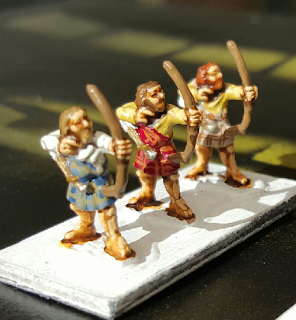 Those of you familiar with the Fanaticus Forum (DBA) will probably be familiar with the phrase. I finally added some Psiloi to the Franco-Scots. The DBA list just says 'Psiloi' - and the figures I used for Landwaster last week were just generic peasants.

The DBMM2 list makes some French crossbowmen compulsory, but in keeping with the idea that this is basically a Scots army with a few French along, and that formed crossbowmen didn't seem to have had much of an impact in the battles I am interested in, I decided to do these as skirmishers (Psiloi in DBx terminology).

All Corvus Belli figures, and I still have a load of these unpainted if I elect to change the army composition. Plus I have added another seven Knight elements, three of which will be generals.

I managed to source one more pack of Corvus Belli 100 Years War Knights, so together with my command packs, I have enough for another seven elements, three of which will be command stands, two for Scots allies, and one for a French ally.

So I elected to paint up the horse barding first, as this will then let me easily match up the riders, rather than having to continually refer to my chart of shields and names.

The army will eventually represent the Scots forces in France circa 1424 but I have also mixed in some of the companions of Joan of Arc and Scots forces present at Orleans c 1429.

Now, it seems to me that I do a lot of WIP posts, but I rarely show the finished product. (This could be a result of the average wargamers 'ohhh shiny' attention span..) I did show some pictures of the S-Model BMD and the Modelcollect T64 under construction, but here they are 'finished'. I still have a Mi 24 Hind E to build, and the Spetsnatz to paint..   but at least there is some progress: 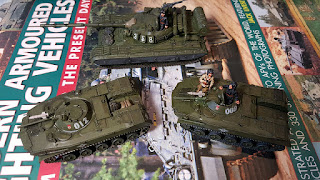 So here are the pride of the Soviet forces, model 1975 T64, and two BMD. I looked in vain for easily available Soviet tank crew, and drew a blank. So these guys are the AB WWII vintage. The padded helmets are very similar, and a black coverall is a black coverall...

Scots in the 100YW Final

As a couple of people have made some nice comments, and asked to see the finished product - here they are. Only a couple of minor disasters, including discovering that virtually all my bases had been afflicted with the magnetic sheet starting to peel away from the wood - (apparently a bad batch, which the vendor is replacing..   marks for customer service Olympian Games). Superglue to the rescue..   then of course, I managed to flick the command stand off the table with a casually out-flung forearm... more superglue, and re-basing..  Then there was the peculiar smell when I opened up my home-made basing wash, which seems to have fermented or had some other peculiar chemical reaction - hopefully the stench will dissipate before they actually get on the table.

After all that; Melbourne Cup day was not that productive from a betting point of view... (my one day of the year to have a flutter... involving calling the betting agency to re-activate my account, as it gets used only on Melbourne Cup day) - but I took the chance to finish basing, and paint up some banners. 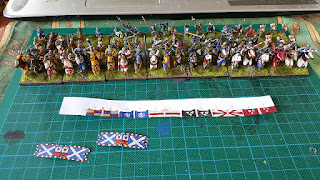 In this case, I elected not to follow my usual practice, which is to do a colour print of a banner and then overpaint. This time I just painted from scratch. Pretty happy with the results, although I have seen no evidence for banners in use by the Scots at this period, so I was forced to get imaginative. I suspect it should be longer, as per the 1388 Otterburn Standard, but this will do.

I wanted something that looked like fertile French meadows - so basing was white-glue and fine sand, wash dark brown, then a whiteglue dab and sprinkle with Baccus 6mm summer turf, with a final touch of Leadbear's tufts and heather bushes.

And the final glamour shots are below: 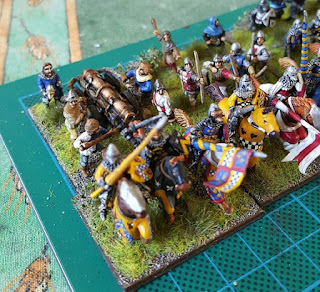 Still not hugely happy with the bombard, but twill do...  Buchanan, Swinton and Stewart of Darnley in front. 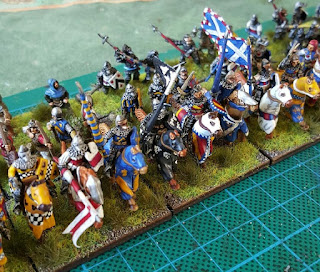 Melville, Houston, Chambers La Hire, La Fayette, Dunois, and Carmichael as the Standard Bearer, the dismounted version is behind them. 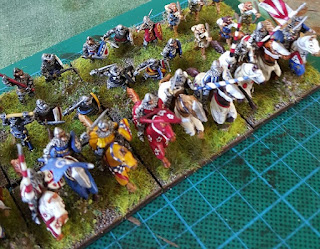 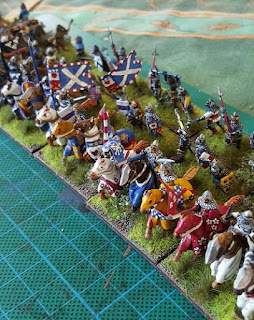