For some reason, these just seemed to take forever. I don't know, it was possibly that I had a first rush of enthusiasm when I finished my Early War French, and then the saga with BTD just left me fed up.

But they are finally finished and I am reasonably happy. Let me know what you think?

In Chain of Command, most crewed support weapons have a crew of 4 or 5, sometimes with a junior leader.

So this gun only has one crew on his base, there are other figures I have listed as 'handlers', mostly made up from the Warlord plastics, that can be added to make up full crews. The square thing on the base is a dice frame from Warbases that will hold a 7mm dice to show casualties.
These guys are normally in platoon headquarters with the platoon commander and platoon sergeant.

This is a Warlord Games pack, picked up on a whim before I checked and discovered that the AT rifle isn't generally available to German units in 1940. OK, should see some use when I game Barbarossa, that'll really scare those KV tanks!

I think the guy in the greatcoat is going to be retired, he looks way too senior for the scale of a CoC game, but I love the Warlord Games running 'officer' with the MP38. (Technically, the officer should be pistol equipped, but hey..  artistic licence and I will just count him as a pistol.)

The lads in the officers hats can stand in as Junior Leaders for the support weapons as required, the more disheveled chap on the left is the platoon sergeant, and the ones in front are the extra crew figures to make up full weapons crews.

I sized this base so it can sit behind the AT guns, the Le IG and even the static MG 34 to make the crew numbers up. I figure that box could hold almost any kind of ammo.

Another box, and I do like that kneeling figure. Adding the base above on the back of this one gives me the full crew while maintaining flexibility.


As above - you can see some of the great variety you can get with BTD.

As above, so below!

The Early War German platoons were organised into 4 squads, not the later three squad version. It also gives me the choice of another squad as a support option when playing post 1940 games.

Finally - the MG34 in its static role as a medium machine gun. To make up the crew I will need to use some of the handlers.

So far the painted German vehicles include a PzIV, a PzII a PzJager I, a Kubelwagen and an Sdkfz 222 armoured car. So the platoon is pretty well provided for in support options.

Now to decide whether to tackle GIs or Soviets next...
Posted by Doug at 21:22 4 comments:

28mm Buildings and US Armour

So, I haven't managed to get much wargames stuff done, real life has been so very intrusive. I have managed to slap some more colours on the Early War German platoon and supports, but they are still a long way from being picture-ready. Some progress has been made on the buildings.

I am fairly happy with the building design, and unlike my first thoughts, I have tiled the roofs, but I now need to add weathering, signage, and a range of little details like a light etc. I haven't quite worked out what kind of workshop it might be, but I wonder if it could be a bicycle workshop?

Ok, I have to confess; I am a little disappointed with how this is turning out. Essentially I got this wrong. There's a trap for young players, in that the Cafe Normandie signage should go on the first floor (second for our USA chums), and each of the flooring pieces has uniquely keyed tabs for the walls. So check that your signage piece, and the unique rear section for the first floor (2nd for our US cousins etc...) fit on the same floor section. Dry fit, dry fit, dry fit..

I ended up with the Signage on the second floor, as I assembled it quickly without checking, and it seems like I blew the whole thing. I simply couldn't get a neat join at the corner intersections, and even after a grouting coat, the interlocking sections are still painfully obvious.

Having seen the sample assembled model on the website, and a sample 'in the flesh' at Claymore, I can't believe the issue was the model, but much more likely that I just boobed in the construction phase. I wish I had another one of these to try and get it right, but ah well. In hindsight, as well as that, I wish I had elected to have the windows either fully closed with shutters, or entirely open. The half closed ones just look odd.

Anyway - on to something I am happier with - the Rubicon Stuart/Scott model.


I have left the top hull section unglued so I can swap them out. In an ideal world, I would have cut away the top of the glacis plate and attached it to the different hull tops as the glacis is different, with the Scott having hatches there, the Stuart on the top hull plate. Again in hindsight, this would have been relatively easy, and I could have used magnets to hold the alternative turret + hull-top + glacis in place. At the time though I was again. rushing it.

As with all the Rubicon models I have made, this was an absolute delight to put together, with no flash and really well engineered. About the only thing I did to improve the model was drill out the lifting eyes. The decal sheet looks excellent, but the one criticism I have of the kit is that the marking options are not included anywhere, and so you are left to do your own research - which isn't ideal when you are looking at specific registrations.

I'm still hunting for specific combinations, if anyone can help out, let me know in the comments below.
Posted by Doug at 23:23 No comments:

One of the pieces of loot from Claymore was the Charlie Foxtrot model of the Cafe de Normandie, originally in Carentan. I've seen various versions of it.

My version is still awaiting clean up, roof tiling, drainpipes etc, plus signage, but I may make it something else, a hatshop perhaps.. 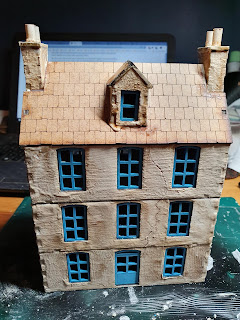 Fairly happy so far.
Posted by Doug at 01:06 No comments: 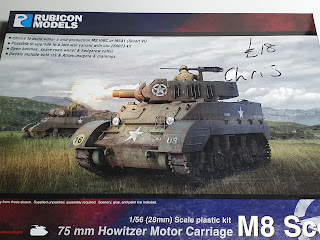