A Mysterious box.. what can it be? 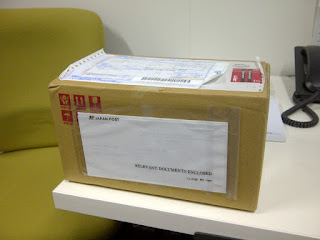 All the way from Japan... 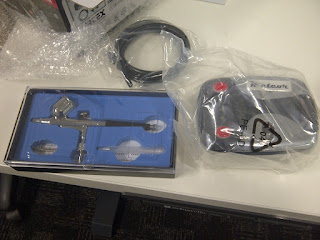 So rather than keep reworking these, I have decided they are done... 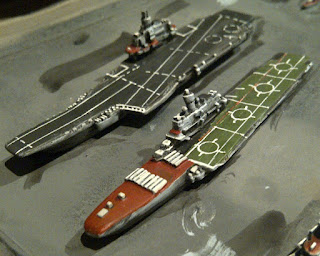 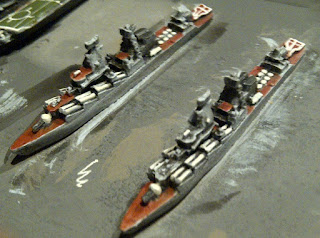 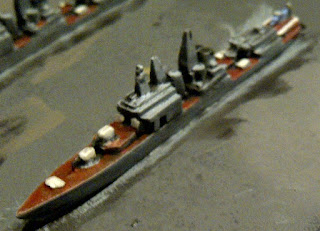 They are starting to look the business. Once this is all nice and set, I will go back with an off-white and start doing some highlights. From various photographs, it looks like gun turrets, missiles tubes or tube caps were a slightly lighter colour. There are also ships' boats - helicopters and so on.

I just need to get some bases cut. Still think I will go with magnetised veneer from Olympian Games.

The air wing. I have ordered some 1/2400 choppers from QRF, so will add these when they arrive. 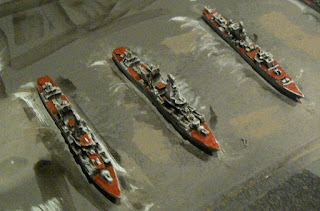 The cruisers, again, I really like these models, and a few highlights, helicopter deck markings, hull numbers etc should make these pop on their bases. 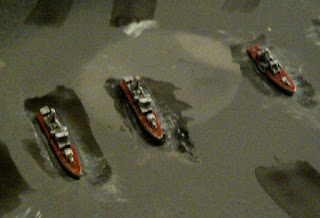 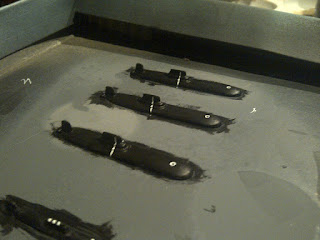 I know the boomers shouldn't have the white stripe, but the black was so dense and unrelieved. I am going to go back and add some missile panel patches in a very dark grey to try and create something a bit more interesting.

Quick paint on the decks of the carrier, plus  GW 'space-wolves grey' drybrush on the rest of the Red Banner..

Here's how they look day two..  red decks to go, interestingly I noticed on the older ships, the deck is a greyish red/brown, and the helidecks etc are quite a red brown.

So the grey undercoat, black wash and first drybrush are on. The light isn't good, but I think they are still too dark.. 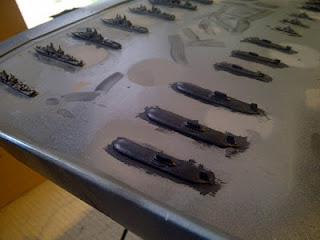 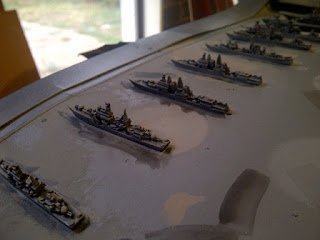 Udaloy I with Sovremenny in the background.. then Kara, and Sava Class Missile Cruisers.
Posted by Doug at 23:12 4 comments: 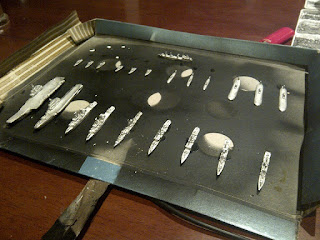 "Krasniy Oktyabr" ? Well, when you have three Typhoon Class subs, of course one of them has to be "Red October", Comrade Captain...
Posted by Doug at 12:04 1 comment:

I have been so good this year. Unlike some other people I don't post totals - but I have literally not bought a figure, my only wargames purchases a couple of bottles of paint, some bases from Dean at Olympian Games, and some rules.

I even had a good hard look at my lead stocks, converted some into the basis of the Desert Rajputs, made some decisions about what I was likely to paint, unlikely to paint, which armies I had in raw lead that were too similar to existing armies...  which periods I could cover. Then took the rest down the club and it was like one of those 'Shouty' ads...   you know.. 'CRAZZZY CRAZZZY PRICES!!!!!'

Well - ok, so trying to persuade hard-core wargamers that they need more lead is like flogging bottles of Scotch at an AA meeting... they know they shouldn't but...

So, several kilos of lead lighter (thanks Tim, Jon, Michael etc... ) I had a few hundred bucks in my pocket, and by coincidence, there was this bloke on TMP selling a Medieval Army for a mere $200...

I excused myself with the thought that it was merely a like for like swap...   so X kilos of unpainted lead for a bunch of (quite nicely) painted stuff...  all good..

Ok, so how much could it hurt, if I just ordered the rules.. not expensive..  here in a few days (I hope..) then I can decide whether I want some ships. So no prizes for guessing where this is going...   Right, straight to the Navwar site to order some ships...   Now did I mention Thomo's earlier post..? where he discusses just how hard navwar make it to do business with them in this day of internet ordering and online payments and stuff?

One international fax later, and of course, it isn't cost effective to do a small order, so three navies coming my way in 1/3000 from Navwar..   Japan, UK and USSR. Japan could be involved almost anywhere in the Pacific (Kuriles anyone?) - Russia world-wide, and the UK because of relatives who served in the RN...

So firstly, apologies for the DBx speak...  but that was a really fun game last night with the Desert Rajputs against Jon's Later Muslim Indian (LMI). I got to use my new ‘Arid’ mat that cost me a small Euro fortune (hand made by Italian craftsman you see.. ) and the Rajputs, while still only partially painted, are starting to look like the business. The LMI were very pretty too, especially like the ‘Grumpy’ Indian Swordsmen  - (DBx Blade(F)) – very colourful.

I used all the gimmicks..   4 elephants in ambush in a wood, My own Swordsmen Blade(F) on river boats, and a flank march. Was a great game, very tense. Came down to my flank march looking like they were in serious trouble after Jon’s Elite Cavalry (DBx Cv(S)) saw off my Camelry (apparently Knights & Cavalry should flee from Camels if beaten... but we forgot that in the heat of battle.... )
I had to make a few desperate tense shots to try and break him - (as by that stage both of our armies were looking very shaky), my Rajput nobles were all broken up and were vulnerable to being attacked piece-meal and wouldn;t have lasted long..   so it was time for a heroic, and historic 'Charge!' Just enough of the ‘Hail Mary’ combats at pretty even odds came off for me... with the Rajputs exhausted, plenty of casualties, but in posession of the field of battle. (Would have been something like a 17-8 in competition terms),

It really came down to the wire...  if a couple of my combats hadn't come off, I was toast next bound. Classic moments were as my elephant general smacked the opposing swordsmen up, his neighbouring elephant killed my skirmishing javelinmen – both elephants advanced past each other, and in the next bound I got to rear end his elephant at 6-3 in my favour (which sadly...for me.. didn’t come off...) the rest of the game saw his elephant chasing my general backwards across the table to his base-line...  great stuff, cracking game, and a load of fun.