As Admiral Akbar so pithily noted, sometimes things that look great on the surface are hiding unforeseen hazards.

As I become more familiar and comfortable with 3d printing, simple things like cleaning the plate, the print, hollowing the model, adding drain holes, setting supports and levelling are easier and easier. So I have reached a point, where I almost feel guilty if the printer isn't running. Well, that's no problem really, I have lots of STL (3d Object) files. What could be easier than slicing those, copying them on to the USB stick and cranking up the printer? And there's the trap.

Confession time. I already have a ton of vehicles for Chain of Command. As the game is primarily a platoon vs platoon, vehicles are usually just support options. You might get a couple of Shermans or a couple of Marders in a scenario, but most of the time, the tanks and armoured vehicles are just a support act. Sure, it's nice to have a UNIC whatever for 21st Panzer Division when I'm playing a Normandy scenario, or a Sherman Flamethrower. But I reckon I must have easily a hundred or more 28mm (1/56) vehicles from Rubicon, Warlord and elsewhere.

So I don't really 'Need' to be printing 1/56 armoured vehicles. Sure, I could add a Deacon or a Command vehicle, no one is going to think me mad if I add a couple of jeeps, an LVT Buffalo or a Semovente 90. But once those are done, there's nowhere to go!

So I print a few ships off for a bloke I know, he's playing Coastal Patrol (the Lardies 'Cruel Seas') and the prints look nice...  Nooooo... must resist... too many projects already.

But how would it hurt to run a few off for myself; after all, you only need a few, they won't take long to paint, a blue cloth is all the terrain you need. And bang,.. just like that, I'm downloading the rules (Too Fat Lardies Summer Special 2011 £5.50) and figuing out how many coastal freighters I might want, and whether a Fairmile D or B would be best, and where to source clear acrylic bases (or not)

And then there's the funky stuff you look at, and say to yourself - that's cool! French 1930s armoured vehicles. Laffly 80, Panhard 179, VUDB armoured personnel carriers..  and next thing you know, you're looking at Perry's French desert troops, and wondering .. Vichy or Free French? Or maybe some Foreign Legion, I am pretty sure I have some Ruffian 'Arab' types in the lead stash...   and that's it, another hare off and running!

Have I mentioned I have a Resin Kegrasse P16 Halftrack I picked up cheap on eBay, a VUDB or two, and AMD Laffly 80 all printed? All I need to find is a file for a Dodge Tanake and it's on....

Not to mention I did a bunch of 15mm prints for a friend, and I do have the 'O Group' rules...

So probably just as well I took some time out and actually did some painting as opposed to printing...

Ok, it's only two figures scavenged from the Perry plastics set, on Warbases dials and Warpainter Scenics tufts, but these guys have been hanging around for ages, so it's yet another part of the 'tidying up' of the backlog. They will most likely be Shock Markers for Sharp Practice.
All I have to do is not let the printing outrun the painting...  ha!!! 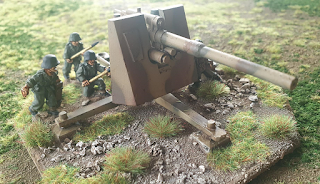 Having checked back, I see I first started assembling my 2 Battalion Argyll & Sutherland Highlanders for the Malaya Campaign back in December 2019, so 18 months later, I have finally finished these guys.

Of course, as a wargamer, no platoon is ever finished, and I found myself printing off a 1/56 Marmon-Herrington the other day/ So there will be one more vehicle added, then that's it. I promise. No really, stop laughing there.


The figures are from the Perry Desert Rats plastic set, with additional heads from Woodbine. I'm quite pleased how these turned out. Looking forward to getting them into the jungle.