Out of the blue, sometime before Christmas, number one nephew announced that he loved the look of Achtung Cthulhu. So what is an uncle to do except encourage him by getting him the CoC rulebook and Achtung Cthulhu as a present.

Of course, as I was trawling teh Interwebs for content to encourage him, I saw a bunch of painted miniatures and was struck with nostalgia for the original Cthulhu I was playing in Glasgow in the early 1980s. Back then, I had a bunch of the Grenadier figures, which now retail for silly money on eBay, and thoroughly enjoyed painting them.

Temptation is never far away, and before I knew it, parcels from Moonraker and Northstar had arrived, hard-fisted pulp detectives and brawlers, clergy and lizard men. I rather enjoyed painting these, and I would like to think they have turned out a bit better than my 1980s efforts!

I experimented with oils on these guys. It's hard to see on this picture, but undercoated a brown, then oil that I then partially rubbed off.

As promised, I hacked away at another batch of figures for the AWI and got them to a finished state - though when I look at the close-ups, some of them make me shudder.


Finally, I also received my decals, so managed to finish off some British armour for Chain of Command. 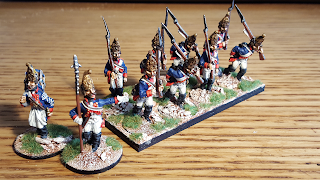 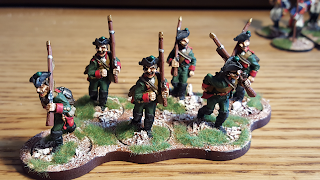 I have quite a few other 'units' which are nearing completion, so with a bit of discipline, I should have a few more to post over the next week or so. What with the buildings that I have been working on, I should have a decent chunk of the forces I need to put on a game.
Posted by Doug at 17:02 1 comment: