Tuesday saw Martin at my place for another game, and despite the chaos, with holes in the ceiling, a ton of stuff from the shed in refuge from the leak in there, plus my office.. I was relatively well prepared this time, with laminated QRS and rosters, markers etc..

Sharp Practice in the American War of Independence, I mean, I painted up another six groups of 'Patriots' - so I had to use them, right?

I even managed to put together a scenario.. 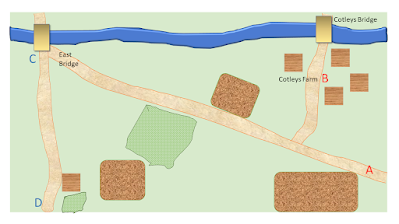 Very simple. 1779, An important, and importantly loyal, personage was stuck at Cotley's Farm (B) with a broken carriage wheel, and escorted by two groups of British Light Infantry. One of the servants had unfortunately snuck away and alerted the local Militia, who could deploy immediately their leader token turned up at East Bridge (C).
After two turns the wheel would be repaired and the carriage able to leave. It would move at the end of each turn (in Sharp Practice, the turn of the Tiffin card, or in this case chip). It could move 1,2 or 3 d6, but rolling two ones, would mean the wheel breaks again, so go 3d6 flat out and risk breaking down, 2d6 for a much lower chance, or the safe option and trundle along at 1d6 per turn. (As it happened in the game, the Carriage had the route blocked, and so was happy to minimise the distance moved.)
At the end of the first turn and each turn thereafter, each player would roll for the arrival of their reinforcements, the Patriots at (D) on a roll of 4,5 or 6, and the British player at (A) on a 5 or 6.
The forces were fairly standard.
Patriots:

How did it go? 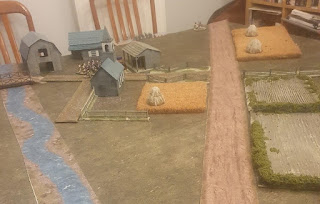 The table viewed from the American end, around East Bridge. Just visible are the British light troops, and in the distance the British deployment point on the road. 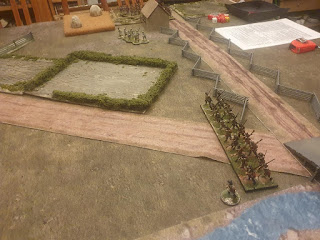 And as the first three turns progress, the Militia in the foreground were rapidly joined by Colonel Collywobble and Sergeant Bellwetherick, just appearing in the distance, while the British forces resolutely refused to roll more than a 3 and add their chits to the bag. 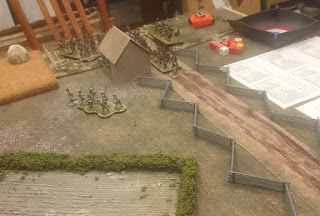 The State Line appear behind Collywobble, and still no sign of the British regulars and skirmishers. 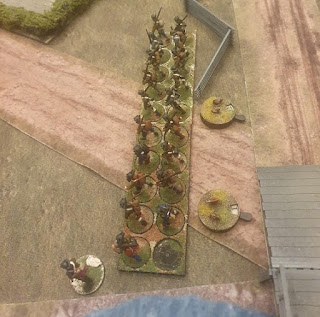 The first exchange of fire comes between the British Lights and American skirmishers, a very uneven exchange which saw enough casualties to the skirmishers to force them to pull back, and they were effectively out of the game.

After this early success, the British lights decide they need to do something before they are overwhelmed by numbers, and despite the long range - present and fire a controlled volley, hoping to do enough damage to take the Militia out of the game before the Continentals and State Line can get into action, but the British volley must have been affected by damp powder or something - and they manage to kill only one of the militia and inflict a few points of shock..   Lieutenant McCrippen hopes it isn't going to be one of those days... 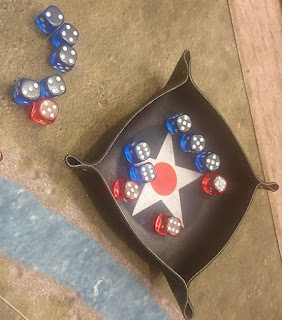 But it is.....   those militia seem to be phenomenal marksmen and the return volley cripples the British Lights 4 dead and 7 shock.... another exchange and it is 5 dead and 9 shock... 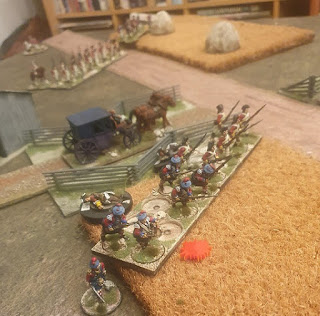 Just in time as the British player (me!) was wondering how I was going to get out of this, I finally managed to bring on the Captain and his regulars, with Lieutenant Allen on the flank. But the Lights were so badly damaged, I had to pull them back into cover behind the farm buildings to rally off shock..

The two principal formations meanwhile manoeuvered into position and started to exchange volleys... I pushed the Lieutenant out to the left of the British regulars, hoping that the skirmishers might pick off an officer and dance invulnerable on the flank of his formation, or force them to detach a group and diminish the fire the regulars were receiving.

At first the British seeming to have a charmed life, inflicting shock and casualties on the Continentals, seemingly with impunity. 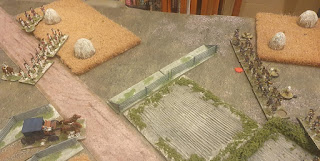 And then it all went horribly wrong for Captain Farthish...

And I stopped taking pictures...

Martin pulled back his damaged Continentals, the State Line lined up behind the central hedge and with a stunning volley, badly damaged Lieutenant Allen's skirmishers who were forced to pull back. I tried to bring my Lights back into action, using comand chits (flags) and interrupting the Militia with a volley but to little effect, causing nothing but one shock.

There then followed two turns, where in one I got one command chit while Martin was able to activate all his leaders, and rubbing it in, a bonus activation. The British had to take a withering hail of fire without reply...   and so Captain Farthish decided that discretion was the better part of valour, and with casualties and shock mounting, and no real prospect of victory, withdrew from the field.

And what of the carriage? Ignominious capture by Sergeant Jonathon Bellwetherick and his reduced group of skirmishers.

A sad scene for Loyalist sympathisers, but never fear, Farthish shall return!

Forced into a change of venue as plumbing work was underway at my place, Martin put together a very nice table that just screamed 1945 Berlin or Stalingrad or as I eventually decided - Kharkov 1941. 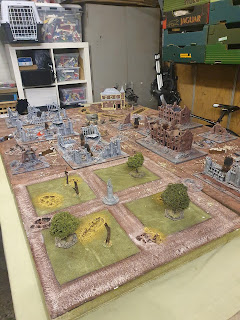 Great looking table, lots of scatter terrain. Using an attack/defend scenario from Chris Stoessen, (Loosely)! I had a Green Soviet Platoon, with supports in the form of 4 entrenchments, a bunker, a MMG and a 47mm AT gun. Martin had a 4 squad German platoon and elected to take a StuGIIIE, a Sdkfz222, and a flamethrower team. For Morale, my Green troops rolled a 6 for a Force Morale of 9, and Martin's Germans decided they hated street fighting and rolled a 1 for Force Morale of 8.
The patrol phase was relatively uneventful except  I ended up with an advanced patrol marker on my left, as did Martin. I hadn't considered how exposed it was as his vehicles could deploy (and if wheeled move) on any road. Sure enough, with initiative, the sdkfz222 arrived on a road, rolled 14 on three dice and trundled straight on to my leftmost JOP. A quick morale hit of -1. Oops. I wanted my AT Gun in the bunker on my right, so my only option was to deploy the MMG and hope to drive away the armoured car. 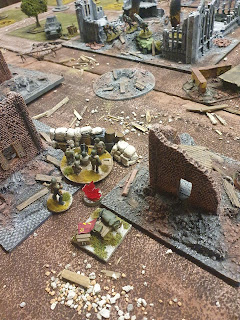 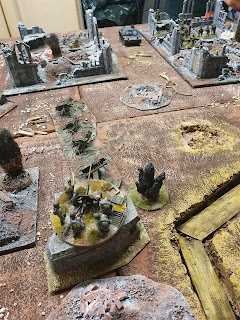 and here's more trouble, a Stug advancing on my right. with an AT gun that rolls this for attack dice, repeatedly through the game.. 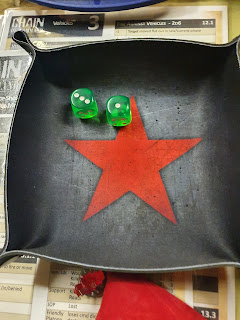 And when it does eventually hit, it rolls 6 dice for damage, needing 5s and 6s... 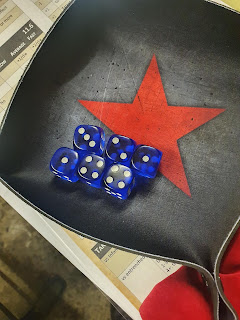 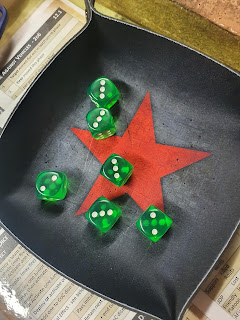 And now Martin has deployed a squad from his left hand forward JOP directly into the sturdy building on my right flank and opens up on a newly deployed Soviet squad. The Germans are in the ruined buildings to my front, and with my left-hand JOP gone I am having to deploy deep and manoeuvre to try and flank them. The bunker is holding on well, but the MMG is being peppered, and I have to bring on the Platoon sergeant to try and rally off shock.  Bringing on my squads, even behind entrenchments is a gamble - as Green troops they will get massacred in a firefight with German MG34s in the heavy cover of the ruined buildings. 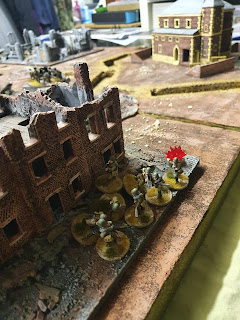 I'm finally forced to do something - the MMG team is wiped out, and a fresh squad is forced to deploy the AT in the bunker and Stug have exchanged hits, but the bunker is now at risk of crossfire, so I deploy a squad to engage the Germans in the right hand building.  There are now two uneven frefights I am likely to lose, and my third squad is still sneaking between buildings trying to work their way to my left under cover. 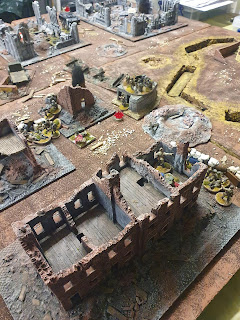 And then the dice gods smile on the Soviets - I roll no less thane three consecutive double sizes giving me another phase, a total of 4 phases of fire uninterrupted, enough to break the morale of the German squad in the house on my right, another squad on my centre left and attempt to throw grenades at the 222.  I use my Chain of Command dice to end the turn and the broken squads rout..
Martin gracefully conceded, and I felt like a very lucky escape!
Very odd game, and while I couldn't hit the side of a barn with the AT gun, I more than made up for it on the dice luck with the double phases at a crucial time. At that stage I was in losing firefights, had no adequate answer to the 222 on my left and had been incredibly lucky none of my leaders had been hit with all the lead flying around.
Like many other CoC players we might think about house rules for multiple phases.
On the painting front, it felt like I had ben painting Jacobites for ever, so as a change from painting 18th Century infantry, I thought I would paint some 18th Century infantry... 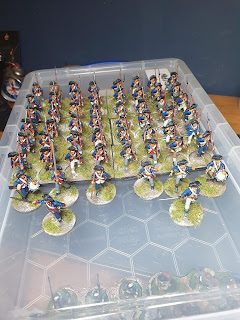 American War of Independence 'generic' blue coats, three groups faced red, and three buff. All Perry plastics. The last couple of Sharp Practice AWI games, I have felt a bit limited in options for the Colonists, so this just adds some flexibility. Very quick and dirty 56 figures. 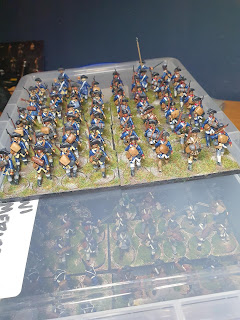