Excuse the 'GW' style post title, but some time back, I looked at my Late War German lead in 1/285 (6mm) for Blitzkrieg Commander II, and realised I was missing some of the iconic tanks for the late war period. A quick visit to the GHQ website.. (curse you internet for making this too easy..) and a short time later I had a parcel.

They have been sitting on the shelf in the man-cave for some time, but today I hauled them out, and reached for the superglue... 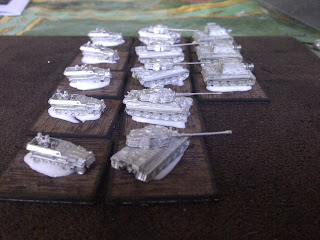 One has been set aside for Dave, whose LW Germans I played against on Thursday night with my LW British battlegroup. The British commander (me) set up with a cunning plan for the attack from the opposite edge, only to find the entire German army coming in on the table edge to my left.. oops..

Anyway, as you can see here, the group is led by three Sturmtigers, equipped with the 380mm mortar. (You are only allowed one per battlegroup in BKCII, but who knows when you might need another couple?)

Behind them are 5 Tiger II or King Tigers, for the defence of the Reich. And if Thomo uses his entire Guards Army, they will be needed. I also have the GHQ Sdkfz 251/C 2 & 9 half tracks with 75mm howitzer x 3 and mortar carriers x 2. Fiddly little things to build, as were the shell hoists on the Sturmtigers. Now on with 15 M3 half-tracks that will equip my Allied forces. (I figure I will base them all the same, and can use them either with my LW British, or with my LW US forces.)

So on the weekend (Sunday), I played in David Lawrence's 'Landwaster' DBA 2.2 competition. I was lucky enough to pick up 3rd place with my Ottomans. And coincidentally, David had a whole bunch of Essex army packs there, and with my 50% off voucher, I decided to add to the lead pile at bargain prices. The variety wasn't great, with a variety of Latin, Campanian and other Early Roman types, Carthaginians, and Knights of St John (KoStJ). There were also a few Hellenistic types, but I have the Tin Soldier Macedonians in the painting queue already, and they would be completely incompatible.

I didn't fancy the Early Latin types, all Blades and Spear, and looked at the KoStJ - but Essex had done one of their mix and match jobs, and the packs inside were from a 2-3 Century range, everything from c1200 Crusaders, 14th Century caparisoned horses, to Late 15th Century fully plate armoured dismounted knights. One to avoid I think. Anyway, I spotted a Later Hebrew pack - the I/34b List in DBA with 2-horse chariots, loads of Auxilia, (medium infantry that fight well in bad going, and are targets for everyone in the open), a couple of Psiloi (light infantry skirmishers) and a single element of Spearmen.
Not world-beaters, but interesting. They have an aggression of '1' (it ranges from 0-4) so have a very good chance of being the defender, and have 'Hilly' as their home terrain. This is a bit of a two edged sword. Hilly terrain is likely to have a good amount of bad going, which is all good for the Auxilia, but the disadvantage of hills is that they block visibility, which affects the General's command range. As Auxilia have few combat advantages, they rely heavily on movement to isolate, surround and destroy enemy. That all takes PIPs - which is where the problem arises. If the General can't see his troops, then it is very difficult to manoeuvre.


So I am trying a slightly different tack on the painting for these little guys. Monday night, they were cleaned up, spare shields and weapons added, then glued onto bases. Tonight, I used a commercial 'Mocha' tone enamel spray as a base, then a heavy wash of GW Badab Black. I figure with bronze, flesh and white, with a few blue touches, they will be very quick to finish.

So yes, the Ottoman camp is done. Couple of fly ropes, some tufts, and some work with paint pens. I am pretty happy with this, just wish I had a few figures spare to add. 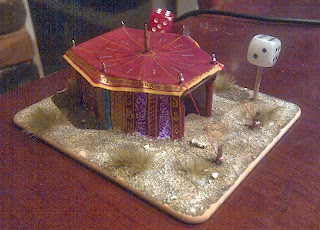 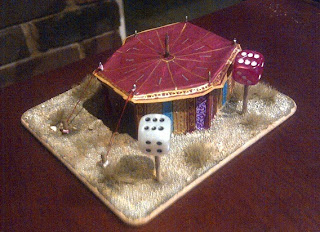 Guess What? - Pretty obvious by now..

Paint applied, this thing looks like it might fly by Sunday..   some more drybrushing, a few grass tufts..  wish I had some harem figures to put inside.. 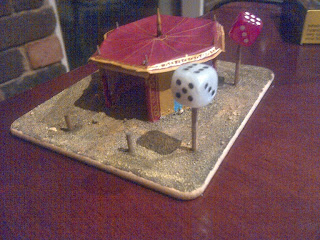 amazing what some paper, paint and cocktail sticks can make...  few more details, guy ropes and this thing is wrapped up.
Posted by Doug at 10:18 No comments:

I think it might be a little easier to guess now..  sort of taking shape. 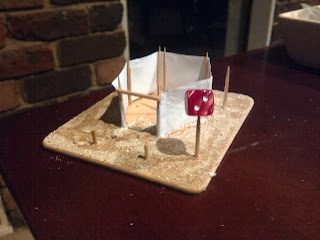 PS.  I hadn't realised before how hard it was to drill holes in dice...

So I was playing around making something tonight... 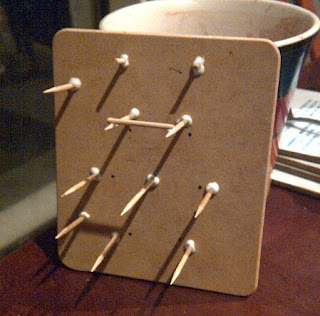 And the only clue is..  it's still incomplete..

So, a question raised by my mate Thomo tonight had me thinking. I have a wargames executor named in my will. I guess it goes back to being about nine or ten, and walking to school, I spotted several cardboard boxes placed out for the bin men, (garbage executives or waste disposal operatives or whatever)..  and noticing dozens of immaculate 1/600 ship models being thrown away..

Now my assumption is that a lifelong ship modeller of excellent skills had died, and his partner or kids had not known what to do with a collection, and it had been simply put out for disposal.

And that seemed tragic..  not the waste so much, but that all that care and love and interest and dedication simply was lost.

So my Lead Odyssey as a wargamer has now reached a point where I look at the many projects, and wonder whether I will ever finish them before I am finished.

I am now 49 years old. By biblical reckoning (three score years and ten)  I have 21 years to go, and at the rate I paint - will I ever even finish the lead I already have?

Regardless, for anyone reading this blog, and I have to assume you are wargamers; as I suspect it would have only limited appeal to cross-stitchers, have a think about a few things..  will you finish it, who will get it..  what happens to it?

Ok, I decided that enough was enough and I am calling it on these guys, as done.

I have a bunch more to do as the start of a DBMM army, but I now have these ones ready to go for Landwaster in two weeks time. Perhaps some kind of a record for me having them ready with so much time to spare.

More Work on the Ottomans

Made some significant progress with the Ottomans. I am finding that they are a lot darker than I wanted though. 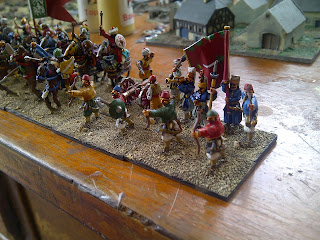 The flags still need some work. 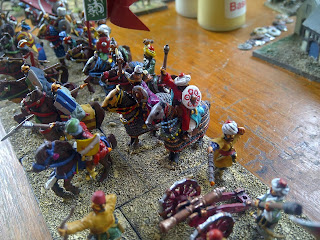 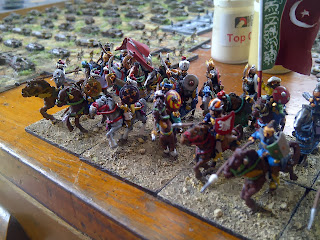 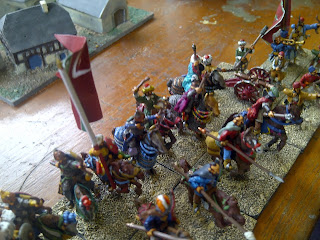