A couple of people have been kind enough to ask if I have any better pictures of the Franco Scots figures, so here is a gallery for the army..    though I have to say it is somewhat daunting to paint these guys and be pleased with the results, then see the original magnified 5 times...   As always, you can click on the pictures for a bigger version.

Well, that's it, thanks for your forbearance if you have made it this far.

Well, that's it. Cancon 2016 done and dusted for another year. I took the Franco Scots as they were my most recently painted army and looked pretty.

The list represented the joint French & Scots forces in 1421 campaigning against the English in the 100 Years War. Historically successful at Bauge, they were then defeated at Verneuil but many Scots continued to serve with the forces led by Joan of Arc. I chose to try as much as possible to replicate named individuals present with the forces, and very much enjoyed tracking down the correct heraldry, this site being invaluable.

The list I worked out was a 'courageous choice' - relying as it did on 3 allied generals under the overall command of the Earl of Buchan as CinC. The list was as follows (in DBMM terminology).

Scots Allied General - Hay Reg Kn(O)
1 Scots knights and men at arms Reg Kn(I)
4 Scots feudal archers Reg Bw(O)
5 Highland archers Irr Bw(O)
3 Highland axemen Irr Bd(I)
+ Baggage
The competition itself was three days and we had one visitor from the UK, as well as players from Melbourne, Queensland and South Coast NSW.  All up 17 players played over the weekend.

A day of mixed fortunes, where the blessed St Joan (to come) failed to entirely smile on us..

The Franco Scots encountered marauding Ottomans ably piloted by Greg Russell..   and were unable to compensate for the opponents slipperiness and generally inability to stand still and be thumped..    I had one unreliable ally..   but unfortunately the damage I did was spread across too many ottoman commands – and his army was bigger, so we each lost one command, but break transmission disheartened another of mine. I had my chances, including one glorious bound with 4 hard flanks – factors up (4-2 x 2, 4-3 x2) but did not win one! Greg played well (as always) – getting into my baggage, while I finally smashed the Serbs, his other commands had lost some but nowhere near enough, took out one command (transmissioned disheartened to another) and using the superior manoeuvreability well, and it eventually timed out at 15-10 to him  - (just like nailing jelly to a tree).

The second game against Michael Stone’s Massagetae saw his elephants cause havoc only to be eventually cut down by the artillery with a fortunate 5-3 die roll against his mountain elephant ally general, my pip dice good, combat dice some very wild swings.  Ultimately, I survived to take out a bunch of broken up light horse and one Cv(S) with Bd to take him over army break point, but carelessly losing the Kn CinC to Cv(S) at 3-3 cost me a command, attrition to the other Scots command added to this made them become disheartened, and tipped me over 30% losses. 18-7 to me.

Another two cracking games...  first up, and one I wasn’t looking forward to the matchup..  Picts.  Wayne is a very experienced player and has his army well worked out in deployment and how to use it. We ended up with a two thirds empty table. My army was stretched thin covering even part of the frontage, and though I knocked over a lot of elements, (14 or so from one command alone) they were virtually all Pk(F) & Ps(O), so not enough to even Dishearten one of his huge commands. By contrast a couple of bad dice splits cost me enough casualties to dishearten one Kn command after I charged his Saxon warband..   a 6-1 killed the knight next to my general, and 6 pips for the Saxons next bound let him hard flank and double overlap the general… inevitably - I rolled low, and that was 6 ME down, with a dead cavalryman, enough to dishearten that command.

This was a great game, and I learned a few wrinkles. It had everything, me countermarching on a lateral road – including the baggage getting away from marauding auxilia…    a delayed command, and generally great fun. It would appear that artillery – while not able to target a Psiloi in front edge combat, if side on and able to trace through it, can shoot an enemy element beyond it. I had never seen this before, and it caused a bit of a grin. The game timed out, probably fortunately for me before he broke that command, and the point for disheartening the knights (neither of had lost 10%) made it 13-12 in his favour.

Second game was against Charles Watson, another player with an Ottoman army. Charles was a very good player of DBM though still inexperienced with DBMM.  I was the defender and cramped the table up, then Charles doubled me and had to deploy first. Strong wind affected his Janissaries who immediately marched away from the Bd(S) I deployed opposite, only to see me roll a 6 for that command and follow suit..  lots of tense manoeuvring – but I eventually managed to get the French Kn into the right place, start nibbling away at his cavalry and shoot down LH(F) – he pulled a feigned flight which had me salivating as he ended up with 4 cv(S) facing away, in 4 separate groups, with Kn 10mm behind them and ready to smack them from behind impetuously he proceeded to roll 5,5,6,6 for pips and crisis was averted.

Finally, the LH trying to overrun the Scots Feudal archers on my left were shot down to break that command, and in subsequent combats, I took out the other three commands in one bound.. which was a bit surprising.  I had lost just over 40% doing it though as yet again the Kn command did some damage before being broken. Final result, 17-8 to me.

Day 3
Last game.. and I was drawn against Dave Quilty, with New Kingdom Egyptian. As I was sure that Dave would have highly manouevrable chariots I invaded him bit was able to put down enough terrain combined with his compulsory waterway to make it almost a frontal slugfest.

In a bit of a repeat of the game vs Wayne, I put the Scots men at arms all dismounted up front, the French ally behind, used the Scots bow to anchor my right, and the CinC on the left, with his superior knights as a reserve.

The Scots quickly carved their way through the left hand bowmen facing them, as I manouevred the French behind them.. then in a horrible 6-1 against me in my own bound, I lost a single superior blade, and the inevitable 6 for PIPs for Dave meant that he was able to carve a hole in the centre of my lines. I brought my Knights forward to hit his chariots, on the left and right, while trying to plug the gap that opened, as in my bound all I needed to do was roll 1 up to destroy his chariots, and they would be destroyed.

I unfortunately was unable to convert a single advantage into a kill vs his chariots, even where I achieved a double overlap and was fighting at 3-1...  so while I was killing lots of his low value troops, he had huge (30+) commands, and in the meantime, I was starting to lose knights with a series of low rolls.

Finally, I made a bit of a breakthrough on my right, as Buchan himself destroyed the chariot facing him, with the help of some highland archers, and a ripple effect took out 3 neighbouring chariots.

But by this time, Keith was in terrible trouble, with overlaps and flanks now meaning that when Dave rolled up with Psiloi he killed the Bd facing him and breaking that command, this led to the neighbouring French ally being disheartened..   PIPs dried up and Dave had a number of chances to break my army.. none of which came off... time was called but we had to complete the combats...   inevitably, one of the knights which had previously survived attack rolled a 1, enough to destroy it break that command and tip my army over into defeat. Literally the last dice roll after time was called, and while it might have been a 15-10 to Dave, this converted it into a 19-6 to him.

Great competition - some very attractive armies and a worthy winner in our UK visitor - Greg Mann, who barely dropped a point on his way to first place.

Working away to finish some more Franco-Scots, these are all French Knights, today I got in a solid few hours, with a detour to watch 'The Force Awakens'.  The solid few hours got me from the horse base colour, through adding a wash, blocking and highlighting. These are pretty much done. 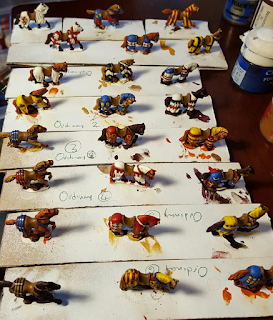 Next I match up some riders... 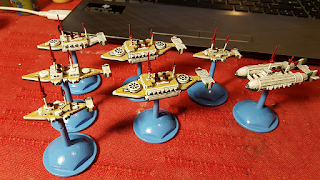