Managed to get in Game 2 (&3!) of Operation Martlet this week. At M's place again, as my home is still a building site... on the positive side, the shed construction seems to be going well, and the asbestos specialist gave it the all clear.. 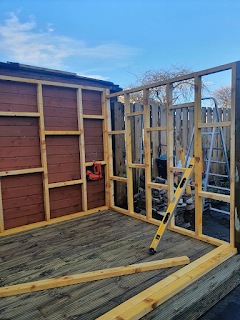 The old one was balanced on a series of slabs of concrete, stray rocks and essentially rubble. This one has a proper foundation (20 x 100mm posts concreted in). Essential if it is not to subside into the ground under the weight of the lead. I wish it could have been bigger, but the location is constrained by the deck and existing raised garden.

So Operation Martlet, Game 2...  'Pushing On' 12th SS Panzer need to be pushed out so the Scots can push on. Again a nice table.

His initial patrolling was good, getting a 6 for the number of patrol marker moves before I could respond.

I placed one JOP just behind the central house, another in the orchard on my right and a further one, a little bit back on my left. With 2 x Panzer IV the road would be my main JOP in practice.

This game we remembered to play the Mist rules from the campaign, and it was an utter disaster for the Scots. With my seven support points I had selected a second Panzer IV. Virtually none of their forces turned up, and when two turns had passed, the German Panzers roaming unopposed, and the Sherman and PIAT Team hd been irretrievably lost in the mist, Martin decided he simply had no AT capability, and pulled back. So much for Game 2.

Since the table was all set up, we pushed on and played Game 3, the Scots second attempt at this table (2).

Initial rounds saw a flurry of 5's from Martin, and the deployment of his Sherman, a squad in the orchard on my right, an FOO (ouch!) and  Vickers MMG in the upstairs window of the large brick building on the right in the picture above. Meanwhile, I had failed to deploy anything through the naval bombardment (may only deploy on a roll of 5-6).

And to make matters worse, the FOO brought down a stonk of mortars centred on the building just in front of my central JOP. (Personally, I would have waited till they were occupied..  but..)
Finally, 3d6 from Martin ended the turn, and his Sherman came off Overwatch.. and the mortars ceased. He had two CoC dice by this stage and could have kept the mortars going but elected not to...
Inevitably, I then rolled 3 x 3 on my command dice and deployed both Panzer IV and one of the reduced squads under Scharfuhrer Groll lining the hedge in front of the orchard on my right. With two Pz IV versus a Sherman this was only going to have one outcome. Martin did consider running the damaged Sherman behind the buildings and out of the fight but elected to keep firing.
There then followed a run of incredibly frustrating dice for me..  1's (no good as I had no teams), 4's (no good as I had no Senior Leader on the table, and when I decided I had to do something Lars failed to deploy due to the bombardment.. occasionally a 5, (I gradually got to 2 CoC dice), and single 6's. In the meantime Martin managed two double phases and an end of turn, deployed another squad centrally, in the meantime, moving his forces up from the orchard on my right. It felt like there were perhaps 6 or 7 phases (probably less, but it felt like more!), where I could do literally nothing in the face of the British advance.
Finally I was able to start exchanging shots between Groll's squad on my right, and the advancing Scots, but with the Vickers chipping in, I was getting the worst of it. In the centre, I could deploy into the building, but had no field of fire towards the orchard and they were threatening to overrun the JOP. I even burned a CoC dice to interrupt and try for a second round of fire on my right, but the kills refused to come and the German shooting caused very few casualties or shock.
Finally, I had to sacrifice the JOP in the centre, pull back my right-hand JOP using another CoC dice, and try to push the Scharfuhrer's Panzer IV wide on my left to start lobbing HE at the house.
Martin deployed his third squad from the JOP on my left, to protect it from the Panzer IV now threatening it, but then hurried across the road. Not hurried enough though, lagging behind was costly as the second Panzer IV opened up on the stragglers, hitting and killing the Corporal...
And then the dice roll that changed the game...  Jurgen Dieff's PzIV punched a 75m HE shell into the brick building, killing two of the Vickers crew, but more importantly, hitting a vital structural spot, and the entire building collapsed, burying Platoon Sergeant Donaldson in the rubble. (4 x 6s).
A last gasp ambush by the HQ PIAT team took some measure of revenge, lightly wounding Scharfuhrer Dieff who then pulled back.
At this point Martin called it quits, with no real AT capability left, FM down to 4, and no real prospect of pushing through. So 12th SS hold their position.
In the wash-up, with FM 8 vs FM 4, Groll's men return to duty, Pedersen is now content, his men are pleased and there will be +1 to the next FM roll, while his CO is also pretty happy and with a +3 rating will grant an additional point of support in the next engagement.
Pimpleton remains relaxed, but it remains to be seen whether he will get a replacement for Donaldson before they are called to fight again. Losses were relatively light, but his men are upset by the losses of their NCOs. FM will be -1 for the next fight.
Want to know more? »
Posted by Doug at 19:52 3 comments: