It's Freezing - and a Challenge

Having used Contrast Paints to do my Indian Mutiny figures, I was impressed with just how quickly I could get a half decent result. I do paint for effect, so I will never obtain results like Moiterei..  but Contrast works for me. I could obviously go back and add additional detail to improve the results, but it seems superfluous when you are working to the 1 metre rule.

In any case, I have long intended to paint up forces to play the Too Fat Lardies 'Bloody Bucket' Pint Sized Campaign for Chain of Command. Battle of the Bulge, what's not to like?

Over time I have picked up all the necessary figures in sales and on eBay. Taking part in the Analogue Hobbies Painting Challenge, it occurred to me that I had foolishly ruined my eyesight painting a German platoon in Peadot and Oakleaf, and that doing something simple like US infantry in greatcoats would have earned me the same points...  So I wondered just how long it would take. I bet myself a week...

So here's the result: 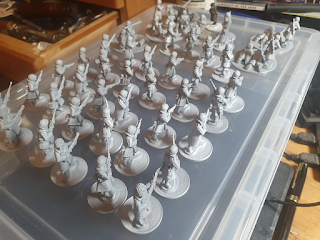 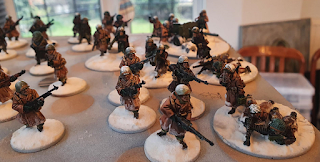 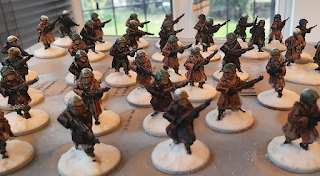 Three squads, in the rear right are Senior NCO and officers with carbines. 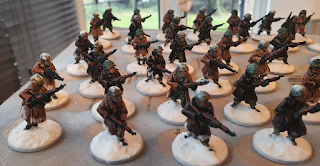 Squad leaders (Corporals) on the right with an enlisted man with Thompson SMG.

Close up of one of the Bazooka teams showing the effect of Contrast. The 57mm is a 3d print.

The snow effect is Bicarbonate of Soda over PVA, then sealed with plenty of spray varnish as Bicarb is extremely hydrophilic and unless properly sealed, will go 'off', discolour and bloat. The 3d printer is whirring away churning out Jeeps, an M16 halftrack and Shermans...  to be winterised once they have been airbrushed.

Not bad for about 4 evenings actual painting I thought. Perhaps the flesh could do with a very pale highlight, but good enough for Government work, as they say.

Next week - maybe I could tackle my 1st Corps US Marines? I should finish the Volksgrenadiers, but they are currently buried in the man-shed, which is itself packed with the extra contents of the now demolished tin shed. It would take a serious archaeological dig to unearth them... till the new garden shed is erected on the 21st.