So this weekend, I took the short trip (30 minutes), up the road to Kirriemuir, to play at the Kirriemuir Wargames Club.

Attendance was a bit thin, primarily because quite a few of the members had been to Partizan in Newark with the 'Bloody Big Battles' Gettysburg game. So we were very fortunate that Dale made a huge effort to organise a smashing big game using some of his 28mm Napoleonics.

Now in common with most wargamers, there's a touch of Obsession, a soupcon of Megalomania and certainly an uncontrollable lead lust, so the game naturally was 'Big'  - in keeping with the Auld Alliance, I took the French, tasked with defending a vital river crossing somewhere in Spain.

The rules used were General de Brigade, which I have played before, and they give a pretty good game, though to be honest, the initiative roll seems to be absolutely critical. Late in the game, the British had a series of rolls to win the initiative, and I was virtually steam rollered in one sector.

All in all a great fun game, thanks to my opponent, Chris, and to Dale for doing all the heavy lifting (literally!)

Lots of fun, classic style wargaming, and I am now keen to get my Napoleonics painted up, though as my basing is designed for Sharp Practice, it's not really compatible with these guys.
Posted by Doug at 20:48 3 comments:

Number 1 nephew is all excited about Team Yankee, I think because of all the cool kit. Plus he's a bit of a tank nut (I foresee a trip to Bovington sometime in my future). Anyway, he's been buying himself a fair bit of East German kit to do Team Yankee in 15mm.

Regular readers of this blog (are there such creatures?) will know I did a whole lot of 20mm Cold War stuff, which is sadly, still in Australia. But if there's an excuse.. ok, 15mm it is.

Of course, being me, I couldn't just settle for something easy as an opponent, so I decided, rather than Brits, or West Germans, or US troops, I would do Danes..   they have cool kit, like Unimogs, Walker Bulldogs and even better.. that all time classic.. Centurion tanks! So an order has gone in to QRF.

So I have the softcover Team Yankee rulebook on order, some Zvezda M109 for artillery support, the QRF gear and an F16 all due to arrive in the post, but I visited HobbyCraft today, and there was the Revell 1/100 Harrier. Wrong version, a pre paint, dated 2010, but a Harrier none the less. Still one of my favourite aircraft.

It's quite a nice little snap together kit, I did use glue, and it went together in 20 minutes.. 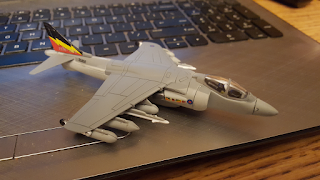 The observant will note a couple of minor differences, the nose cone got the bulges taken out, and the outrigger wheels were moved back out to the wing tip, Then it was paint out time... 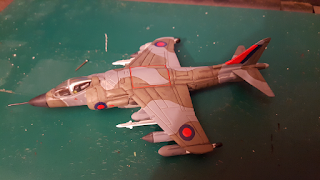 An hour or so later, and this was the result. I have to go back and tidy up the paint job, especially the tail, add some further details, and  make a flightstand, but not bad for 1/100. If you squint your eyes, make some whooshing noises, it's pretty much "Good enough for Government work".
Posted by Doug at 00:53 3 comments:

Firstly. apologies - had camera difficulties, so no pictures. But Me and 'He' - aka First Nephew, took a drive to Falkirk for Carronade 2017.

I have to admit a certain fondness for Carronade. It is the first UK wargames show I visited when I got back (last year), it's large but not impersonal, great traders - big shout out as always to Warbases, and also to Lancashire Games, top blokes. When freedom comes a) 'don't piss in the water supply' (Alex Harvey), and b) I reckon we should ask for the border for the Scottish Soviet Peoples Republic to be about as far south as Manchester...   good people.

Ok, so the flea market.. 3 painted and based Irregular Viking longships - 1 squid, 3 sets of 1900 French legionnaire, tirallieur, 12  mounted Chasseurs Afrique, a Nordenfelt gun and a dozen naughty Arabs = 9 squids...   bargains! No idea what I will use them for, but can't resist at that price.

Then Renedra fences, an 'American Church' by Perry, and enough to do an AWI 16th Dragoons unit for Sharp Practice. 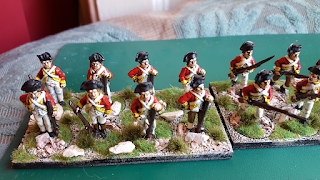 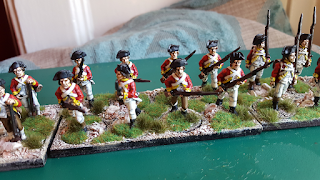 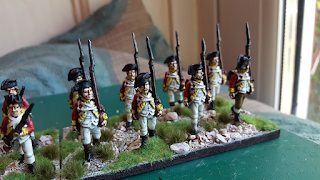