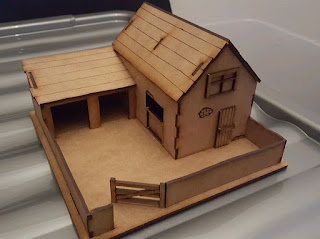 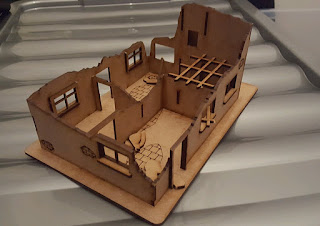 So for a grand total of £14.50, two usable buildings..   that could be pretty much 1740s on. I am now wondering how to finish these, and whether I could make them generic enough to do double duty from AWI to Northern Europe. The main issue would seem to be the construction methods and roofing. As I intend to update the roofing with cardboard shingles/tiles, it's just the underlying wood vs brick that creates issues.
Posted by Doug at 18:28 No comments:

So here it is, 2017. One can only hope it is an improvement on 2016. Not to say that there were't some good things about 2016, but on the whole, best left behind. I got a bit of painting done, but interrupted by moving continents, it would have been nice to achieve more. My final tally, according to Vis Lardica

So I thought I would post some ideas about plans for painting in 2017. There's a lot of toys already lurking around, so here's where they are at:

You will notice no mention of terrain. Well, to be honest, I have no room to play in this place, so I will be expecting my playing to all be at club venues, or other people's houses.  And the final tally?