After a lengthy hiatus, when I got distracted by the 'Ooh Shiny' new lead thing, I finally returned to my Houston's Ships. I got them based up some time ago with some plain white card I had lurking around, put some ratlines etc. on, and they sat there for ages. Now that Cancon and the Sui saga is finally over, I have been looking at the lead pile, and decided these would take minimal effort to finish, so why not?

First step..  a rough mix of Paynes Grey and Powder Blue. Not too well mixed, so applying a thick layer leaves streaks of the lighter blue. Hopefully you can see the effect in this picture.

Next step is a thick 'slap' of thick acrylic gloss medium. It dries clear, but the picture below shows how it looks when first applied, being white in colour. Useful as you can actually see it to apply it, and you can work up bow waves and stern turbulence. In the background are the first two bases to be done, and you can see how it is already starting to dry clear.

Once these are quite dry (about 2 days) - a simple drybrush of the wave peaks followed by gloss varnish, and these will look the business, as well as letting me tick off another line in the great lead 'to-do' list..  hurrah!

So that's it..   as our Saffer friends would say.. 'finish und klar' (or similar)...   Cancon 2013 has been and gone. I did get to play two games on the Sunday, for one win and one loss...  but otherwise I was confined to unpiring - remarkably trouble-free, and organising - which wasn't too bad.

Not too bad except for the bit about wargamers being like cats, you have no sooner rounded up two, when three wander off.

I swear, if they were actual generals, they would turn up three days late for the battle, 50 miles from the right location, and missing half their army.

Regardless, we originally had 24 entries, two pulled out when they had family issues, and one couldn't get a flight from Queensland thanks to extreme weather conditions. So the first day saw odd numbers, and I took the byes to give us 20 players. Sunday saw another player arrive - and I managed to get two games in as one of the 22. Then Monday, finally, and another player had to leave early - so back to byes for me.

Everything seemed to go very smoothly, bar the draw software giving up the ghost on Sunday night with players appearing and disappearing. I managed to coax it into giving me the 5th round draw, and then it simply refused to work. The sixth round was done manually with only minor swearing and the top games more or less picked themselves.  The competition as a whole was very easy to run, despite that - and it looked like everyone had a great time.

I can honestly say that there was not a single incident over the three days that I would characterise as bad-tempered (other than me before coffee on day 2...), and watching some of the games, it was very pleasing to see the truly gentlemanly spirit in which they were played.

Mark Lauchs received the Encouragement Award. The three place-getters received discount vouchers from Essex Australia (thanks Ray), and a variety of very nice prizes were supplied by Micks Metal Models (Mick Sellman), Miniature World Maker and Olympian Games (Dean Bedlington), which I handed out as round prizes  - for such things as: 3 ones for PIPS, loss of a general, opponent rolls 3 sixes for PIPS, first player in that round losing an element to a 6-1,  etc. Prizes included some Casino dice, some very nice Peter Pig scenery, and a complete Baueda Roman fort.

Going into the last game, there were at least 4 players who could have won it. Andrew Card, who was leading at that point from Glen and Aaron, went down in a crushing 25-0 defeat to Aaron (I saw his combat dice, they were truly terrible)  - and dropped out of the top runners. Tim Montgomery put up a very creditable performance with a bizarre (gimmicky) Classical Indian
that included war-wagons, artillery, superior baggage and stampeding oxen, and took 13 points from Glen's massive Sumerian army, which consigned Glen to 2nd place, and Ian Baxendall also had a smashing 25-0 win in the last to leapfrog some other very strong contenders.

One of the really nice things was the variety of armies that did well..  so while mounted armies were popular, a solid Sumerian pike army was second, and it was great to see we had the Alpha and Omega of DBMM armies present, in having the first and last lists played..  Book 1 list 1 (Early Sumerian) to Book 4 list 85 (Burgundian Ordonnance).

The only thing I would do differently is re-write the draw software so that it works even when people can only play some days of the comp, and quite possibly make the 3 day comp, five games only. This would give plenty of time for presentations and the like on the final day for a more leisurely finish. Our last game was somewhat rushed, as some of the players had planes
to catch and services had been badly affected by monsoonal rains and flooding. So I think it might be a good idea to review whether 6 games are necessary when the field is only 24 players.

And thanks to Michael Stone for some piccies...

So the 'Worlds' is working well, 22 players today as Zach Russell was able to make it down to play.

After Day 2, there are 5 players with reasonable pretensions to the crown, with two games (and potentially up to 50 points up for grabs)...

It would take something of a miracle for anyone else to slip in, so I think the winner will have to be one of these 5...  Quite a mix of armies too.
Posted by Doug at 13:37 No comments:

The 'Worlds' is on at Cancon - and Day One of DBMM saw 20 players battling it out. Unfortunately the Cyclone in Queensland meant that one player couldn't fly down, and family emergencies took another two players out. So from the initial 24 limit, we were down to 21, and I took the byes as the Umpire.

I have just attached the pictures I took..  Hope you enjoy.. 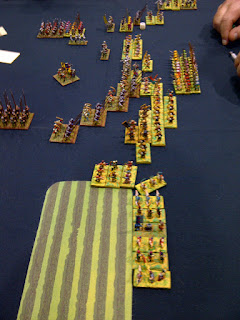 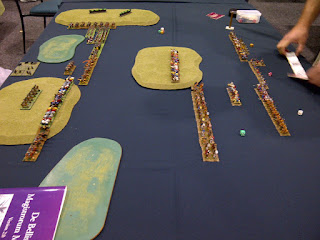 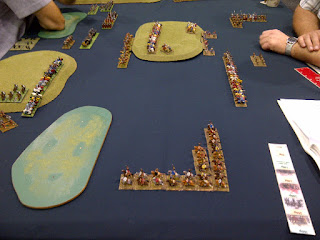 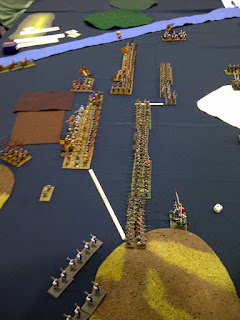 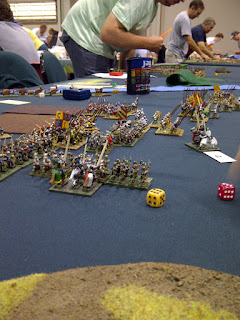 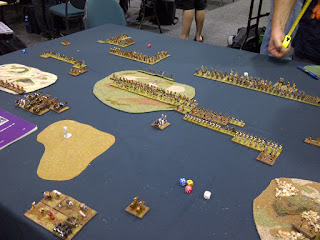 The countdown is on in earnest. I have now 4 nights to complete the Sui for Cancon. Here’s the state of play… 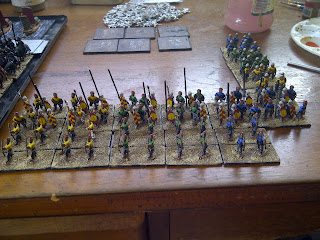 The infantry grouped up, I eventually decided to do three different regiments in different tunic colours. Makes it easier if I want to split them up between commands. 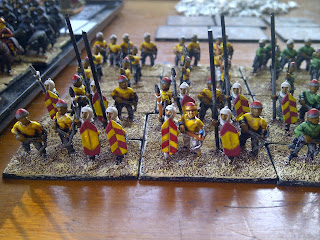 Spot the ones already finished as trial pieces.. 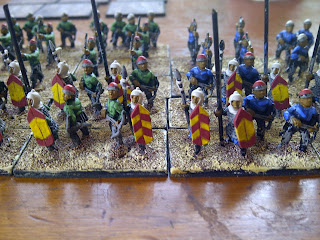 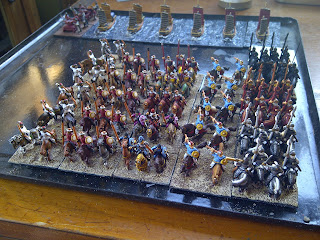 The mounted, ships and artillery at the rear.. 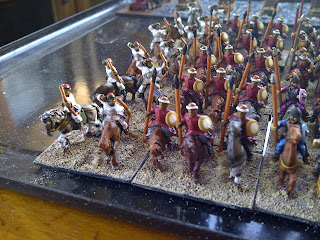 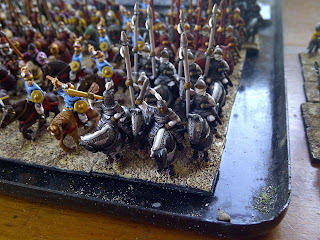 I suppose I could put them on the table now, they all at least have some basic paint on them, but I really want to get them to a reasonably finished state - otherwise history suggests I will never go back and finish them properly, and I will be left with another 80% finished army.

Well, a pleasant surprise, I ordered Maurice on 2 January, and it was delivered to my office today 11 January. 9 days from ordering US to Oz. Well done Brigade Games. 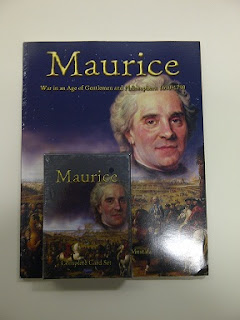 Cancon is also looming. Looks like we will have at least 24 players for DBMM2 this year, which is very pleasing.

Hogmanay and Other Things

Well, that's it, the New Year has been and gone, and 2013 is beckoning. We survived the Mayan Apocalypse and now, in common with just about every other wargames blogger, I am contemplating wargames plans for the next 12 months. The fabulous Man Cave is now starting to get organised, and moving all the stuff around has given me a pretty good idea of what I have in stock.

So what's in store for 2013? I am planning to not make any wargames purchases at all this year - with the possible exception of the 'Maurice' rules - from what I have seen, on blogs and elsewhere, plus the reviews, it provides a very nice robust and fun game. I would really like to put my 6mm WSS on the table, and while I have Polemos for these, or could use Horse Foot & Guns,  Maurice looks like it might be a winner.

[Edit] - ok, just bought them - I really have very little self-control, and the Brigade Games New Years offer got me 10% off plus flat rate $15 international shipping - [/Edit]

The other exception might be materials for my terrain building, and probably some decent storage containers for completed minis so they can sit happily on shelves, and I can dump the weird assortment of cardboard boxes.

As for painting, no hard and fast schedule as yet, but I am thinking that I should actually finalise some of the half-finished projects, as at least then, I can see real progress. I expect the next few things to get done will be:


After that, all bets are off. And I plan to try and do a few DBA armies as well, for amusement. I have perhaps thirty unpainted ones sitting around, so perhaps an army between each other project. They should only take a week or so for each, so I could get quite a few done in a year.

We shall see..  but I am determined that 2013 will be the year where I paint more than I buy!

Happy New Year to one and all.
Posted by Doug at 14:11 No comments:

In what could well be some of my last games of DBA 2.2, I dragged out the Teutons for a game against Thomo who was in Canberra for New Year. It also gave him a chance to have a couple of games using a proxied Hungarian army, which he will be using at Cancon.

I wont do a report here, as Thomo has already posted one on his blog..
Posted by Doug at 13:47 No comments: