I am not quite sure how many different sets of WW2 rules I have played. I do know my first were home-made, then the first published set I ever used were Charles Grants 'Battle- for Practical Wargamers'- courtesy of Mr Carnegie and Blackness Library, early 1970s. More recently, I have played Blitzkrieg Commander (BKC), Airfix Battles, some hex based games whose name escapes me and Chain of Command (CoC). In between there has been Rapid Fire, WRG 1925-1950, Operation Warboard, and several others.

My favourite set at the moment is CoC, but it's principally a platoon level infantry game, other arms are support only. So no real chance to get squadrons of tanks on the table, and a very different command experience from other sets. I purchased Dave Brown's O Group, thinking it would give me the opportunity to get a few more AFV on the table and decided that as I already have WW2 forces in 28mm, 20mm, 15mm & 6mm, O Group would be perfect for 10/12mm.

Why another scale? Well, I am limited by the 1800mm x 1200mm table top I can squeeze into the magnificent man-shed, and if I didn't want hub to hub Shermans, then I needed to operate in a smaller scale. I have roads and other terrain in 15mm and buildings in 6mm, which visually will work. Plus, in 10/12mm, no one expects painting to be anything other than impressionistic. Finally, I have a 3d printer, and there are excellent free files available for most vehicles for the major combatants. Simply rescaling 1/100 print files (15mm) to 66.7% gives me a load of options, albeit at the cost of some fragile prints. I believe Pendrakens excellent range of vehicles are scaled to 1/150, so these are directly comparable.

My first two prints were 1944 & 1945 US, with an opposing Late War German Kampfgruppe. O Group generally uses 2 models for a troup/squadron, so common vehicles I printed off in sixes, with pairs for the other options.

Of course, my usual opponent Martin, having introduced me to the Cold War rules, 7 Days to the River Rhine (7DttRR), then decided to try out it's stablemate, Iron Cross. I might write up my thoughts on these in a future post, but they seem to work quite well. I still want to give O Group a decent try, but between BKC2, O Group and Iron Cross, I have plenty of options.

Naturally, Martin was also keen to get some new toys on the table. He already has substantial British & German forces for Later War, so I sorted him out with a few Soviets.. (although I did put my foot down and insisted that no one needed a dozen IS2..) 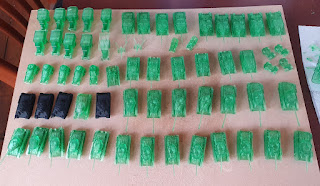 My next post will show the Germans...  hopefully,  soon!

Ok, hands up all who thought I had been painting figures for the taking of Scinde?  Well no, although close. But the sin is that I have been remiss in updating the blog since April.

It isn't that there has been nothing happening. There's been a lot happening. I just haven't found time to blog about it. There has also been a lot going on in that other life outside wargames world. My nephew, who I have been very close to for years, graduated, and was elected to the local council, I've been gardening and building things. Hopefully, the sale of the Australian House will go through and that will let me focus on other things. 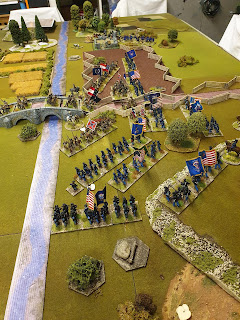 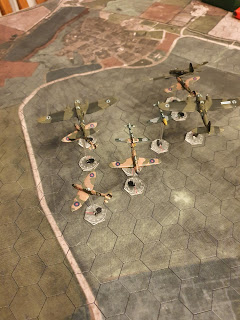 The Sudan, 28mm Black Powder, Martin's again.
I've added to my Indian forces..  still some finishing to do..

Wargames Atlantic Afghan Warriors, an impulse buy but soon to be done. 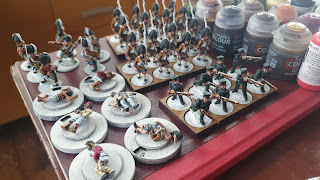 AW Highlanders, Foundry Ghurkas and Casualties...  soon to be finished
I've been starting to get some buildings and terrain done.. 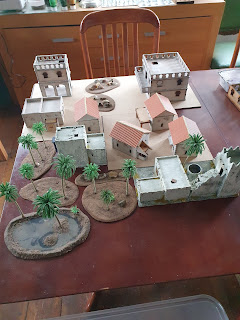 And I have been lining and painting the shed in preparation for future campaigns. 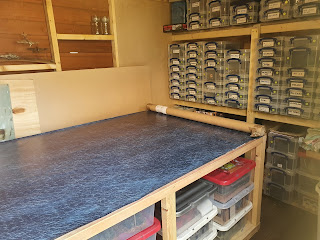 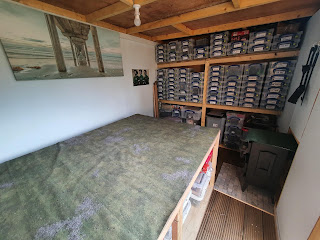 As it is now, still thinking about the roof, but perfectly usable, and I will be grateful of the wood heater when winter comes.

So that's about it for now. Hopefully back to regular posting sometime soon.