In amongst organising the draw, herding cats, answering questions and struggling with illness, I didn't take a lot of pictures. I drew up a quick report on my games, so here they are. Apologies for the DBMM terminology:


Late last year I did a bit of a lead audit, and discovered I had the bulk of the figures (mainly Essex and Mirliton) to make up an 'Eastern European' army. I discarded the idea of a Hungarian army (because everyone has one) - so I decided to paint them up as Wallachians. The appeal of an army led by Vlad Tepes, with Bathory as a sub-general was just too much fun to pass up. Add in Matthias Corvinus (The Crow) as an ally, and it was the Hammer Horror Army. I picked some nice QR figures from their Polish range for Voynuks, and some new Essex EMED to do the Hungarian Ally.

I even managed to get three practice games in, so obviously, I prepared too hard, and over-trained, (I understand this is frowned upon in elite sportsmen..)

On an open table, my mounted would not be very strong against one of the mobile regular mounted armies I expected to face (there were a few of these, Khazar, Mongol Conquest x 2 and Khitan Liao, as well as Teutons). So the plan was to throw down a large and a small hill, a couple of woods, use the hills to hide either the Hungarians or Stephan's command, and deploy basically just Vlad's command, then choose whether to change deployment.

Game 1. vs Tim Montgomery, Hussite.
Tim spent a lot of PIPS avoiding the bombards, and I was able to use the LH to get round the end of his line and snap up a bunch of Knights, inc 2 Generals, the Hungarians tried to take on the Wagons frontally, with singular lack of success, but snapped up a few of the artillery, and Tim's army crumbled. 25-0 to me.

Game 2. vs Greg Russell, Navarrese.
Somehow I never seem to get too much luck vs Greg, the Hungarian was unreliable, and Vlad (as usual) suffered a dearth of PIPS - (especially after I had to keep reserving PIPS to prompt Matthias) The bombards forced him to manouevre his Irr Kn(S) out of the line of fire, and I then attacked them aggressively with LH and Cv from Vlad and Stephan's commands, I turned the end of the Kn command and managed to pick up enough to have him in real trouble..  but I made the big mistake of thinking that with strong winds in his face, I could take on his block of Bw(S) with massed Psiloi..   wrong!..  I lost so many - then PIP drought left the Crusader Kn hanging out to dry, and they were shot down too. By this stage Vlad was disheartened, and the Hungarians, having become reliable were charging up the centre - I think he had a couple of commands, 1/2 ME off being in trouble, but the Hungarian Kn ran into an ambush - he had already shot down two Hungarian LH, and killed one with his Kn, so I couldn't afford to lose any more. With time getting close, two single combats were a 6-1 to him to kill a Hungarian knight, and a 6-1 to me to kill one of his. The Hungarians broke, and the 2 ME transmission took Vlad's disheartened command to broken.
21-4 to Greg, and this game was marked by one particular round of combat where from looking relatively healthy, I managed to roll a whole sequence of ones. I learned a valuable lesson - even large numbers of Psiloi cannot attack Bw(S).
Game 3. vs Anton Verster, Mongol Conquest
I was fortunate to be defender, and placed a lot of terrain, Anton to his credit, was very aggressive, and after a fair bit of jockeying with artillery, in early combats I managed to trap and break his centre - My LH being occupied on the opposite flank to the Psiloi, he then went Psiloi hunting in some woods, which were caught from behind and lost a lot of elements. (I had to wait a long time for the PIPS to turn them around, with Vlad rolling one for PIPS for about 3 turns, and a 2.. while trying to fight with the LH elsewhere). Eventually,  I got a very lucky result with the Psiloi, and managed to kill a LH General, (doubled it at 1-2)  but simultaneously, the Hungarians broke, and the 2 ME transmission broke Vlad. (A pattern?) - Mutual destruction - 13-12 to me.

Lawrence had a lot of cavalry, and three artillery pieces, I defended and again I tried to constrain his deployment, and then force frontally with Bw, Kn and LH. My initial attack on my right was LH and Kn from Vlad's command versus a smaller frontage of Cv(O), the Hungarians on the inner flank. Again, a dearth of PIPS hampered the LH attack, and the 20 Psiloi were forced to just stand aside and watch. The initial charge did nothing, and it took several rounds of combat, in which I lost a few LH before I managed to do damage (should have paid the 'Crusaders' more), and the Hungarians were doing reasonably well, but I took a couple of risks with the Hungarian general to get a couple of 4-2 attacks against Cv(S), which didn't come off, and left him dangerously exposed. Of course the inevitable happened, and again the transmission to Vlad's command broke the army. This one I took too many risks in, and should have been more patient, as well as waiting to develop an attack with the Bow on a line of isolated Ax(O), which would have forced him to at least spend PIPS. I also probably should have changed deployment and forced him to face Bw & Art with his Cavalry, but he had 3 artillery to my two, and I felt I couldn't sustain an artillery duel.  I did some damage - 19 - 6 to Lawrence, who as always, played a very good game.
Game 5. vs Dugald Duncan, Early Japanese

This was one I wasn't looking forward to.. better and more Bw than me, in hindsight, I should have not put down so much terrain. I got lucky in a couple of early bow exchanges, and moved my Art(S) - the first time in 5 games, waited three turns and then blew holes in his line. I used the Hungarians to widen the hole created - but they were very disappointing - several attempts at 5-3 (Kn wedge vs overlapped Bw(O) failed)..  the end of my line in Stephans command wasn't adequately supported, and Vlad's Psiloi lost a few to the Bw then pulled back, the LH stood around, never having enough PIPS to mount an attack. I failed to shoot down any of his Pk(F) as they attacked the Bw, but I managed to hold on. The last bound, yet again the Hungarians failed to clean up the Bw they were facing (at 5-3) - casualties from the archery-fest had broken his two smaller commands, but I had three disheartened commands, and if one broke, the 2 ME would break army, the last two combats of the game I rolled two sixes, to escape with a flank locked Cavalry in the woods at 0-1 and then destroy the Pk(F) with mutually flank locked Bw at 0-2, to break his army. A loss in both would have been game to him, and Dugald was unlucky not to win both. 3 disheartened commands and 20% losses was an 18-7 to me. Again a game marked by a complete dearth of PIPS, so that by the time I manouevred the LH to a flank to attack some isolated Cv, they were disheartened, so rubbish in combat, and I never had the PIPS to do it.


Overall, I was reasonably happy with the army composition, it had enough to make most opponents think. I think I know the major mistakes I made (plenty), but the most frustrating thing was the complete PIP dearth with Vlad's command in 4 games.

Many thanks to the Sponsors, Ray Compton at Essex Miniatures Australia, Miniature World Maker, and Unreal Terrain. With the number of donations, plus our prize bank, every player (except me) took home at least one prize.
Posted by Doug at 01:13 No comments:

I just have to choose whether to add tufts. Not sure. Probably, but will wait for the White glue to dry, use the texter on the base edges and it shouldn't take too long. Very happy with these. 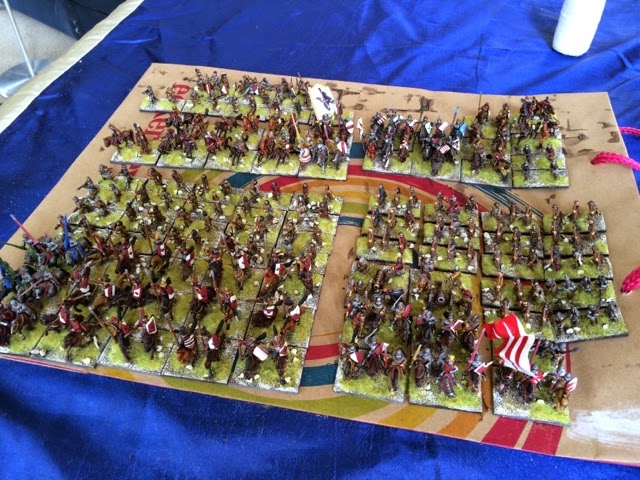 With only five days to go, I managed to get the base coat onto the Wallachians. Dry brushing,  flock and tufts to do. 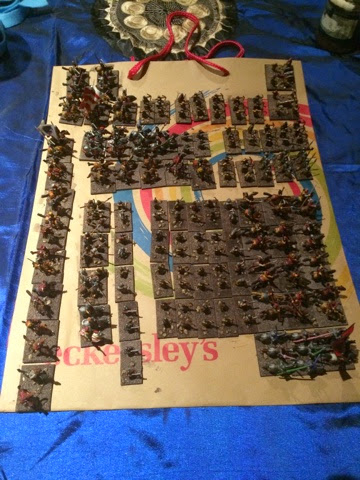 Some time ago, I was looking for medieval naval to use with my DBMM armies.
Pictures on the Ral Partha Europe site of their 'Empire' fleet looked promising and were pretty cheap.
They arrived today and I am delighted with them. Lovely clean casts, well proportioned. They are quite small, the Galleas is about 3cm long, the Galleon about 35mm. Sails are moulded onto separate masts. The cogs are ideal for late medieval while the galleon and Galleas look a bit later. I'm no naval expert, but I would say 16th century. Very happy with these. 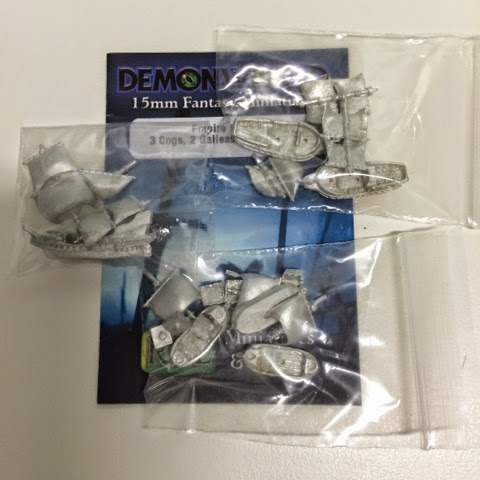 Email ThisBlogThis!Share to TwitterShare to FacebookShare to Pinterest
Labels: Naval

Another Cog in the wheel 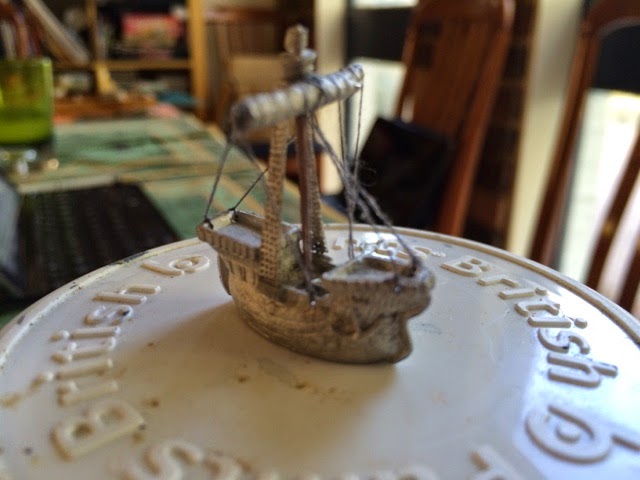 While at Landwaster, I picked up what I think were Dean's last three Outpost Medieval Cogs. So for fun I thought I would assemble and rig them. The only real modification was to replace the mast, drill out the crows nest and deck, then add some 'rigging' and the cast ratlines. For something less than 3 cm long, I reckon it's pretty cute. Time for it to hit the paint shop....
Posted by Doug at 07:38 1 comment:

Feeling suitably virtuous after cleaning out the pantry, this is the workspace. A book on US airborne. Thanks Kym. The antique (well, actually vintage 1978) Matchbox panzer IV, a bucketful of 1/1200 French and Dutch napoleonic ships, and finally the 15mm Hungarians for Cancon 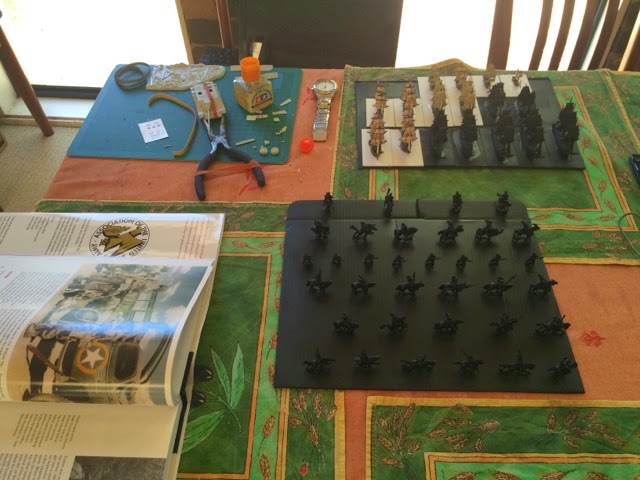 Email ThisBlogThis!Share to TwitterShare to FacebookShare to Pinterest
Labels: 1/1200, 15mm

A Happy New Year - here's to the future

As usual, the New Year is an opportunity to look back and see what I have achieved, and what the plans are for next year...

Looking back on 2014, I made some good progress - not necessarily what I had planned, but still good progress. Completed:

All up - around 350 15mm figures, maybe a hundred 6mm vehicles/figures and the WW2 stuff.

1. American War of Independence in 20mm plastics. Cheap as chips, ordered, and I am awaiting delivery. Rules might be 'Rank & File' or HFG.
2. Actually finish some Chain of Command forces. I have built way too many tanks, now I need to finish off the infantry forces, including EW German, LW German, British, German and US Paratroops, LW British, EW French, LW US, Italians, Japanese, Russians, etc.
3. Another DBMM army..   one of either Late Medieval Scots, Rajputs, Goths, Byzantines, New Kingdom Egyptians, Minoans or one of the other piles of lead..
4. Complete the 1/1200 French Napoleonic Fleet (Rear-Admiral Martin - 1795)
5. Finally complete the 6mm WSS British. Been promising this one for years...

I might leave it at that, I daresay some of the 20+ 1/72 plastic kits might get tackled as well..