So today - in between dealing with painters, carpenters, pool shops, and all the million and one trivia that life imposes, I took advantage of a 30 degree (C) day..

I was collecting the whipper-snipper from the repair shop, went to look for the mixing bottle for 2-stroke, and there in the shed was the 'Tuscan' paint from about 1974...    Being of a curious disposition I of course wondered if it was any good after 40 years..  with an immense tussle I finally overcame the rust and the can..   and with a shake or a hundred.. now - what to use it for?

Of course! - the terrain sheet I worked on several years ago, a simple beige sheet sprayed with 'Brunswick Green' - in a patchy pattern. Tuscan is perfect for dry dusty roads. Some hunting around - and I had a few suitable paint-pots: 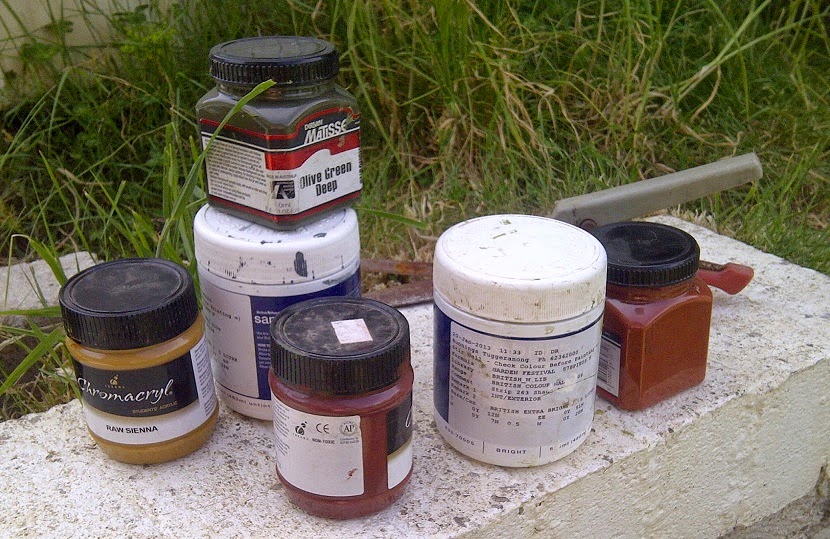 Some mixes from the home store - and some cheap artists acrylics... 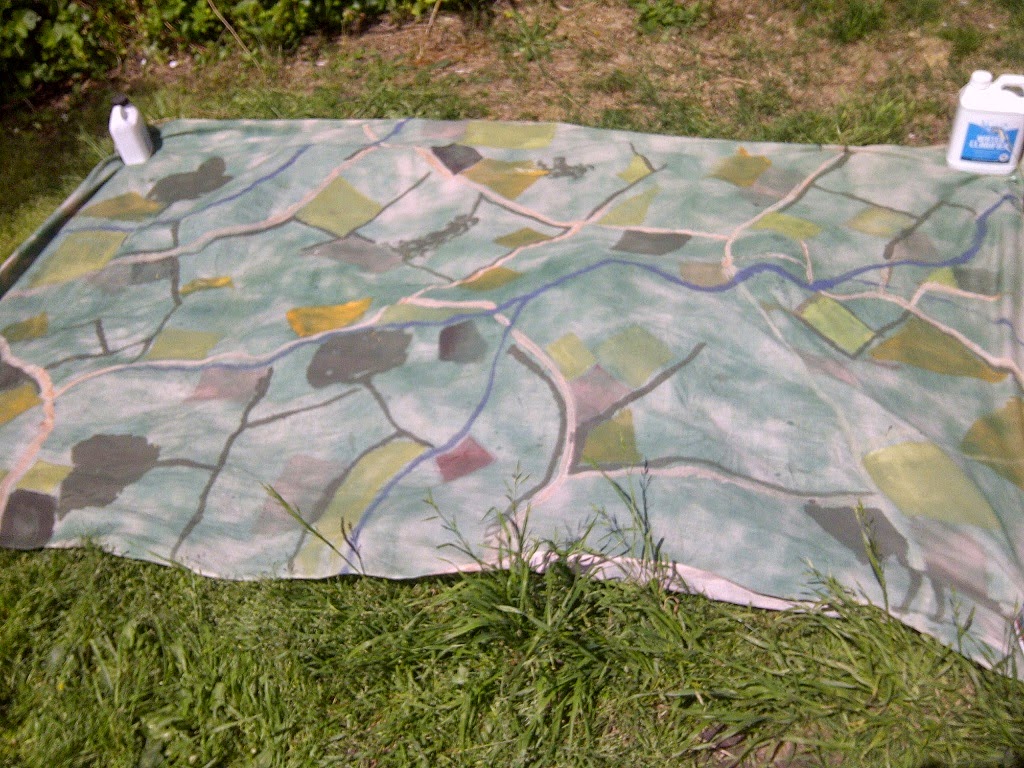 Pegged out on the grass....   waiting for the paint to dry and dull down a bit... very watery so it is just suggestive, and even better, on the other side is much more 'beige' so much better for dull and dusty climates.

I tried to keep the shapes and sizes neutral enough to work for 6mm & 15mm European theatre. I was aiming for something that looked like an aerial photograph...  it sort of works....

And then I decided to do some Pictish/Pre-Feudal Scot flags. I have a very simple technique, just make up patterns, (or 'borrow' them from elsewhere) - print out to the right size, apply white glue and bend around brass rod or similar into a realistic shape, then paint out major colours and patterns - using the printed version as a guide.. In this case I grabbed the Pictish Horse & Z-Symbol rune, added some colour - Bob's your Auntie's Husband. 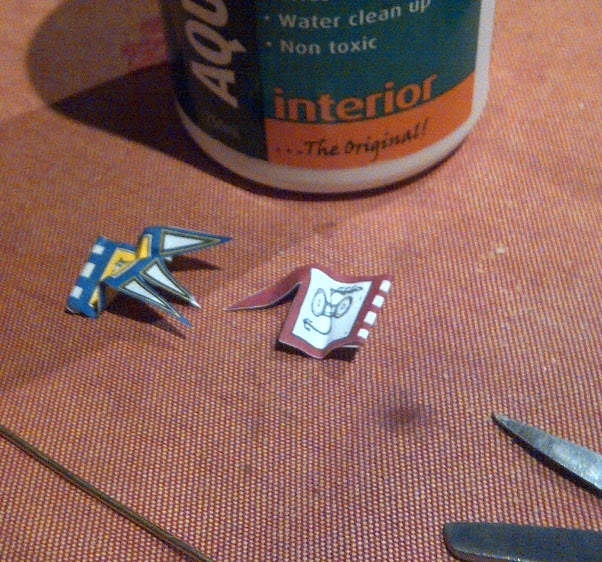 So here they are.. printed, glued, crumpled around a brass road, and just awaiting some paint to look the part.

So from the pain of Matchbox, to the engineering of Dragon.

Firstly - this isn't really suitable for wargaming. There are 95 parts that build up into an exquisite wee model, but there are so many fragile external parts such as number-plates, lights, width indicators and so on, that this would break under any normal wargames handling. The only way it might be useable, would be to drill out all the holes for these parts and replace them with superglued soft steel wire. But some of the shapes are complex and would be difficult to recreate.

This is the first kit I have built that has got me seriously wondering about putting bases under these.

The other thing is that some pieces are 'tiny' I mean really tiny. The side-lamps for example are about 1.5mm in diameter. Watch out for the hungry carpet monster.

So here it is. The Dragon Sdkfz 231 heavy reconnaissance car. Ready for paint once I get my order from the Combat Company. I eventually cracked as I was cranking up the airbrush just for base coats, and an aerosol is much more convenient. 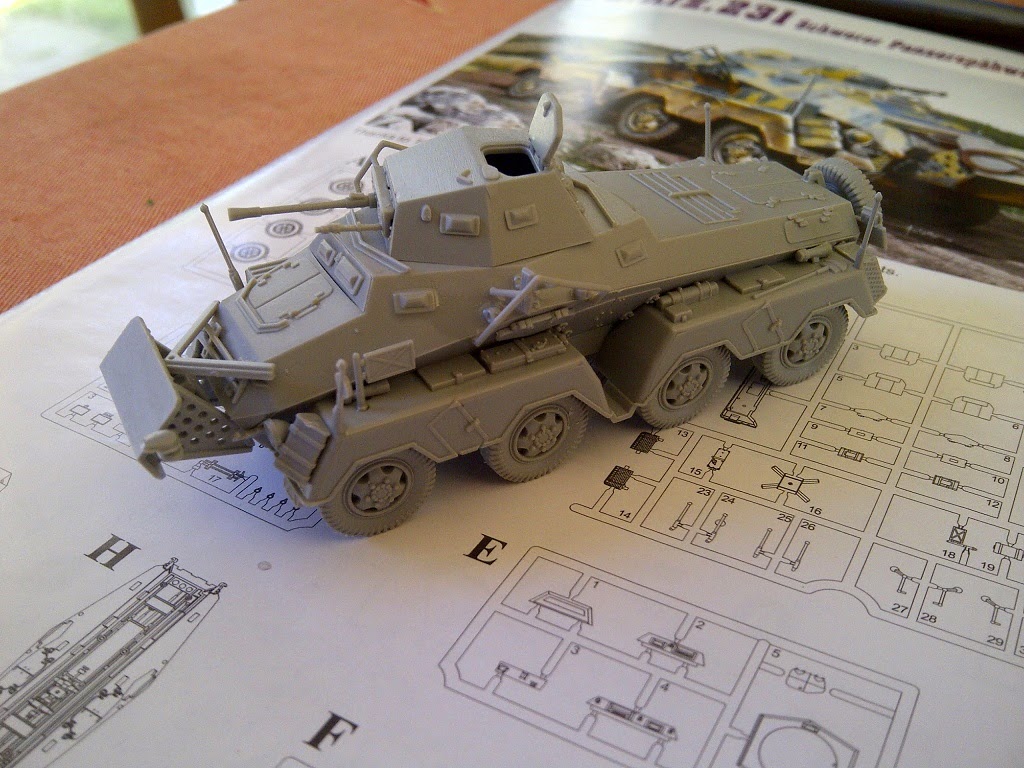 Once it gets a base coat, the overall finish will be very soft thin green stripes, followed by a filter. For some reason Dragon decided on decals that allow you to build your own numberplate - waaaay too fiddly for this black duck, so the number-plates WILL be wrong. I hope the rivet counters don't get too hot under the collar.

The Italeri Sdkfz 234/4 is on the pile in the shed, I might just try a sneak peek in the box and see if it looks like it might be fun..

A Triumph of British Engineering

In exactly the same way that for example, the Austin Allegro was described as a 'Car', or the magnificent electrical systems provided in great British Leyland designs by Lucas the 'Prince of Darkness'...

And what triggered this rant?  Oh.. Matchbox Models. The story so far, I spotted a very cheap Revell M7 Priest + US Paratroopers model kit, for sale, second-hand. Now - Allied Softskins & Support Vehicles such as self-propelled artillery are not common-place in injection moulded plastic kits in 1/72, so I snapped it up.

On investigation - Revell had been a bit naughty. They had bought out the old Matchbox moulds - in this case dating from 1979, which were of course in 1/76 scale (or close enough) - and rebadged them as 1/72.

Ok, so having discovered this, I have been building a heap of kits - mainly Hasegawa, Dragon and the very nice S-Model sets, an ICM (very nice), some Italeri, newer Revell, Pegasus Hobbies and even some Plastic Soldier Company stuff, but I figured I would give the M7 a try. As long as I kept it away from genuine 1/72 Shermans and derivatives, it wouldn't be too noticeable.

The substance of the rant? So the plastic is brittle, and doesn't work well with my favoured Tamiya Limonene Cement, but worse than that; after the taut engineering with superb fit from most of the previous mentioned companies, this thing is like a Friday afternoon build Morris Marina. None of the parts quite fit. The holes in the shell racks aren't large enough to fit the shells provided and need to be drilled out, but you can't drill them out to an adequate size because the rack isn't big enough, the gun barrel looks much too small to fire the shells, everything that is slotted is either too tight, or so sloppy the parts will inevitably become mis-aligned, the trunnion holes for the gun seem to be at different levels so that the gun itself is askew, etc, etc...  Now granted this is a 1979 mould produced in 1997, but this is woefully bad by current standards.

I will soldier on, as I do want a Priest, and hopefully, some care, attention and filler will sort many things, (though not it being 1/76 sadly).
Posted by Doug at 01:01 No comments:

With David Lawrence's 'Landwaster' DBA competition on the horizon, I used it as an encouragement to get some of the lead-pile onto the painting table. These are Splintered Light Miniatures Picts, doing duty as Scots Irish. Ultimately, they will become part of a larger DBMM army.  Very nice figures. In the raw they can look a little crude, but paint up nicely, and have a lot of personality.

I use the 'Baccus Basing System' - essentially white glue, sand with some grit mixed in (actually ornamental gravel used for candle bases, bowls and so on), a dark wash, then drybrushing three successively lighter cream colours. I then added some tufts. These come from Leadbear's Tufts in South Australia, and are really nice. They stick well, and look great. 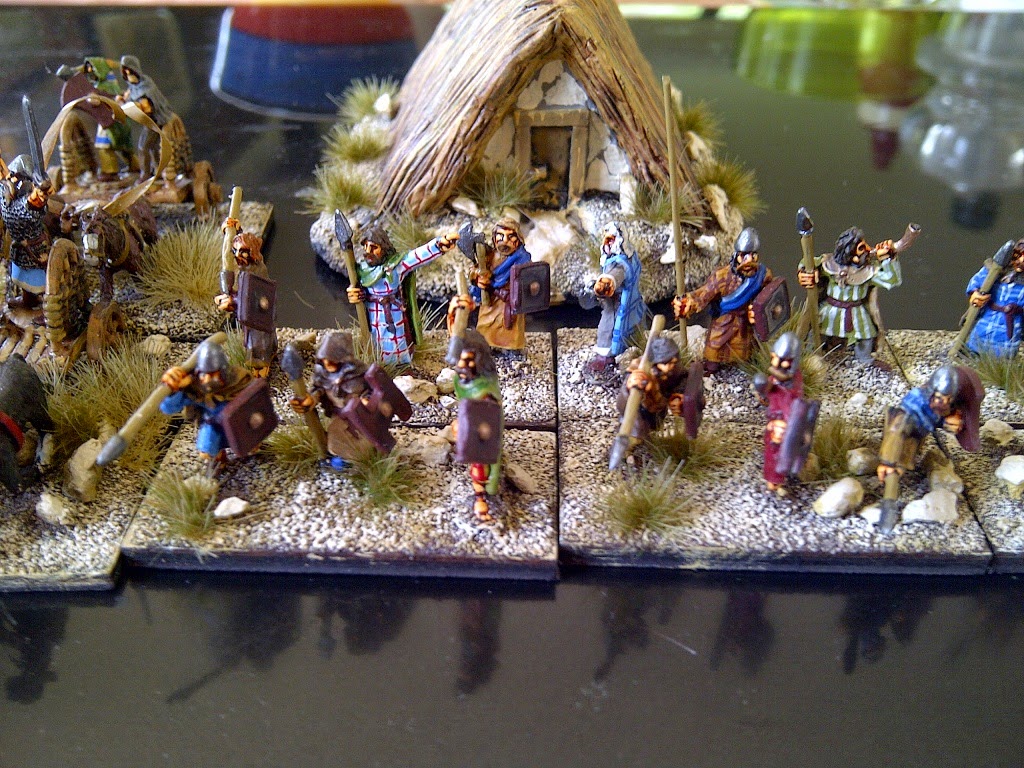 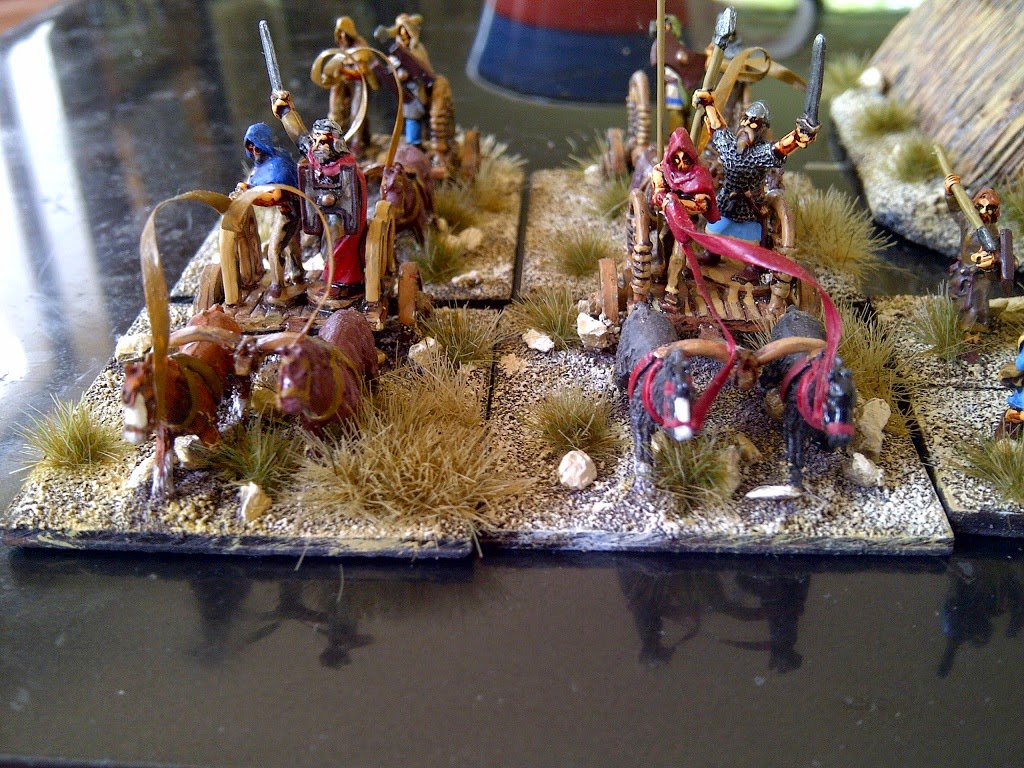 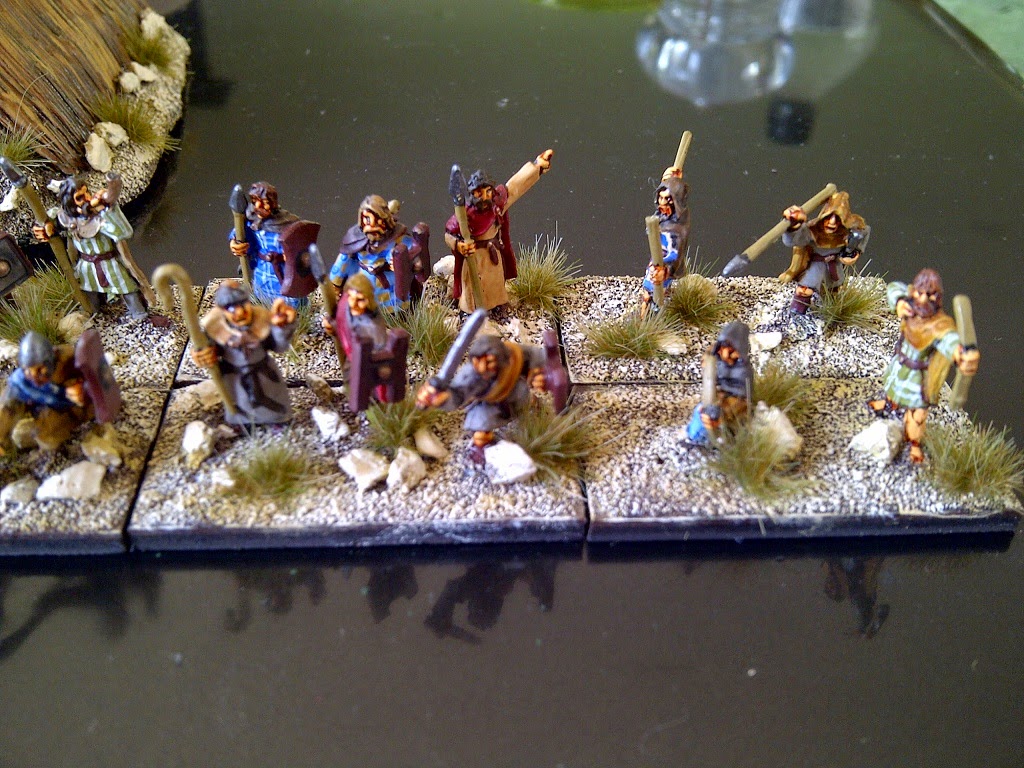 Of course, close up photography has revealed a host of mistakes, and I have just realised I am yet to add a banner.. doh!

Just a quick update of the latest batch of tank kits, these have been rather fun, though still a long way to go. I have been getting more adventurous at replacing cast handles and hooks with wire, especially on those kits that have enough detail to merit it.

All of them have their merits. I particularly like the Vickers and the Su 85 though I wish that S-Model had added the photo-etched brass to do the engine grilles on the Su 85.

The one thing I really liked was the track assembly on the Su. It's really very clever. Each track comes with the inside wheel assemblies plus idler and sprocket moulded together with top and bottom pieces of track extending as far as the front and rear roadwheels, (a little bit of care is needed when detaching from the sprue), you then glue that to the axles - add the outside pieces for wheels, sprocket etc. Separate track pieces are then added to join bottom track to sprockets and idler, and two final curved pieces then fit around the sprocket and idler themselves. It is all beautifully engineered and fits perfectly. Far and away the best compromise I have seen between one piece track with moulding limitations, and the pain of 'link and length'. 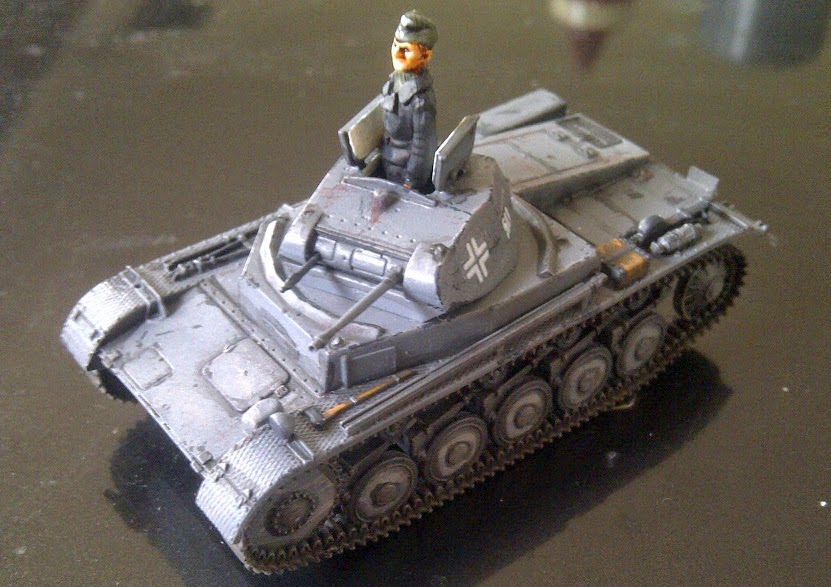 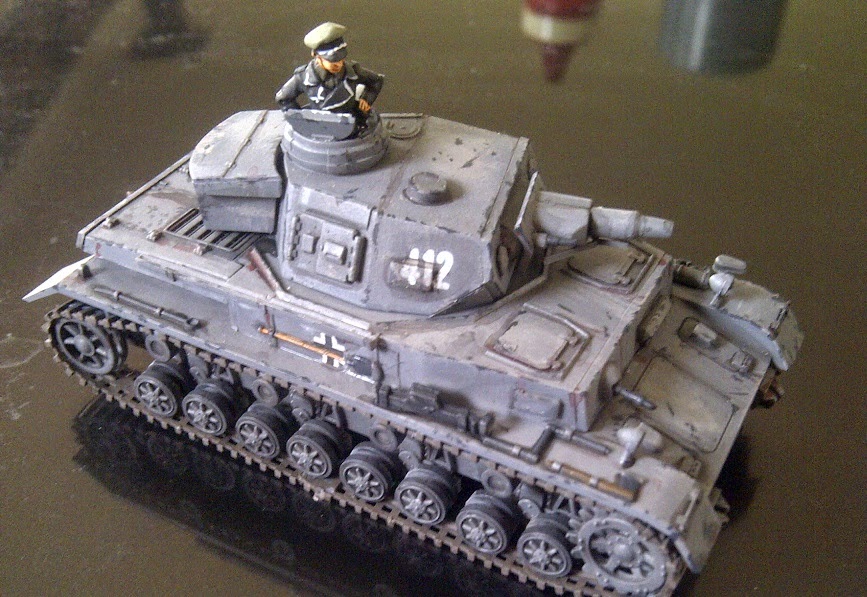