Had a lot of fun tonight with a game of 'Signal Close Action' - Fast Play rules. These are from Langtons, and give a pretty good game with simple mechanics. Essentially, anything other than sailing straight ahead (turning, shooting, increasing sail, fire-fighting, assembling boarders) requires you to make a dice roll with three d6, this is modified by crew quality and current damage.

Each ship has a Broadside Value (between 1-15) and a number for defence capability (DC). Check you are in arc and range, make the ability roll, and you knock off a number, either from Hull or Rigging which is a multiple of your Broadside Number, and potentially multiplied again if a 'rake'.

As an example, a 120 Gun ship might have a Broadside of 13, at close range x 12, and a typical '74' might have a DC of 120. Each single close range broadside would be 156 points of damage, and each DC lost reduces the ability and the broadside value of the 74.

We decided to take a 74 and a frigate each. In my case (French) - I ran the Incroyable, a 36 gun frigate with an average crew, and the Indomptable, a medium sized 74 with a Poor crew.

John ran the Pallas, a 32 gun frigate with a Good crew, and the Swiftsure, a smallish 74 with an average crew. 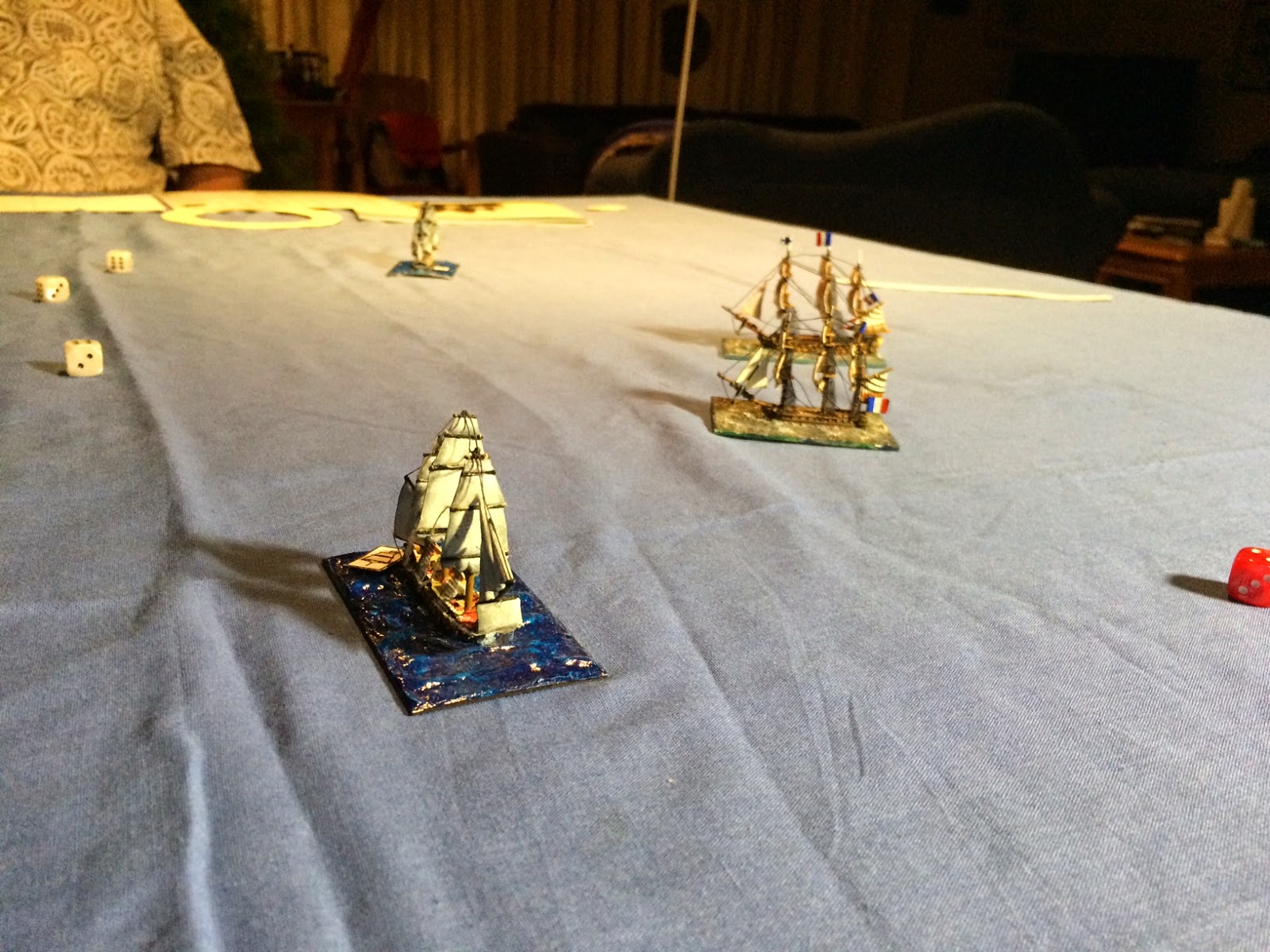 Early in the game, the French (on the right) try to cross the T of the British ships.. this works but incredibly poor shooting and a misfire results in a hull fire aboard the Incroyable, which was also taking serious damage from the Swiftsure. 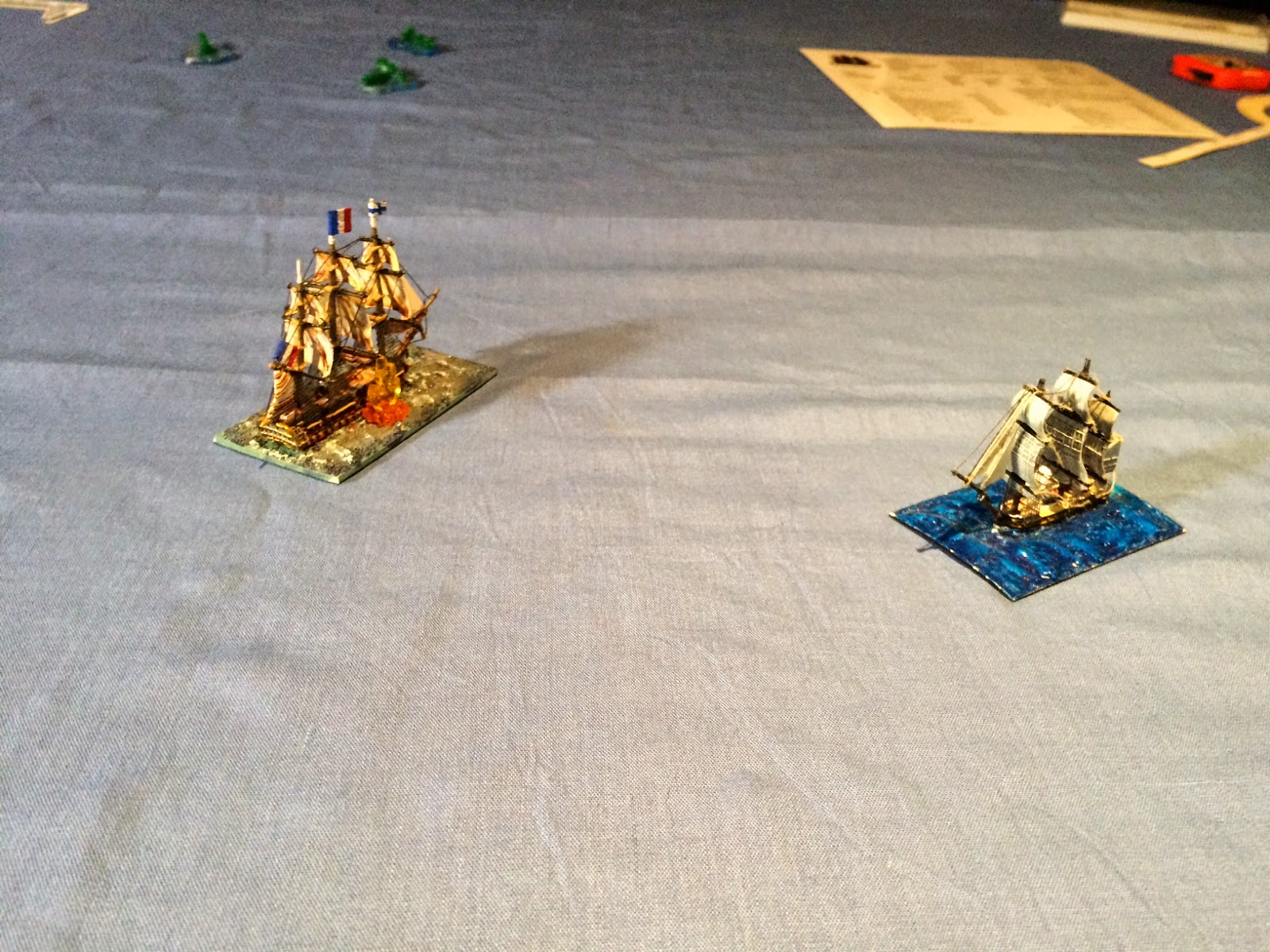 On fire following another misfire, the Indomptable tries to blow the Pallas out of the water and misses. 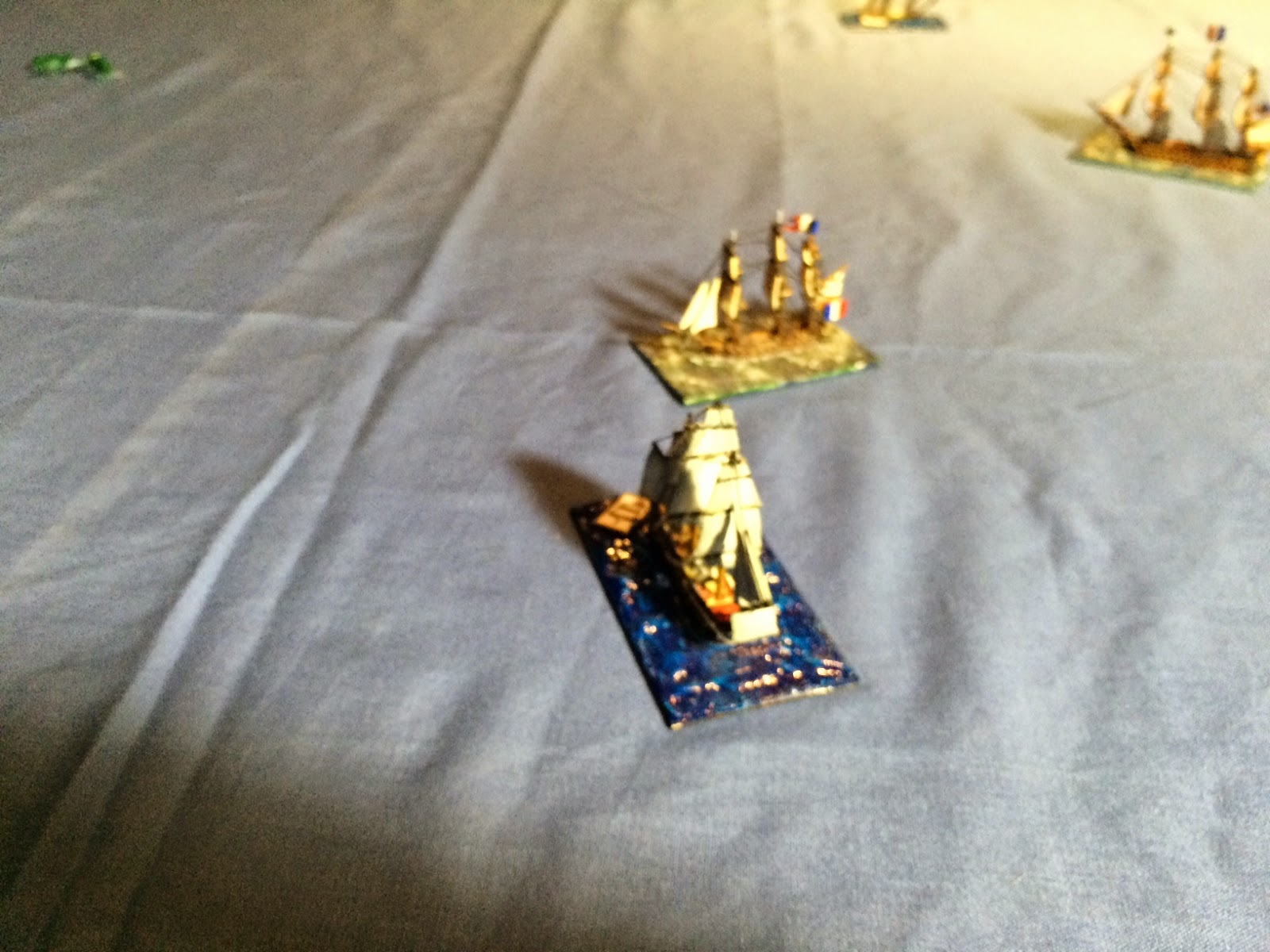 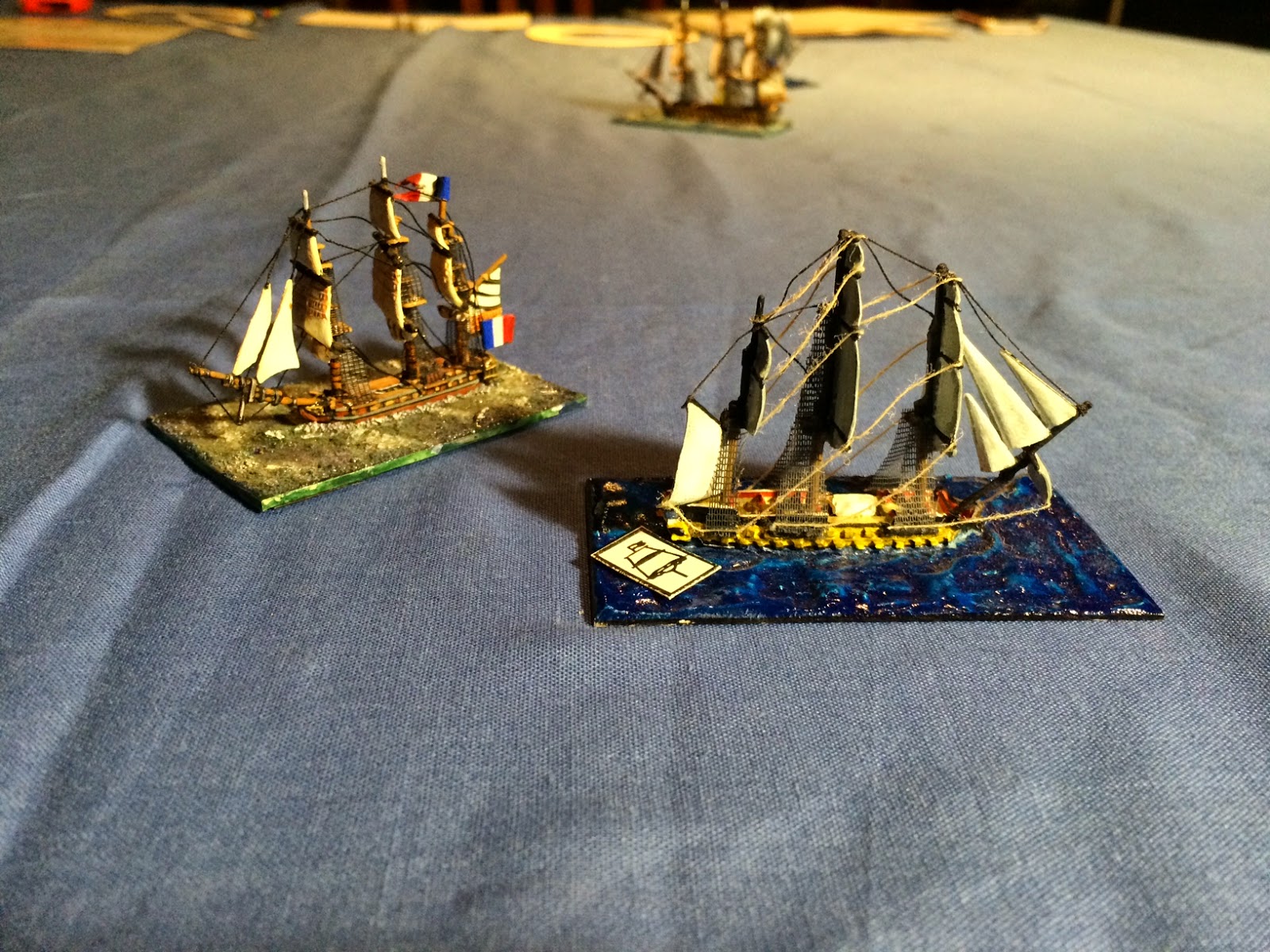 The Incroyable tries for a stern rake on the Swiftsure, and fails - leading to another fire - The Swiftsure tacks and unleashes a broadside that heavily damages the much smaller French frigate.

With that much damage - and with its crew fire fighting, the Incroyable strikes it's colours and is taken prize by the Pallas. 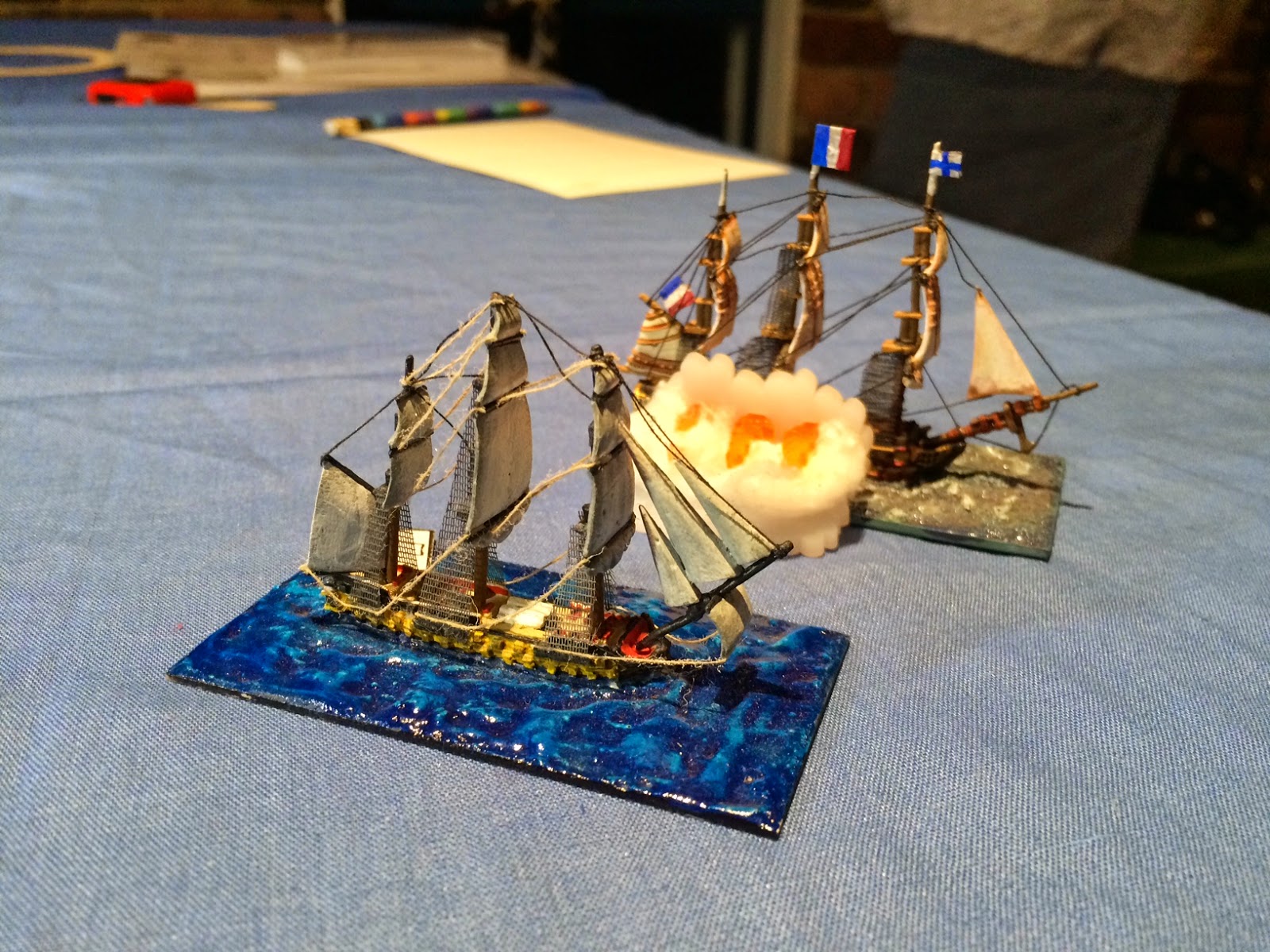 The Swiftsure and the Indomptable trade broadsides. While the French ship has a slightly heavier broadside, the crew quality should even things out. Surely the untrained Sans-Culottes canot be a match for Jolly Jack Tars of the RN?

But they are... after losing three 'DC' the Swiftsure's broadside is no longer doing the same damage, and somehow the French have managed to keep firing..   eventually, it becomes too much and the Swiftsure strikes its colours.

A really fun game, the British capture a relatively lightly damaged 36 gun frigate - a vessel they desperately need, while the French captain must be reluctant to try and tow the heavily battered Swiftsure..  it will more than likely go down with the prize crew while under tow.
Posted by Doug at 12:52 3 comments: