Last of the Danes

Not Hamlet, but the additional bits and pieces I wanted to add to the Danish Cold War battlegroup.

I again went back to QRF, and added some dismounted TOW, some mortars, some 'Blowpipe' missiles, which double as 'Hamlet', the Danish version of 'Redeye', additional Landrovers and Unimogs for transport, plus the very charming Walker Bulldog M41 for reconnaissance.

So here are the reinforcements. I still have air assets in the form of a Tornado, a Phantom and a F16 to finish, but it seems like overegging the pudding.

The QRF Lynx is a much later model, so I had a lot of hacking to do around the exhaust nozzles. Not an easy job.

As always, a very simple paint job. My new airbrush got a work out, (yes, I cracked - ordered a new one on the Friday I broke the old one, it arrived on Saturday, thanks to Amazon Prime).

Green for vehicles is sprayed XF51 Tamiya Olive Drab over the black undercoat, and the 'Grey' is Vallejo German Grey. Infantry uniforms are sprayed Vallejo Russian Uniform - webbing is Vallejo Grey Green. I used Vallejo Military Green for some equipment (Mortars and 'Hamlet' launchers). Washes are by GW, 'brown' & 'black' (Nuln Oil and Agrax Earthshade... or whatever they are called these days)

And right.. that's it. No more to add. Seriously, I am calling this Battlegroup done.
Posted by Doug at 19:09 3 comments:

Not a Good Day

So some time back, I picked up the Tamiya 1/100 model of the Il-28 Beagle. I love the look of this plane, and I had a vague idea I might pick up some of the PSC T55 and build up a Polish battlegroup as an opponent for my Danes.

So having assembled it... minus the 'glass', I put it aside, and this morning thought I would give it an undercoat of gray primer...

Now whether it was the humidity, or something else..  it went on like sandpaper..  gritty and horrible..

Not much I could do about it at the time..  so I had to leave it. So when I did get back to it, rubbing it down did nothing, so the last resort was to scrub with white spirit.

And this was the result..

Ok, so having got it back (almost) to bare plastic, I undercoated using black. Much better. And then I had a moment of insanity, and thought I would airbrush it silver..  with Vallejo Acrylics..  I knew it was a dumb idea, but frankly, the whole model was a disaster, how bad could it be?

Utter disaster.. the Beagle looks like it has been painted by Jackson Pollock, and of course I clogged the airbrush, several times, then trying to unscrew the brish to clean it, sheared off the front stem through which the needle passes, rendering the whole thing unusable, and I believe - unrepairable.

As I mentioned in the last post, I ordered some more Danes from QRF, and hey presto! They arrived yesterday. Great service from QRF.
Files, scalpel and glue at the ready, I've transplanted the MG from the Walker Bulldogs to make Recce Landrovers, added crew and stowage as necessary. Today will be the messy bit with stocking mesh, white glue and tea-leaves. 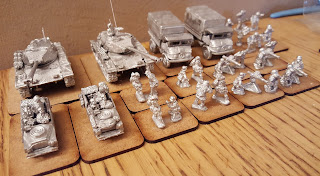 Generally speaking, the QRF models are easy to assemble and make good representations of the vehicles, while the infantry paint up quickly and look pretty good, but the Unimog is a real pain to assemble.

Now all I am wondering is whether to add anything further to the battlegroup. It's very tempting to grab a few more landrovers as transports for the SAM teams, and the dismounted TOW. Plus another couple of APC and some more infantry would give me basically a mechanised battalion plus supports. Hmmmm...

Very happy with these, both how they have eventually turned out, and secondly, with how fast they have been to paint up.

The force is designed to be a small Danish All-Arms battlegroup that could be expected to operate defensively in Denmark itself.

The M109 are Zvezda 1/100 plastic models, the Harrier is by Revell, and featured in a previous post, and the rest are all from Geoff at QRF.

When I say these are finished, I succumbed to temptation and put through a follow up order with Geoff for some mortars, Unimogs as tows, more Landrovers, and reconnaissance in the form of M41 Walker Bulldogs..   utterly useless on a wargames table, but pretty.


Rather fun to put together, I am hoping the nephew will finish up his East Germans for Team Yankee and we can get forces onto a table.

I also still have acccess to the Cold War Commander  battlegroups online tool, so I ran up 2000 points for each, and I am pretty confident I can play 90% without the rules (which are in storage). So if TY doesn't work* there's a fallback. And Plan C is to take inspiration from Chain of Command and write my own.

*Well - actually, I am pretty confident they aren't much chop, but I will give them a fair go.
Posted by Doug at 01:18 8 comments:

And here's the view of the Danes with the first colours blocked in...

I'm very pleased with how they are starting to look. Not too bad for a simple black undercoat, airbrushed green, and some highlights applied to the black.

Next step, tracks, green highlights, first base colours, then I am going to do a 'khaki' dust using the airbrush, flock etc, and see what else needs doing. 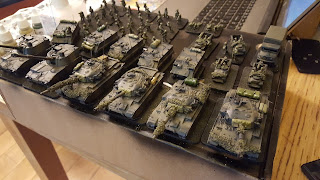 I am well pleased with how fast these are coming together.
Posted by Doug at 23:19 3 comments:

Amazing what you can do with sprue, greenstuff, laminate, an old pair of stockings, brush bristles and some tea.... 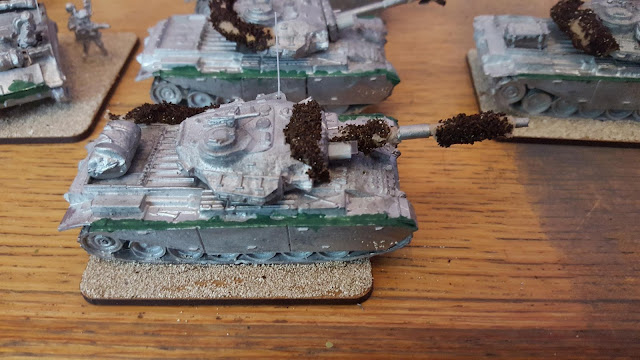