So over three weeks of lockdown. For me it's not much of a difference. The only thing I miss is the monthly club meeting. But following blogs and forums keeps me amused, and engaged with the hobby.

There are some very cool things, like Osprey Publishing's free eBooks...  thanks Osprey. Essentially, each week they add 5 free eBooks to a list you can download for free.

Somehow I haven't found much time for reading though. I have my partner, dogs, a garden, and the former has a list of home improvements a mile long. So I've stripped varnish off the staircase, an ongoing and horrible job, still incomplete, transplanted 8 rosebushes, stripped back and varnished a table, cleared out the shed, cleared out the boiler room/cupboard, moved rubble, demolished a cubby house etc. etc.

So in amongst all this, what of wargames?  I have three main projects on the go at the moment. Vikings in 15mm, for DBMM, as they fit into the Warfare 2020 Theme, scheduled for Ascot in November. (Assuming we aren't still in lockdown!) These have been progressing slowly in small batches, and I am in no real hurry. I just usually have 6-8 elements worth beside me on the painting table. Sometimes I knock over the batch in two evenings, but the latest batch has been there for a few days with not much appreciable progress.

The second project is 28mm Jacobites and Hanoverians, for Sharp Practice 2, (Currently hugely discounted!) using the 1745 article in the 2017 Too Fat Lardies Summer Special.

I bought into the Flags of War Kickstarter in two batches, which arrived much to my delight, as they are truly lovely figures. So far though, I have just been prepping the figures and bases. I made a final order of some Hanoverian dragoons, just before Iain shut down the Flags of War sales, but they haven't arrived yet, so I have been deferring actual painting.

Once the dragoons arrive and are prepped, I won't have any further excuse, but I am wondering how to base my mounted. I have some 60 x 30mm pill bases in the base stash, but these are too big for regular troopers, so I am now going to have to hunt down some smaller pill bases and sabots, with the problem that my usual supplier 'Warbases' is closed for the duration. I would rather stick with one supplier, but that might not be an option, so I shall see what Charlie Foxtrot or Supreme Littleness have, assuming they are still operating.

The final project is my ongoing Chain of Command forces and terrain. I have a weakness, as do many wargamers, for focusing on pretty figures and not spending enough time on the table. So one of my resolutions was to spend more hobby time on terrain.

So what have I been doing? Well.. I needed some more dirt roads, and a railway track: 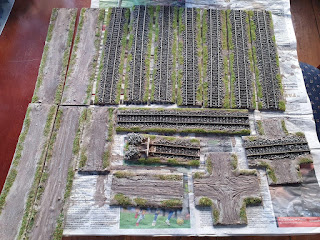 I added in a level crossing.. not sure whether there should be fencing or warnings/barriers, so I left those off. And a set of buffers so the line can end neatly. I have some rail offcuts to add to this too. 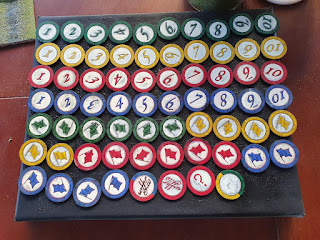 And I was rummaging in the shed, (as you do) and realised that while I had painted up command markers (flags) for yellow and green for my 'Le Cedres' Sharp Practice AWI scenario, I hadn't painted the numbered chits, and that the original blue and red chits had seen some bleeding of colour and needed touching up. So now I have a decent set of markers painted and sealed in four colours.

So that's it. Hopefully will see those dragoons, sometime soon, and kick off the 1745 painting, in the meantime, there's some Vikings needing attention.

Stay safe and well out there.

So yesterday, I was prepping some of the Warbases 1p sabot bases I use for Sharp Practice. In this case, this involved applying white glue to the top of the base, and then covering in sand to get a texture. (Later I will add cat-litter rocks etc..)

Having applied sand, I leave them to dry a little, then go back and scrape inside the recesses with a sharp knife to remove the inevitable overspill. It's time consuming and messy.

Here's an example of the sand finish, these aren't the sabot bases, but markers I did for wounded leaders. Sabot bases from Supreme Littleness, skulls were in my accessories box.

So as I looked at the finished result after a couple of hours.. it occurred to me I could get virtual identical results if I could buy a 'top' for the base, cut from medium Sandpaper to the same spec as the base, and just stick that on.

So I can't believe no-one has suggested this? If Martin (Warbases) is watching...  personally, I think it's genius, and a real timesaver.
Posted by Doug at 07:45 2 comments: