So these Navwar ships are very easy to paint. This was one days work. Tack to cardboard using thinned PVA. Attach the ship descriptions from the packs (otherwise I am sure to confuse Type 22 Block 2 with Block 3), undercoat spray gray. Wash with GW Badab Black, then wet-brush a very pale gray, and pick out details with white, black and a pale Indian red for decks. (Yes I know - probably not accurate..)  I will go back and redo the hulls to make them more even. 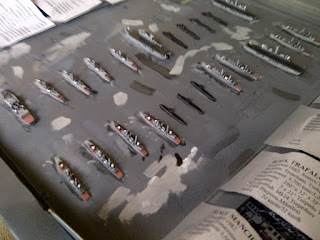 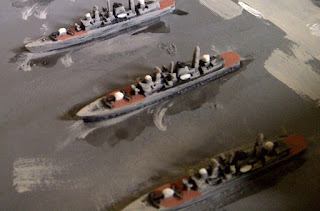 So pretty much from spray one morning, to this stage the next day. Basing and preparing labels actually takes much longer.  I reckon I may get out the jig-saw and have a go at some craft wood - as the last basing material wasn't ideal (spray varnish ate into the base sides).

Now I just need to re-read the rules and once that's done, put down a couple of ships and try out a solo game.
Posted by Doug at 15:47 2 comments:

Still waiting for some aircraft to arrive, but here they are in all their glory. 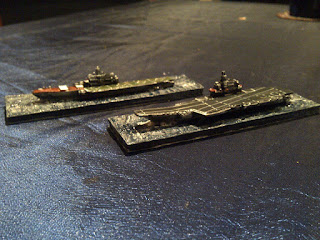 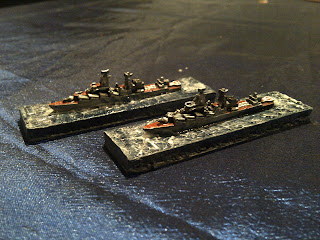 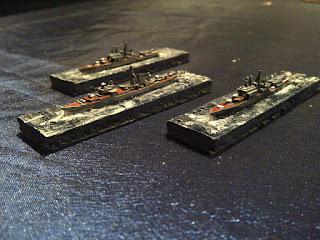 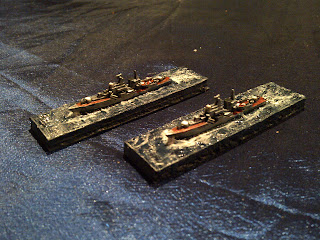 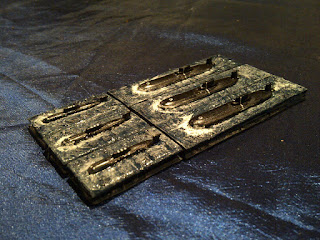 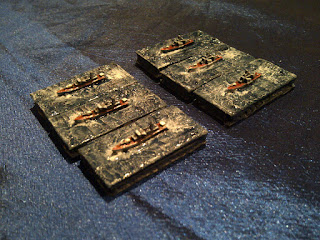 The Red Banner Fleet gets Wet

Or at least the basing progresses to the point where I actually quite like the look of these guys.

I had washed the plain bases with GW Blue Ink, and then slapped a load of acrylic gel on, using an old brush and schlepping some wave patterns in. 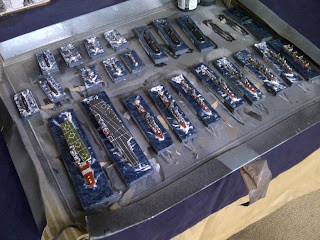 The gel is white when wet - and dries glossy clear, but while wet, gives you a really good idea of how the finished drybrush will look. 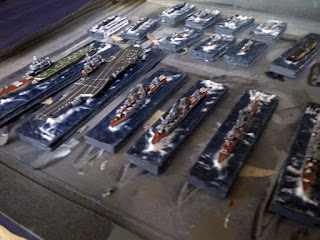 Of course, there has to be a bow-wave when you are charging towards the Imperialistic Capitalist Running Dogs at 30 Knots!
Posted by Doug at 08:49 1 comment:

Having now played a few games of DBMM2 with the Desert Rajputs, I am gradually coming round to the realisation that they are in fact..   rubbish. A poor excuse for my own generalship you may think, but actually it is just the reliance on only a few elements that can actually fight - and the PIP coordination is abominable. Not to mention that Camels are seriously underpowered in this ruleset (probably correctly I should add, the ship of the desert is more like a landing craft, best used to just get the PBI into the right spot.

So, as Wintercon, with it's Mysterious East theme is only three weeks away, I decided to get out the Sui I painted up for Cancon, fiddle with the list (of course!) and get them on the table. This variant included artillery, less double based bow, and a Central Asian Turkish ally.

I played Jon's Later Muslim Indian. Joy of joys I was the defender, and had to suffer a night attack. Luckily for me, Jon had several bad PIP dice rolls, and by the time dawn came, he wasn't in position to mount a crushing offensive.

Fun game. Lots of mounted, and I realised just how fragile the Sui are. Even though almost everything worked for me, I basically would have scored very poorly, as my own losses mounted up. The only bright spot was the 'Hail Mary' charge uphill with my cataphracts vs his Cavalry which saw me shatter that command thanks to the Kn rolling up on every combat. 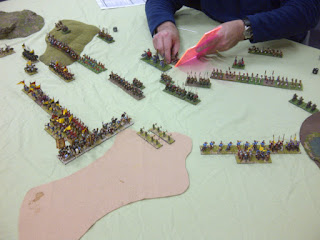 Jon advances while I try to bring my allied mounted up past a patch of bad going - my Moho light horse and superior cavalry on my right are trying to be a pincer. 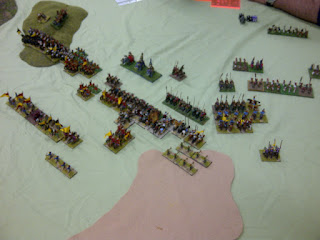 It's getting very ugly, a big melee of LH, Cavalry, and on the far left, the Cataphracts charge in.. 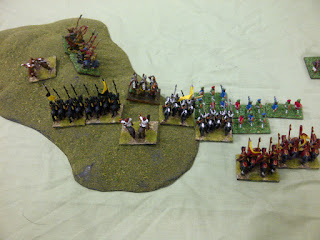 Fortunately, knocking over enough of the opposing cavalry to shatter that comand. The Blades though managed to fend off all comers, and despite having to flee, lost not a single casualty.

Back to the drawing board for me... I wonder if they would be better as Early Tang?
Posted by Doug at 08:45 1 comment:

Ok, so I decided I was going with some decently thick bases.. two principal reasons..

1. It would make handling the base easier, rather than damaging the models.

2. It would give me a good way to add labels to the models.

Thomo had sent me a sample of the material he was using for his basing, but I couldn't locate any, so I thought I would go for the old foam/card sandwich material. It has one drawback, which is that unless you cut it with a very sharp knife, it will 'tear' along the internal polystyrene. 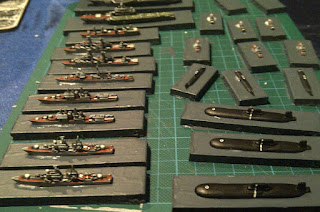 Next step is to add labels, then matt lacquer these. Following that, a wash of green ink on the bases to add depth, paint on the acrylic compound scrunch for waves, and drybrush white... 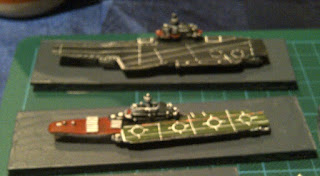