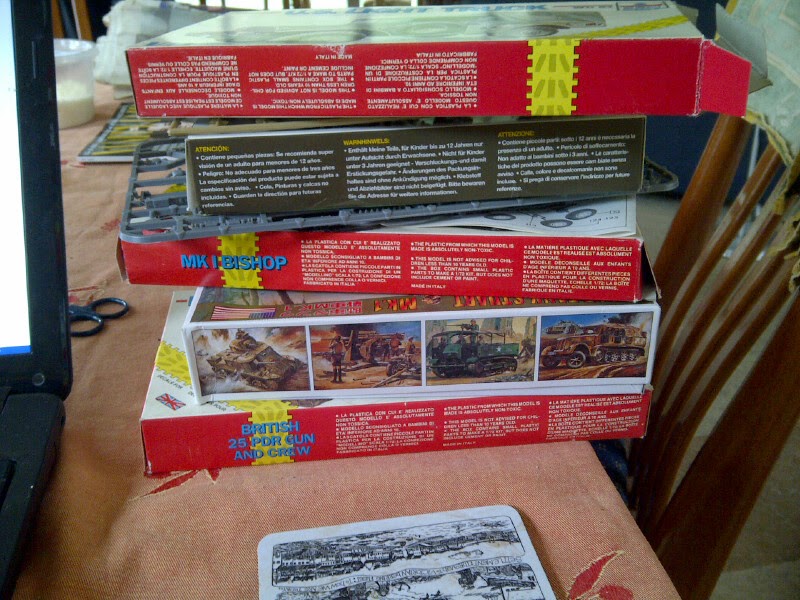 Some time ago I picked up enough Tin Soldier Hellenistic figures to build a DBMM army, enough for 48 elements of Pike, some Spearmen, Auxilia and a whole bunch of mounted suitable either for the Macedonian elite Companions, or Thessalian cavalry.

I have heard some people be very critical of Tin Soldier, but I actually really like them, loads of character.

Dave is running another of his Canberra DBA Competitions in a week or two, so I thought I might throw together a DBA sized Macedonian army. It fits all my criteria, uses existing figures, might act as an initial trigger to actually finishing the whole DBMM army, and isn't so powerful that it could be seen as a killer army.

I am still waiting to pick up some bases from Olympian Games, but the painting is done. So here they are:

I pulled out some remaining plastic kits last night, and started slapping them together. The M5 & Universal Carrier are PSC, Dingo by S&S, M4A2 by Armourfast.

The balance of my British/Allied armour is in Green and best suited to Normandy and after. So I decided to paint these up in a way that would let me claim them for late Western Desert, Sicily and Italy. Not quite accurate, but not quite inaccurate either.

I rather like this lot. Base colour is 'Iraqi Sand' then washed with GW Devlan Mud. The Sherman crewman is cobbled together from butchered figures in the PSC M5 & Carrier sets. No Decals as yet, so all the markings are hand-painted.

Well, looking at the lead stocks, I managed to dispose of about 1.5 Kg in a shoebox on Saturday.

Maybe two years ago, I purchased a box of TYW (Thirty Years War) lead by Testudo.  So far it has sat on the shelf. The Testudo figures are very nice, about 17-18mm and very detailed as well as including plenty of variety (in part by having multi-piece castings). For example, I counted at least 6 variants for Scots Musketeer, 2 marching poses (both two pieces) two firing, and two reloading. Apparently Khurusan now have the moulds, but to date, there is no detail on when/if they will be re-released.

Out of the box ($200 originally IIRC) there has come an army for Thomo, Scots Covenanters for me, and I have now passed on at least enough lead for two more armies. Seems like a good deal.

There are a few bits and pieces I need to do to call some projects finished, but they seem to have a life of their own. Partially finished -
So just thinking what next - but in the meantime, I still have uncompleted 20mm models such as another PSC Stug III, Pz III, Daimler A/C, 2 x Universal Carriers, and another Sherman...

So they might be best used for the late Desert campaign...  except then I would need to source some 8th Army and some DAK infantry. You can see where that is going...     use the stuff I have, which then means I need to get more stuff to round it off..    this way, madness lies.
Posted by Doug at 11:35 1 comment: 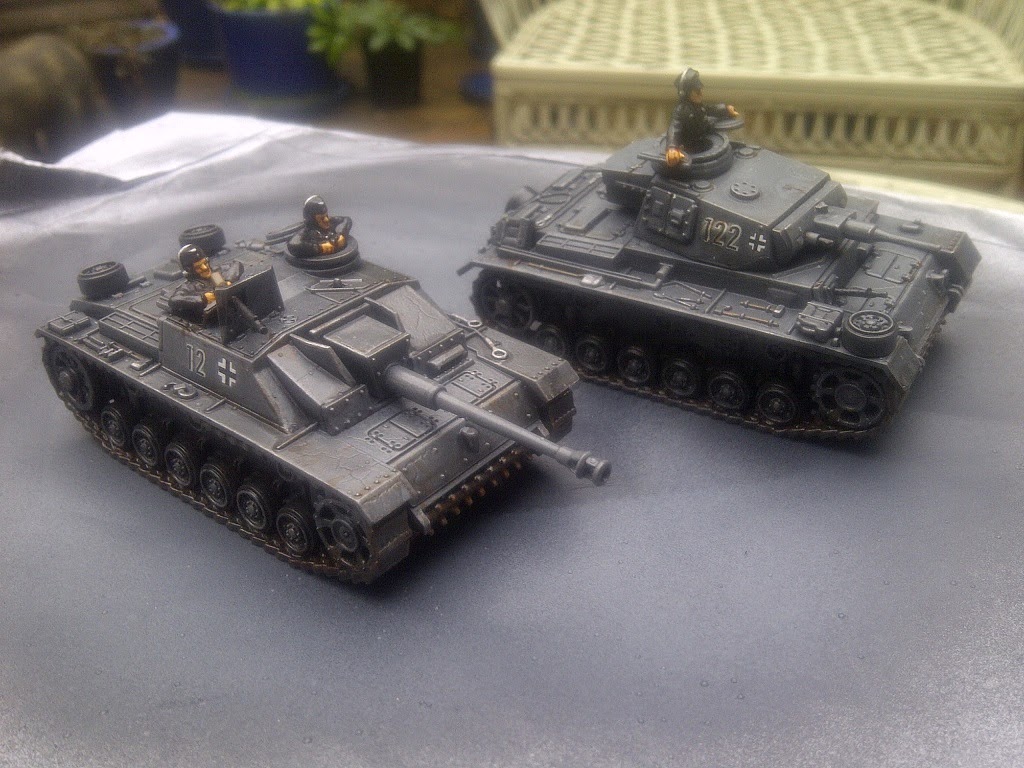 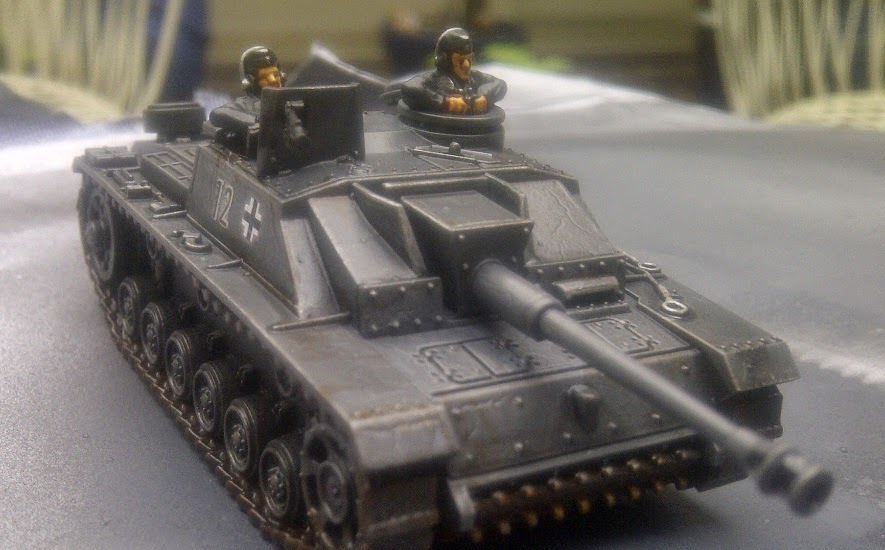 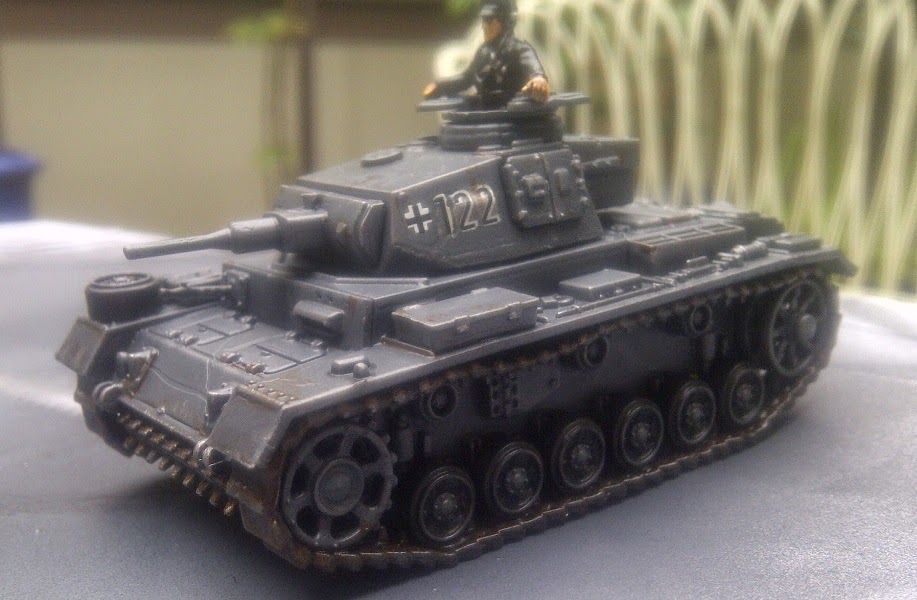 Now that I see the close up of them, the decals look a bit wonky in the pics. I shall have to go back and fix them up.
And blast you movies...  Apocalypse Now is on at the moment, it's Robert Duvall and the Ride of the Valkyries, and I remember I have a GHQ battle box of 6mm Hueys tucked away in the lead pile.  Except then I would have to do my 6mm NVA...  hmm..  Cold War Commander is appealing.
Posted by Doug at 07:36 1 comment:

So, I have tried to swap my 1/72 spares from PSC - and got no interest locally. So I decided that as well as having 1944-45 stuff, I should have some 1942 German Invasion of the Soviet Union stuff. Ok, so I just figured that painting stuff grey was easy.

So I threw together a PzIII G and a Stug III G (early) - from the PSC kits.  Then realised how hard it was to make grey look interesting and real.

So far: - black undercoat..    overspray grey - not so heavy it was dense. Then - dry-brush neutral grey, pick out tools, and wash with thinned GW Badab Black.

So here they are works in progress: 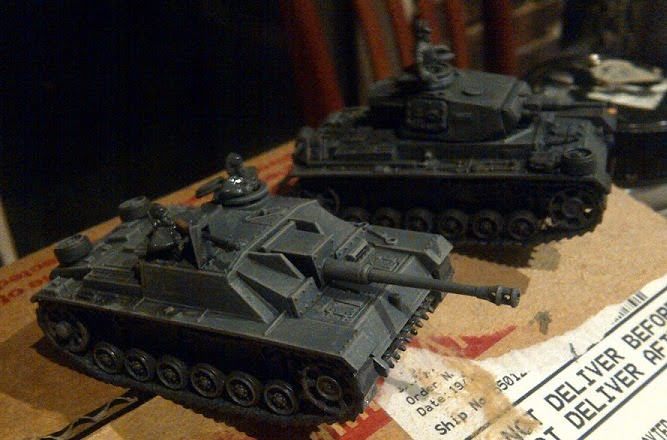 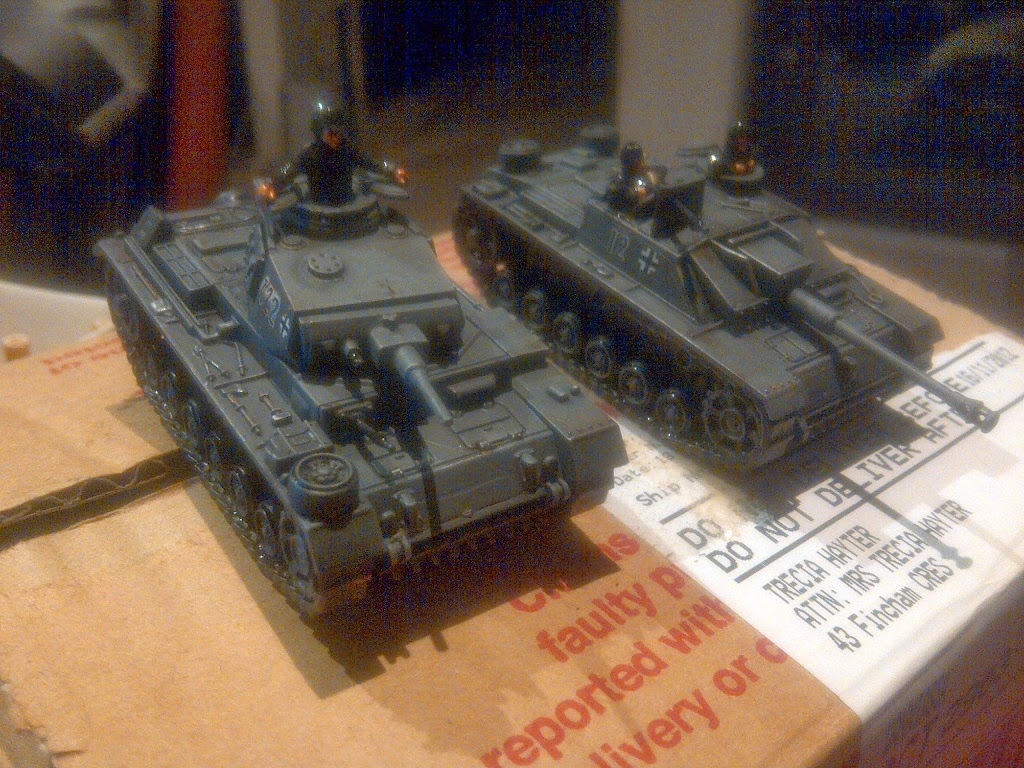