It seemed appropriate on St Andrew's Day to finish off two test pieces for my Jacobite forces. These are perhaps more of a colour palette test. Though I am going to have to replace my Armypainter 'hard leather' colour, as the entire bottle split open when I tried to open it. I also managed to have the Vallejo Military Green come out an entirely different colour when I used it for highlights on the Lowlander's breeches.

Otherwise, I am happy. They can join the solitary Hanoverian infantryman that so far constitutes my entire painted 1745 force.

And Flags of War who produce these figures have a current Kickstarter for further figures including Bagot's Hussars and artillery pieces and crews. If you sign up to the Kickstarter you can get the already produced packs at the reduced Kickstarter prices, so it's a really good deal, and an opportunity to add soem lovely figures to your forces.

So here they are, Hamish and Rab. I'll finish off the basing in one go once the rest are painted. 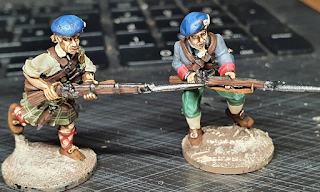 And as I am starting to get into painting these, keep an eye on Stiu's blog for updates on how his Government forces are progressing.

Some Barricades - clearing the workbench

Over time, besides major projects I have succumbed to occasional temptation, such as carts and small resin scenery items, these tend to get assembled (if required), undercoated, and then they are just a little too dull or low priority, and so they hang around for ever.

Time to clear a little space, so I slapped paint on some barricades and a broken down cart from Alternative Armies.

These will do nicely for barricades for pretty much 1630 - 1950. And the cart from 1630- 1900 I guess. I wanted the barricades primarily for civilian defences in WW2, but I suspect they will see use in AWI, and possibly even the Jacobite period. The castings are nice, as I usually expect to have to fill at least a few holes in resin casts, but these ones I decided it wasn't necessary.

Not hugely exciting, but another space cleared in the lead(resin) pile. I really must start putting new pieces into a scenic context, not just snapping away on the very tatty old cutting mat. 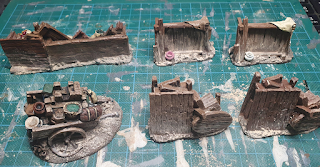 Why I hate scales - Compare the Pair

Used to drive me mad learning them on the Recorder, back in prehistory. No, sorry. Anyway. I recently bought the Rubicon Comet kit. The Comet is a very late war (1945) British cruiser tank, the ultimate development of the concept before the 'Main Battle Tank' Centurion. I have always liked how they looked since building the 1/76 Matchbox Comet kit back in ohhh..  sometime in the mid 70's I guess.

Up until now, the only Comet models available have been in resin, and I have resisted purchasing them for two main reasons.

Firstly; I find resin hard to work with, the dust from drilling and filing is hazardous, and there are often mould imperfection. Secondly, having a Comet, I would then be inevitably drawn to purchasing Empress Miniatures very nice Later War British Infantry in smocks and tabards... which would inevitably lead to Empress Miniatures Later War German Volksgrenadiers, and then I would need late war terrain with snow and ice, and well, a slippery slope.

But - my birthday coming up, Rubicon releasing their Comet kit, and I thought I might really go to town on it. Comet duly purchased. Gorgeous kit, goes together very nicely. Rubicon even provide a crew figure. But there's the problem.

Ok, so admittedly, one of them has no knees.. but just look at the difference in the head sizes, and the hands. Impossible. Either I have to source another figure or make sure the Comet and its commander are kept well away from other figures.

And I have to stay away from the Empress Miniatures site. Because I already have 1st Corps figures painted up for 1944 British. And if \I was to buy any more WW2 infantry, it should really be the new 1st Corps BEF figures, except...  all their accompanying vehicles are in 1/48...

It must be so easy for all those wargamers who didn't move between continents and bought up all those 1/50 diecast Corgi tanks when they were still available and not at the stupid money prices you see on eBay. £90 for a Comet? Ridiculous. Anyway.. here's mine so far:

Still not sure what to do about more stowage, grab handles on the turret have been replaced, and everything is dry-fitted to make painting easier, so the front and rear track side pieces have to be added, tow cable, more stowage, netting/branches etc. The white stuff is modelling putty to add texture to cast armour and do the weld seams.  The rear telephone cables, latches on the storage bins and so on are also to be added. Not sure about aerials. The images I have seen don't seem to show obvious aerials in wartime pictures.

The one thing I wish I had was a brass aftermarket 'birdcage' to make up for the commanders sights. I thought about making one, but it might be well beyond my model making skills. The alternative is to put a 'cover' over the solid plastic one, but I have never seen one in photographs.