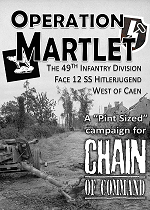 Martin and I have played several one off games of Chain of Command, but we finally took the plunge and elected to start a campaign, using the Too Fat Lardies Operation Martlet 'Pint-Sized Campaign'. These little campaign books, together with the 'At the Sharp End' campaign rules, offer a lot of enjoyment

(For examples of CoC campaigns, I couldn't do better than recommend 'The Tactical Painter' and his campaign AAR, or Tiny Hordes.)

So Martin set up the terrain (with one exception*) - and I brought figures and vehicles. Neither of us was particularly desperate to play either side so Martin rolled a dice and even result = British.

Martlet is set very soon after D-Day with British forces attempting to push through West of Caen. And the game provided a very interesting example of the rules playing out. 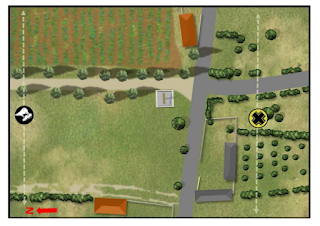 The scenario is a probe, with the British forces on the left attempting to get through the lines and exit the German base edge.
The British, as in every game in the campaign, get a pre-game bombardment, this has the effect of making it a 50/50 whether German units can deploy onto table in each phase... On this table, they had 13 points of support.  The Germans may reinforce one of the sturdy French farm buildings into a 'bunker', and have 6 points of support. With their support - the British take a Sherman, an additional squad and a 2" mortar. The Germans take a second senior leader, and a tripod mounted MG42.
So to the game. Morale was 8 for the Germans and 10 for the British.
The patrol phase was uneventful, the German jump-off point furthest West was in the building selected as a bunker. 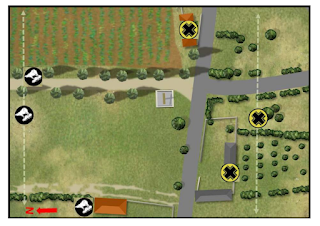 As expected, the general lack of cover on the British (Northern) end of the table meant their markers were quite well back. 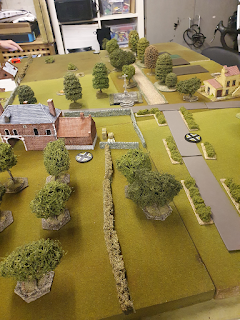 The view from the German end. The large red building has been reinforced as a bunker, and the British have the initiative, starting with a roll of 4,3,3,1,1. 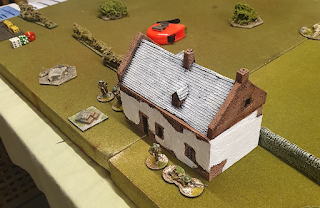 Two squads are immediately deployed in the only real cover on the Western edge. In the building are members of the original platoon. behind it are an extra squad drafted in from another platoon as supports. 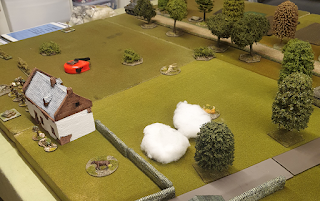 Did I mention the extra 2" mortar, oh yes, it was going to be a game where I could see myself running out of smoke markers. The German phase saw them attempt to deploy their Panzer IVH and fail due to the pre-game bombardment.
The British brought on a Sherman on the road, placing it on Overwatch, while the borrowed squad started to come round the side of the building towards the German positions. Despite being ordered to run, they managed a paltry 6" leaving them in the open. 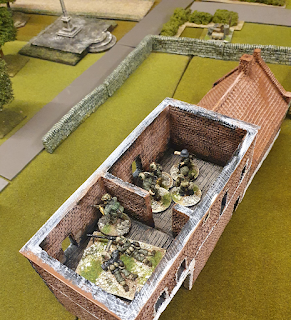 With one British squad now in the open, the German roll was a fortuitous 6,6,5,5,2 a double phase  - I deployed my first squad successfully, and opened up with the two MG42... Hitting on 5-6. 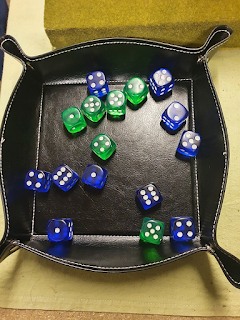 Not bad...  and casualties 4 dead, Junior Leader wounded, and 1 shock. The Bad Things Happen roll was a 2, and so no impact on British Force morale. The second round of firing (using only 4 dice as we were playing that each additional phase cost one d6.) 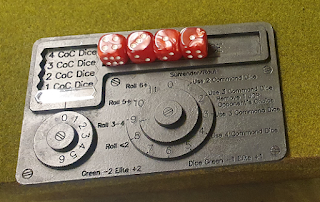 One of the rather nifty Warbases control dashboards. Very neat. And that 3 meant I could bring on my Panzer IV to take a shot at the Sherman - 9 attack dice hitting on 5-6... 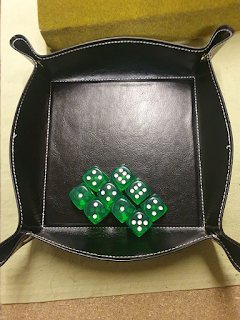 Not even average... with a net zero hits, the Sherman shrugs it off, and on Overwatch, hits with a roll of 8, makes 2 hits. I roll 2 saves, but on net zero hits, a roll of  is 1 shock and reverse 3 inches, which would take the PzIV halfway off the table..feverish rules consultation, several opinions found, and we decided to play the period and not the rules, as the road didn't simply cease to exist immediately behind the Panzer. An extra point of shock seemed sufficient, and the two settled down into a duel that should have been firmly to the advantage of the Germans, (similar armour rating, the German long 75 far superior to the M4 75mm), but dragged out for the rest of the game without a decisive result.
And now I got in my second round of fire against the infantry in the open. Another 2 dead and a point of shock. It all felt pretty comfortable for the MG42s. 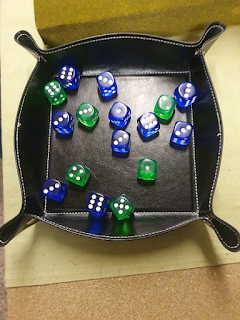 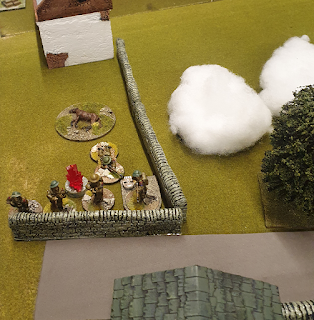 Those unlucky supports.. taking a beating.. 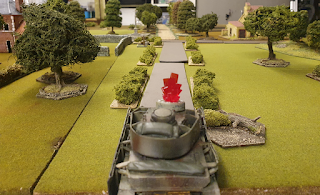 The tank duel continues. And the British push up another squad under the cover of the smoke. I desperately wanted to deploy a second squad, but couldn't get through the barrage. I did bring on one of my senior leaders, to add his initiatives to the squad mg gunners and ensure they could fire on a command die roll of 4. But nothing else made it. 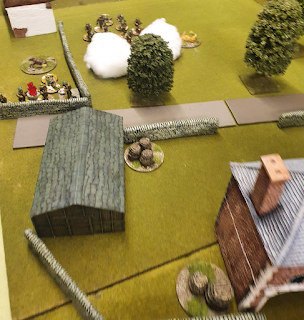 More fire rained on the now pinned men of the additional squad..  their JL took another wound, again, no effect on Force Morale.. 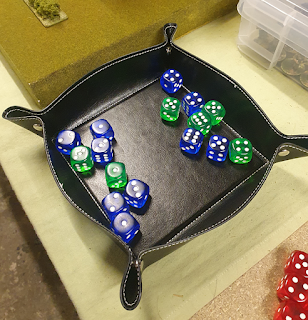 And now, the British command roll was 6,6,2,1,2 - the tank duel continued, but more importantly, the British squad ran 14" through mortar smoke into the lee of the farm building on the left of the bunker, out of the line of fire, and with the second roll of 3,3,1,5 another 11" accelerated them past the buildings, out of the line of fire, running pell mell for the table edge.. and Victory...
I moved an MG42 team to put half fire on them, no effect, tried to deploy an additional squad to intercept, no joy! My final attempt was to bring on the tripod mounted MG42 behind the bunker, hoping to apply enough shock to slow them down, failed as well. 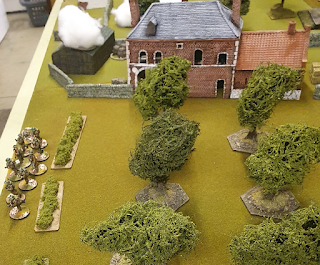 As Martin picked up his dice to roll, a 1, a 2, a 3 would all see him run, with just 9 inches between him and the table edge. I joked that he needed 2 x 5s and 3 x 4s....    and he responded by rolling 5,5,5,5,4...  he couldn't run!
But these 4 x 5 were enough to get him to a full Chain of Command dice, and so no matter what I did, he could interrupt to activate his squad and make the final sprint. Chariots of Fire music echoed subconsciously as his three dice totalled 10, with just 9" between him and the table edge....

Probably one of the most unusual games I have ever played. Martin seized his chances, I couldn't deploy thanks to the bombardment, (or get a chain of command dice to end the turn, the bombardment and the smoke). I lost no casualties, Martin lost none of his core platoon and it's a Victory to the British in Game 1. (I reckon the Germans count a losing draw as they inflicted more casualties in losing.)
I was left with a couple of questions...  about the tank reversing partly off-table...   what counts as getting a team off table,  and why is 2" mortar smoke more impenetrable than high stone walls.... ah well - off to game 2 at my place in two weeks time.
*and that terrain piece? I 3d printed the roadside cross, made up the base from MDF, painted and flocked it last night. This morning I picked t up to spray varnish it, and inadvertently sprayed it matt black....   doh!