Following on from Game 1 in Operation Martlet, we checked for post game results and as we hadn't known which side we were playing in advance, rolled up the characteristics of the Leaders.

Platoon Leader: Lt. Oliver Pimpleton a young  strapping six footer 19 year old who attended Mid Manor public school in the Midlands, although quite young he is very intelligent and charismatic. He is well aware to rely on his nco’s and take on board their advice when needed. Hopes to go to university after the war.

Platoon Sergeant: Sergeant Tom Donaldson,  a 27 year old steel factory worker from Motherwell Scotland, recently back from hospital after a bout of TB, he’s still recovering and although tall is very thin due to this.  Has been in the war since 1939 and is a very experienced NCO.

Section 1: Corporal Dean Quinn, a  26 year old an average guy who was an office clerk from Wales, a bit of a know it all and not entirely happy that he didn’t get promoted to Sergeant. He would rather be back behind his desk, than here, but who wouldn’t?

Section 2: Corporal Peter Tanning a 25 year old from just outside Birmingham in the Midlands, an average bloke who was happy to join up to see the world and get away from the farm and labouring. Hopes to make a career of the army.

Section 3: Corporal Andrew Cairnie, the oldest NCO in the platoon at 44 years old from the Midlands, but originally from Scotland. Ran away from home at an early age, eventually joined the circus and travelled the world.  A giant of a man and still athletic for his age,  hopes to emigrate to America after the war, where he spent a lot of time. Although very experienced, he’s seen too many people die needlessly to stick his neck out unless its absolutely necessary!

Zug Leader:  Oberscharfuhrer Lars Pedersen – a Doctor of Engineering, Lars is tall and thin, a little older than virtually all his men, at 28. From Koblenz, he was originally drafted in to engineering for the Panzer Regt – but was transferred to the footsloggers when they realised he was a chemical rather than a mechanical engineer.

Gruppe Eins: Scharfuhrer Max Dietrich, Age 21, from Berlin, his father was a factory worker and a Communist while Karl became an enthusiastic HJ member. He’s of average build, and otherwise unremarkable.

Gruppe Zwei: Scharfuhrer Rolf Rechtsmann, Age 22, also from Berlin, his father was an industrial worker and Rolf (of course) another enthusiastic HJ member. He’s tall and thin, and somewhat grim for his years.

Gruppe Drei: Scharfuhrer Manfred Groll, Age 26, originally from Bremen, Manfred is ex SA and formed an early cadre for the regiment due to his party loyalty and enthusiasm. He matured early and is a big man, a model citizen who has a fondness for drinking songs, and seems much older than the youngsters in his squad.

Panzer Kommand: Scharfuhrer Jurgen Dieff, Age 22 a Schwabian farm boy, who was driving tractors as soon as they were introduced on the estate where his family had been tenants for generations. He's a model citizen of the Neue Deutschland.

Given that the Panzer G is a core part of the Zug, I thought that the least I could do is paint up a decent model for Jurgen. I have a resin Panzer IV G ('ish) that was free, but it never really grabbed me.

I also had a Rubicon Wirbelwind kit, and there are sufficient sprues in the kit to build a Panzer IV G ('ish) plus the Wirbelwind turret, so that's what I did.

[Edit - and I have just realised I put the two front hatches in upside down.. stupid careless mistake in a hurried build.  Live with it or damage the model taking them out?  I think the former for the moment, although I now can't un-see it.. ]

I looked at contemporary photographs of 12 SS Panzer Division tanks and they had an unusual numbering system, three digits beginning with high numbers and the numbers appeared to be very roughly hand painted, while the camouflage was relatively simple three colour late war. Balkankreuz were inconsistent. 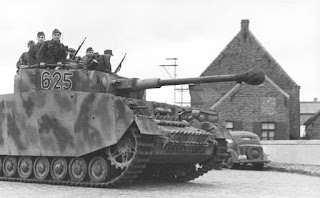 I also spotted at least two tanks in this series in photographs where the drivers visor and commanders cupola appear to sport the names of girlfriends. So we know that Jurgen's sweetheart is called Dora. 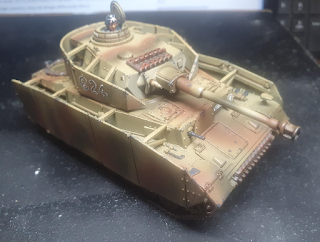 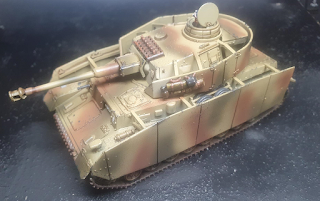 Apologies for the picture quality - Samsung released an 'upgrade' to the very high quality camera in the Galaxy S10, and it seems to flatten out the colours and details..  all very well for imperfections in skin, but rubbish for weathered AFV.

While I had the airbrush out, I printed off another SdKfz 250/1 for 'The Punch from Wunsche' a campaign counterattack which needs two Panzer V Panthers, and two SdKfz 250/1.

Oh, and I have (optimistic) plans to paint kill rings on as required...

For the British – the Victory means the CO’s opinion improves +1 to 1, the men’s opinion was affected by losses, so is now -2. Lieutenant Pimpleton; who was originally relaxed, is now cheerful.

For the Germans – the Losing Draw has left the CO’s opinion unchanged at 0. The men are delighted to have suffered no casualties while inflicting a few, and are at +2, the loss however has affected Lars, who is no longer relaxed, and he is 'thoughtful'.

So far, none of these will affect Support Points or Force Morale in the campaign, but Lars is hoping to score a win next time out.

Email ThisBlogThis!Share to TwitterShare to FacebookShare to Pinterest
Labels: At the Sharp End, Chain of Command, Operation Martlet