Japanese for Chain of Command

Quite some time ago, I was inspired to start collecting figures to play something World War II, a little bit different from the fairly standard fare of NW Europe. Back in 2018, The Tactical Painter was running a series of After Action reports on a campaign from Too Fat Lardies 2015 Christmas Special - covering the Malaya Campaign 1942 that ultimately resulted in Singapore being captured. I coincidentally picked up a Kindle copy of the 'The War Against Japan, the Loss of Singapore, Volume I' by S Woodburn Kirby. 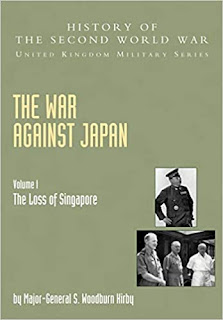 Reading through even the official account, it was a litany of poor decision making, underestimation of the opponent, inadequate forces, poor organisation and lack of training, and of Japanese planning, leadership and flexibility. On the Empire side, with few exceptions, the leadership from Whitehall to battalion level was diabolical. Empire troops were thrown into line unsupported, ill-equipped, with virtually no training (some of the recently raised Indian battalions had almost never fired a rifle).

Leadership paralysis in Singapore saw a resort to the tactics of poor management since time immemorial, reorganisation. Battalions seemed to fall under half a dozen different command structures during the brief campaign. reassignment and poor communication saw troops being pulled out of prepared positions leaving neighbouring flanks hanging. Overall, it was a pretty object lesson in what not to do.

The few high spots for the Empire troops were the courage of individual battalions and officers, in particular some Indian units, an Australian formation and the 2nd Battalion Argyll & Sutherland Highlanders. (In an interesting aside, when the surviving Argylls reformed in Singapore, they were combined with Royal Naval Marines and nicknamed the 'Plymouth Argyll' after the well known football team.)

A regular army battalion, the Colonel of the 2nd A&S was considered a bit odd by his fellow British officers for his insistence on jungle training his men. Conventional wisdom was that it was impossible to fight or move in force in the jungle and no opponent could conceivably mount a jungle campaign. Whether that was the difference or not, the Highlanders seem to have been used as a fire brigade in the latter stages of the campaign, and were the last battalion to withdraw over the Causeway into Singapore, pipes playing.

Part of the appeal of this period is also the necessarily primitive equipment, so that materiel considered obsolete was often reassigned to Malaya and other secondary theatres. (One can only imagine the dismay of RAF and RAAF pilots, outnumbered and facing Zeros in Buffaloes and Beauforts.) So the 2nd A&S managed to acquire 5 obsolete Lanchester armoured cars, and possibly some Marmon Herringtons. Facing them the Japanese forces would make considerable use of their Ha-Go light tanks, relying on the lack of Anti-Tank capabilities to charge through roadblocks, and attack Empire formations with virtual invulnerability.

So having done some serious terrain modelling - 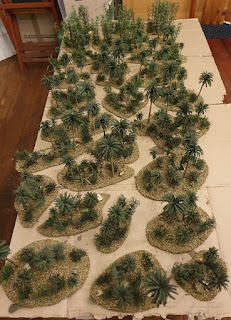 I had a jungle, a couple of jungle huts, roads etc could be repurposed,  and at a pinch I even had railway track that would serve. I had a start made on the 2A&S, so it was time to work on their opponents. An anonymous Japanese army platoon, organised into 3 squads of 12 men and a corporal, a knee mortar squad of three mortar teams under a corporal, and the senior leaders, a sergeant and a lieutenant.

The core infantry plus an anti-tank team came from the Warlord Games Plastic Japanese. Supports came from 'The Assault Group' in the form of snipers, flamethrowers and a fixed mount Medium Machine Gun, Chi-Ha or Type 97 tanks from Warlord Games, (one resin, one plastic) and two Ha-Go Light Tanks, resin prints from 'Paint & Glue'.

So firstly, when I had a look at the plastic infantry on the sprue, I found them a little underwhelming. The poses looked a little 'overactive', and I also felt that there was a degree of stereotyping with some of the heads having prominent 'buck teeth' while there were also quite a few sprues with spectacles. (Ironically, replicating the views of many British Officers in Singapore who were very dismissive about their opponents!) 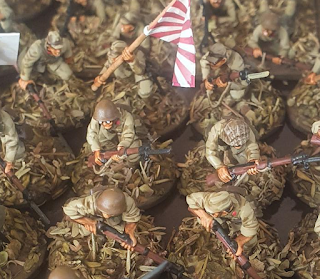 Once assembled though, and taking some care with the selection of arms and equipment, I think they build up into some very active and attractive figures. There is a nice mix of heads, some with bare helmets, some with mesh, and some in the cap. I was a bit disappointed that none came with the tropical flaps that attached to the cap, but those would be easy enough to add if you wanted to. 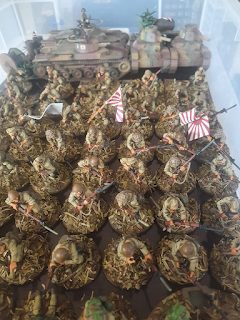 I had to fiddle a bit to get the numbers and poses sorted out, and rather than purchase an additional sprue to get more riflemen, I used some artistic license and used the 'flag' arms to creates some banner bearers. The Warlord box comes with three flags for the banners, but note that one of these is the naval flag, which is identifiable as the rising sun is offset from the centre of the flag. The easy fix is to trim one edge of the flag to centre it. It does end up slightly smaller but quite acceptable.

Still not sure whether I am happy with the basing. These are the Warlord bases glued to coins, then coated with a coloured 'goop' (a mix of paint and adhesive grout), then white glue (PVA) and 'Herb d' Provence' - a big bag of this will last for ever, and costs next to nothing. I feel like they need some more jungle.

But they are done, they can expect to face the Argylls when we can get back to FtF gaming, and eventually, I will get round to painting a US Marine Corps platoon so they can appear in an island-hopping game.

Now.. on to their opponents.. unless I get distracted by something else..  oops.. shiny!