Sounding a bit like Talking Heads, but it's been an interesting week. Not only has work been 'challenging', but for a couple of weeks I have been struggling with a laptop that has had serious issues. Basically, it needed a 'keyboard-ectomy' and I was struggling with typing without certain letters. You try composing blogposts, (or anything!) without 'S', 'W',  'X', & '2'.

I've replaced keyboards in other laptops, but this is a HP 255 G4. Meaningless to most people, but it's an integrated keyboard, meaning you don't simply replace the keyboard, you have to dismantle the entire device from the underside to get to the keyboard so the whole innards have to be disassembled, motherboard, fan, heat sink, connectors, hard drive, etc..  just to replace the keyboard. 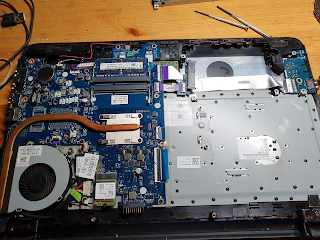 The HDD & DVD-ROM & DVD controller is off, still the fan, heat-sink, motherboard etc..  and see the expanse of grey metal revealed? Well; that plate is held on with literally dozens of little plastic welds, that need to be cut off, before you can even see the keyboard.

I can however reveal I am currently typing this on that very laptop pictured above. Mission accomplished, but what a mission! Very poor design. Nothing left over too, like spare screws, which is a good thing.

I also have been working on two TT Combat MDF buildings. I rather like these, they are very inexpensive, and since I always work up MDF buildings anyway, I don't need pre-painted or tons of surface detail. The roofs are from Warbases excellent tile-sheets. So far, I've surfaced and textured these, and done an initial paint-job, the roofs need paper flashing, one needs cap tiles, and both roofs need painting. 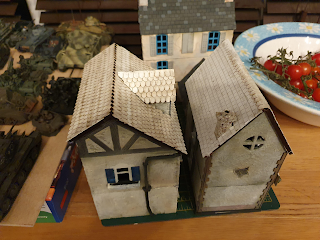 Actually finished..?  Well, earlier this year I misplaced a British 2" mortar team somewhere, so when I ordered replacements from 1st Corps, I went the whole hog and got two British teams, and for good measure, two German 50mm mortars as well. I decided while I had the field grey mix out; I should add in a couple of Warlord figures I had hanging around, a somewhat exaggerated officer and a medic. 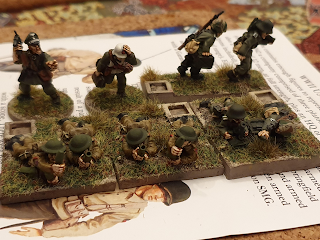 More work in progress, Kubel is done, so is the Char B1 Bis, the Pak 40 is just being started (why don't manufacturers make extra crew available?), a Resin Panzer IV I inherited and rebuilt ready for painting and weathering.  And then the Stuart is progressing slowly, there's a US jeep and two rather nice UK Airborne ones from 1st Corps. 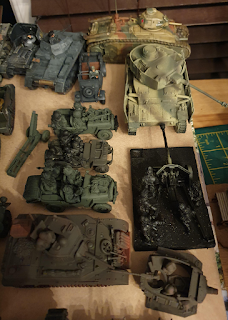 Finally, the major project progressed a little with the reorganisation of what I had in the stash into a recognisable Soviet 1941 platoon plus supports. These have been sourced from Crusader, BTD, PSC and Warlord. I reckon they will be all pretty much compatible once the paint jobs are completed, and I already have a Warlord/Italeri T34 and KV to go with them.  I am also eyeing off the absolutely lovely Rubicon Models T26 and upcoming BA10 to add to the support options, and make a great opponent for my Early War Germans, that can easily do double duty for June - September 1941 and Barbarossa. 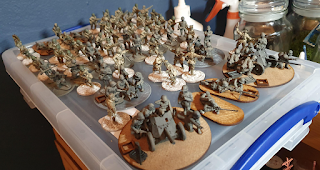 Finally, if you are anywhere in the vicinity on October 12th, the Angus Wargames Club are hosting Skelp in Forfar at the Reid Hall. It's a great wee show, and I hope to see you there. I will be with the Kirriemuir Club, helping put on our Wild West participation game, so come and say hello.
Posted by Doug at 21:46