My French army for Chain of Command is fairly well rounded out for supports, with mortars, AT rifles, a small (Hotchiss 25mm) AT gun, and a tripod mounted machine gun. But it needed some armour. After all, when you're facing the Blitzkrieg, it's handy to have some armour on your side.

I was very tempted by the Warlord/Italeri Char Bis plastic kit - mainly because it's exactly the kind of thing I love, bizarre, clunky, flawed, and just generally cool. And in plastic, which I prefer to resin. But hey, it's just too good. It could be overly dominant on the table in an environment where infantry anti-tank capability is overall pretty much non-existent, and opposing tanks are likely to be PzII, PzIII at best.

Plus, in Chain of Command terms, the Char Bis will only get deployed very occasionally, as it is a high cost support option. You will only rarely have a scenario where you have enough support points to deploy a Char.

So when Warlord had a recent two for one resin sale, I decided I needed to get some French armour, and selected the Somua S35 (which incidentally, may also be too good to appear very often), but also a Panhard 178 armoured car. I like armoured cars, in Chain of Command, they can activate and move when deployed, unlike tracked vehicles, plus the Panhard was a pretty effective vehicle for its day. 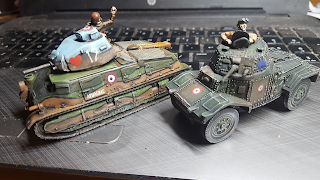 Decals are from the Warlord sheet, except for hand-painted roundels on the S35. Not perfect, but good enough for me. I chose one of the most outrageous French camouflage schemes I could find for the S35, and didn't attempt to go for a historically accurate marking scheme, just one that was 'plausible'.

The Panhard decals are very simple as is the colour scheme. Bit disappointed that Warlord chose to use a 'stereotypical' French crewman fro the S35, complete with Gauloise and wine bottle, but at least they supplied crew figures, some other companies could take note.

Paint job was masking with blu-tac on the S35, then an airbrush, and a relatively simple all airbrush on the Panhard. Weathering was a wash with GW Nuln Oil, a very light drybrush with a dusty cream, with light chipping using a sponged black (not visible on these shots).

The Panhard has already proved its worth, and I'm looking forward to getting the S35 on the table too.
Posted by Doug at 22:34