Well, that's it for another show. Carronade 2019 in Falkirk. I have a lot of fondness for Carronade, it's a decent size of show by Scottish standards, there are always plenty of traders and always some nice games on display. It was also the first Scottish show I attended when I came back from Oz.

I was there as part of the Kirriemuir Wargames Club, who put on a splendid Wild West 'Wanted' game, though it would have been nice to have a few more volunteers to participate.

Pictures of the games to follow after a bit of editing, crop out stray arms, reduce sizes, that sort of thing.

Overall, I thought it was a pretty good show, it was busy and lots to see. The Flea Market was a bit hit and miss though, as vendors booked tables for fixed time blocks, so you basically needed to head upstairs every hour if you didn't want to miss anything. As usual, there seemed to be a lot of spikey chaos plastic, but there were some pearls among the offerings. Chatting to folks it seemed like there were at least two tables that were mates selling off for a deceased estate. Just remember folks, appoint a wargames executor.

One positive trend was that there were quite a few women helping out on tables, as vendors and as participants, so that was terrific, although it might be my imagination, but there seemed to be fewer children.

Anyway, a good day, and I managed to maintain (fairly) admirable self discipline and focus, despite temptation. Stuff for my Chain of Command games, (for It is a truth universally acknowledged that US infantry not in possession of a good position must be in want of a Sherman), I love Panzer II, so I couldn't walk past that, and WarHQ didn't have the plastic Warlord Char Bis, but offered to send it to me post free, with the show 20% discount. What nice chaps!

I picked up a couple of the very inexpensive MDF shells from TimeLine /Hoka Hey, (who also had a very impressive Old West locomotive and carriages in MDF and resin), and another set of walls to extend my existing set, from Red Vectors. Finally, I love warbases stuff, but didn't really need anything from them this time, so I contented myself with a set of Fleur-de-lys jump-off and patrol markers. The Russian houses can wait till I paint my Russians! 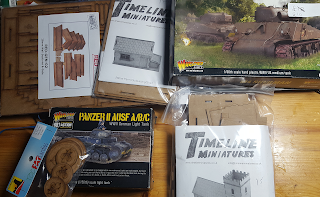