Avid readers, aka myself, will recall my resolution o actually finish a project this year, unlike just about every other year. So if I can resist the temptation to keep adding stuff* the one probably closest to completion is the Chain of Command North Africa forces.

(* stuff like the iconic Sdkfz 222, and probably only iconic thanks to the Airfix German Recce set.)

I have completed some desert buildings, other terrain requirements are minimal..  and also completed some AFVs for each side, respectively, a Kubel, Sdkfz 231, a Pz II and a Pz III (I still have a motorcycle combo to finish painting, plus the aforementioned Sdkfz 222 on its way), the Brits have a Honey light tank and a Crusader II.

I suspect reading this, I will have to add some more options for the Brits, so I shall keep an eye out for bargains in British early period armoured cars or carriers).

On to the main course. Chain of Command - hereafter referred to as CoC, is an infantry game first and foremost, and the primary forces in play are a platoon plus supports. So the main thing I need to get painted is the infantry. Roughly 40 figures per side, and as fortune would have it, the Perry plastic 28mm figures are ideal for this. On with the painting - here's a sample of the progress to date. 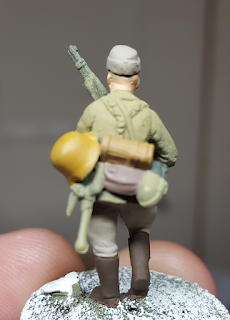 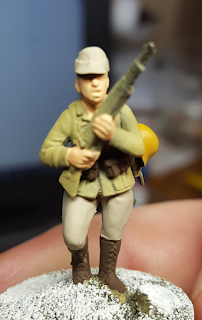 It's not quite Cletus the slack-jawed yokel, but the closeup reveals that Hans might just be a transported farmboy from Swabia. And that I didn't clean a seam under his right arm.. doh! Still, as this is about twice actual size, it isn't particularly noticeable on the actual figure itself. What is noticeable on this one is just how large the helmet is. I wonder whether I haven't accidentally used a Warlord helmet?

Anyway - so far, the process has been:


Next steps are the straps.. I really should have done them earlier, but I tried using German Camo Beige from Vallejo and they simply didn't have enough contrast with the jacket. I am going to try the Vallejo Medium Grey, which is a slightly brownish light grey and see how that works.

The British meanwhile have received stage 4. an airbrushed undercoat of 'desert yellow' (Tamiya) - and straps have been done in 'Russian Uniform' (Vallejo).

Once the straps have been done on the Germans, there will be some touch-ups, boot covers, the entrenching tool and the rifle to be done. I intend to use the various browns in this process to also add hair to the figures. That will complete the block painting. I look to do the faces after that, then the next step will be sealing with gloss primer, decals!  (yes really..) and doing some washes and weathering. One of my recent purchases was the Vallejo 'Desert Dust' wash, and I am wondering how that will work on these figures.