My last post was my 1943 German Tunisian force. After the last game I offered to face Dave's Panzers, and elected to paint up some 1941 Western Desert Commonwealth forces. The tanks are a mix of Crusader I, Matilda II, A9 Cruisers, and that behemoth, the Vickers Light Tank VIb.

I shrank the historical composition of a couple of regiments to get the mix, supported by 25llb RA units, universal carriers, armoured cars (including a venerable Rolls Royce) and a few motorised infantry. The pictures show the undercoated (Iraqi Sand) vehicles getting a first few stripes of caunter camouflage, using a very thinned down Citadel Knarloc Green. Next step will be a very thin third colour using Citadel Space Wolves Grey, which to my eyes, should work as the grey (slate) colour that apparently faded down to a blue'ish shade. It seems that theses have been written about these colours, but I have elected to go with works for my eye. So here's the WIP. 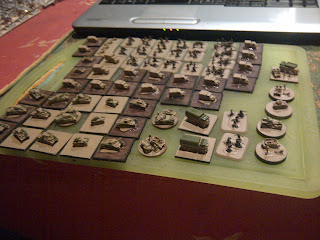 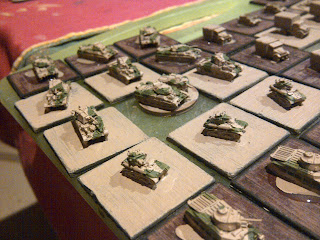