So after last times 1943 Tunisia battle, we went back to the earlier period. My Commonwealth forces were a scaled down version of the Forces used in Operation Battleaxe, June 1941.

Dave brought along a force including motorcycle battalions, Italian tanks and infantry, so basically neither of us brought super-troops..  although in period, the three Matilda II I fielded were pretty powerful.


Early days for the British weren't promising, a series of low rolls, then a couple of command blunders, and one arnoured brigade (7th) didn't show up for the first three turns.depite trying to use the CO (Major-General O'Creagh) 'do-over' roll. (In BKC, the same as Cold War Commander and Future War Commander, each HQ or Command unit is assigned a Command Value, this is the number that must be rolled at or under on two six-sided dice to successfully issue an order. Penalties apply for issuing orders to other formations, or troops too far away or in some cases, issuing diffenet instructions to the units under command. The CO has a 'do-over' roll  - so I tried to use it to bring on the 7th Armoured, but failed several times. Brigadier Hugh Russell would be getting a 'rocket' at the debrief.)
﻿
﻿Finally, 7th Armoured arrived. I didn't want to rush too far forward before they arrived, and I didn't want a possible Axis artillery barrage to hit my softskins while they were all bunched up. In game terms, the 7th Support Group is too big to do two critical things..  disperse far enough to not present an ideal artillery target, but not so far that you are suffering command penalties for parts of the group. It makes it slow to push forward, unless you focus on only moving bits of it.

The Forward Artillery Observer seems to have parked his Unversal Carrier on top of the mosque on the hill in the centre..  a handy spot.
﻿
﻿﻿﻿

In the background of this shot are three Royal Artillery batteries (one model per battery) and I included 2 Forward Artillery Observers in my force. Each of the 25lb batteries fires with an effect of 3 dice per battery, and with the observer higher than the target, plus the famed British Artillery accuracy, essentially this means, if you can make the command roll for one fo the FAO, you can call down a storm of fire - attacking any element in the target area (20cm diameter for a 'concentration') with 9 dice.

Against softskins and infantry i the open this can be devastating  - and even against armour, there is a reasonable chance to 'suppress' them so they can neither move nor fire. I managed three successful 'shoots' in the game, and each one was very effective. I was grateful that Dave had not brought any artillery himself.
﻿﻿﻿﻿﻿﻿

The first German tanks started an advance but were hit by 'Opportunity Fire' by the opposing 7th Armoured and smashed up before they could have an impact.
﻿
﻿﻿﻿﻿﻿﻿﻿﻿

7th Armoured then pushed forward, and with the support of an artillery barrage, plus mortar attacks on the German Anti-Tank guns, started an exchange of fire with the DAK PzIII and PzIV on the hill. With the artillery and mortars suppressing many of the German units, and despite losing all the (exceptionally fragile) A9 Cruiser tanks, the Brits were winning this exchange. The Germans had no answer to long range artillery and mortars, and advancing into the stationary fire of massed British Crusaders supported by 2lb portee units was not the answer.﻿﻿
﻿
﻿On the other side of the table, the Italians had little answer to the heavily armoured Matilda II tanks, they destroyed a Vickers light tank, over-ran and forced back an FAO, but were then unable to make any impact and lost several of their number.﻿﻿ 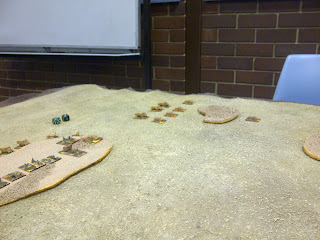 At this stage we called it a night. Cracking game from my side, and only really one reference to the rules required (can multiple FAO attempt to call fire from a sngle battery?)