The last game we played was somewhat rushed in preparation. I finished off both the British and Japanese platoons for Malaya earlier this year, but have been waiting for the publication of the Far East supplement by the Too Fat Lardies for Chain of Command. The rules for jungle fighting in CoC seem to have had a couple of iterations and my thinking was that I should wait until they were finalised. But whatever. Martin was coming round, so I used the first scenario in the 2015 Christmas Special Malaya Campaign.

British troops are defending a position astride the road, the Japanese attempting to push through. A cracking game, the British eventually being forced to pull back. It was notable for the use of a Boyes AT rifle, a Lanchester armoured car, and a Japanese Ha Go light tank... and some astonishing dice rolling. 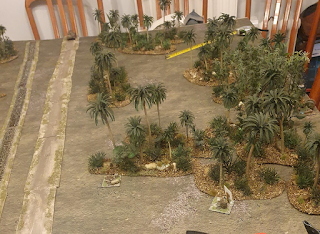 And I realised three boxes of Jungle terrain was insufficient...  the British are closest to camera while the Japanese have snuck a jump off point right up the British right and in secondary jungle. 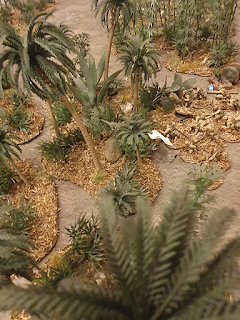 Which the Japanese emerge from, but can't advance as they will be facing a British section on overwatch and would take heave casualties. 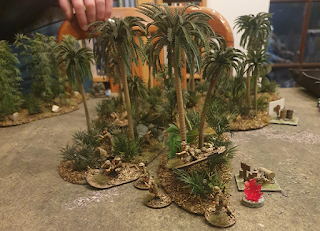 One section plus the AT rifle are in the treeline, the section have entrenchments, (not depicted as I couldn't find the box they were in..) - and being in different cover, I was able to target the AT team separately. 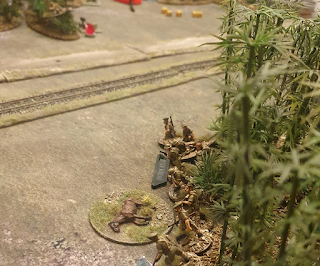 The other British section on overwatch on the British left, also in entrenchments... 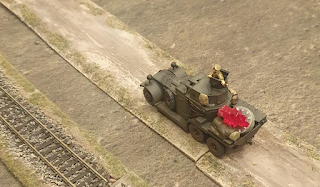 Here comes the Lanchester, 0.50 vickers spiting death.. or not. 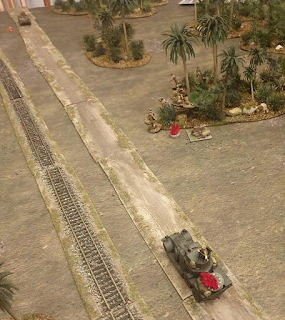 The distant Ha Go is getting the better of the exchange...  what's that you say, AT capability of 4 x d6 and 5s and 6s are hits?  Ka Boom! 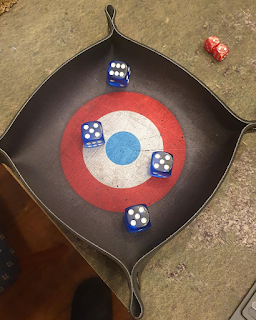 The Japanese knee mortar squad plus a tripod MMG are taking all the hits, and losing men in the unequal fight with Marin's entrenched infantry. 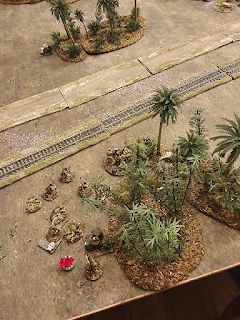 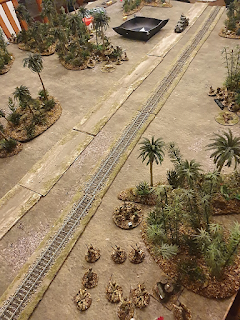 Not helped whenMartin adds a mortar to the mix - the MMG is lost and the knee mortar squad retires behind cover, I add a senior leader and start trying to get them back into some sort of order. 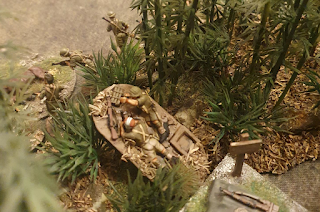 I've pulled back, and the wounded Junior leader needs the platoon sergeant to help him out 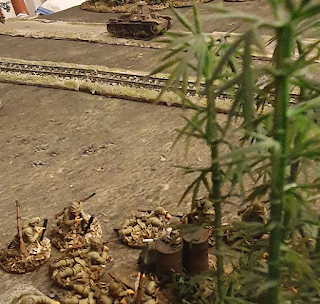 However, as the knee mortar squad pulled back, I started to score hits on the British centre squad, whittling it down with the Ha Go and the central Japanese squad until it broke. Martin saw the writing on the wall, and tried a Hail Mary shot throwing his left-most squad into hand to hand with the survivors of the knee mortar squad..

It was brief, and bloody..   reducing the Japanese Force Morale to 2, but it now left Martin with one remaining squad, nothing to deal with the Ha Go and two relatively intact Japanese squads. He decided withdrawal was the best option...

Thoroughly enjoyable as always and a very close game.