Some time back, I saw that Plastic Soldier Company were advertising pre release pricing on company boxes of 15mm Cold War Soviet infantry.

I already have a Danish Cold War (c 1985) force, which is largely outclassed by most modern forces of the period, so I thought it would be a great opportunity to put together a cheap opposition force, representing a second line Soviet battlegroup, so that the poor Danish Centurions and M41 were not outclassed completely by Soviet T64 and WarPac T72. The plastic PSC T55 would be ideal.

Just a day before Christmas, a package came through the door containing the PSC Soviet Infantry and the PSC T55 plastic models. Excellent! 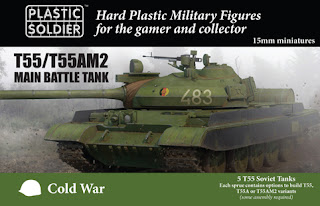 As is the case with all the PSC products I have purchased in the past, there is a simple instruction sheet, showing assembly in the form of an exploded diagram, and on the reverse, a colour coded sprue diagram which is matched to the various options to assemble the basic early Soviet model T55, the T55a, Polish, East German and Czech variations, and the modernised T55AM2.

I am no huge expert on Soviet hardware, but I would check carefully against published images to make sure you are selecting the appropriate turret hatches and snorkel arrangement. I found the colour coding to be unclear in a couple of places, and the colour variation not sufficient for me to be able to definitively decide whether I was looking at a pink or lilac component, or differentiate properly between a dark yellow and a palled orange.

If I was colour blind, I would have struggled to differentiate between parts. Bit of a black mark for PSC. The colour thing is a neat idea, but numbering them as a backup would make it more user friendly.

There were other downsides to the kit, that were unusual for PSC. I found it difficult to get the very nicely detailed one piece track assemblies to lock into place without strong clamps, as the peg and slot don't have a great fit, and this becomes a big issue if you are building the AM2 model, as the side skirts have a groove designed to allow the tracks to sit in. If the running gear isn't properly aligned, you will be in for a lot of cursing trying to get the skirts to sit in place.

Secondly, it wasn't easy to determine from the instructions, exactly where the left hand turret box and the smoke dischargers were supposed to sit. Again, photographs recommended.

Finally, the hull top to bottom hull alignment is one to take care with, it is a butt join along the edges and while the rear sits into a recessed section, the front is free floating, and it's not hard to get it out of a straight alignment as there are no teeth or pegs to lock it in place.

Alright..  minor nuisances dealt with, I was delighted with the results. I built 4 out of the 5 as the AM versions, leaving one as a much older Soviet T55 so I had it for possible African conflicts.

Painting was a black undercoat beneath, a grey one on top, using my standard spray enamel cans from the local hardware place. Following that I pulled out the cheap airbrush, and gave a light undercoat of a much lightened Vallejo ModelAir Olive Green. Adding more white, I went back over three times to give some light and shade (modulation).

The effect is subtle, but otherwise - washes and highlighting would do a similar job. It was then a case of adding base colours for tyres, tracks and machine gun, and giving the gun a quick wash with GW Nuln Oil. Once that was done, I grabbed some old Battlefront decals and some Decal softener, keeping it very simple. I thought about extensive weathering, but these would be basically new vehicles, recently refurbished to AM standards, and it's the first days of a war, so not much time to get everything worn and rusty.

A spray of gloss varnish to seal everything, added lamps and headlights in dark blue, with Bavarian blue and white highlights, matt varnish to get a sort of 'Satin' finish, and dabbed some gloss varnish on the lenses.

Overall you could build these 5 from start to finish in a day no problem. So the finished product, good enough for wargames I reckon! 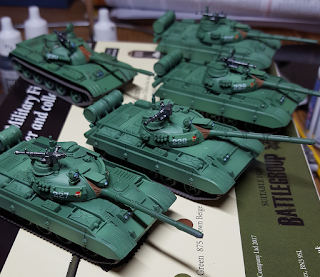 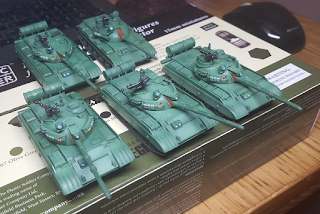