Chocks Away with the 20 Minuters

Or as they say, it's not all a bed of roses in the Womens' Auxiliary Balloon Corps. Enough Blackadder references. Suffice to say that I have always had something of a thing for WWI aircraft, a diet of Biggles books as a child, movies growing up.

A perfect confluence of events - the purchase of a hex mat to play Battle of Britain games, Alex from Storm of Steel making the 'Algy' rules from the Too Fat Lardies available, a 3d printer and perhaps most importantly, Jimbo from the Virtual Lard Discord channel generously sharing the STL files he has created, next thing you know I have way more 1/144 WWI aircraft than I will ever need.

Early prints without crew but showing just how lovely these little things can be...
So my regular opponent and I got out some early war Fokkers and DH2 - 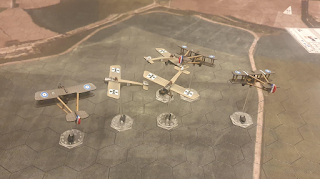 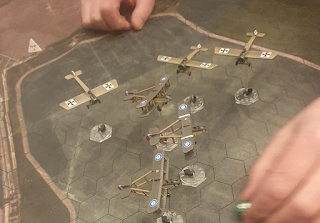 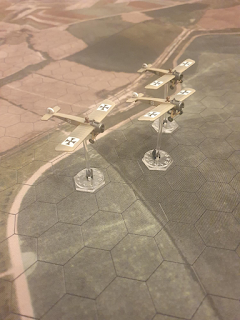 Much fun was had as we tried to get on the tail of the opponents, and in the end - the British Flight Leader was forced to return to base with a damaged engine, while the German Flight leader survived a series of hits including one that severed his fuel line. Each side had one pilot lightly wounded and a great deal of ammunition was expended to little effect. But all of them survived their 20 minutes.
All in all it was great fun, and who doesn't love a game where you can shout 'Tally Ho!' and make 'dakka dakka' noises?