Only lightly censored, I've added another group (12 figures) of rebellious Scots - ready too be crushed by the forces of the Crown.

For a bit of fun, I threw in the 2 'Naughty Highlanders' figures from the Flags of War range, (censored here - just lightly), and I believe the only non Flags of War figure in the collection so far, a piper from Alternative Armies, picked up when I purchased their Highland civilian women. To my eye, the Alternative Army figures are not as crisply sculpted or aesthetically pleasing as the FoW ones, but are pretty compatible in height and bulk. I also drafted in a standard bearer, as I didn't have enough of the Highland ones. It will pass. 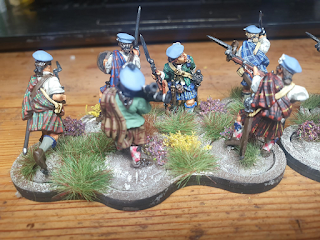 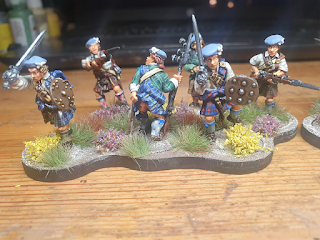 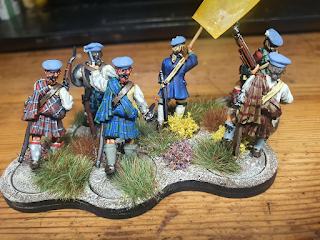 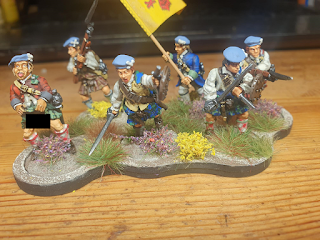 And with that, I am now over 50% of the Jacobite Groups. And only another 24 Highlanders to do. The Lowlanders will need some care and attention soon, but next up, I think a few Government infantry units for balance, another two or three of those will give me enough for a first 1745 Sharp Practice game.  It's been a long road since 2018, but it feels like real progress.
Posted by Doug at 08:50