A Viking we will go!

I bought into the War and Empire III (Dark Ages) Kickstarter some time back, and ummed, and ahhed about what to get. I originally wanted to get Byzantines, but on looking into the various lists available for DBMM, I thought they were a bit too much like some of my other armies, such as the Sui Chinese.

I eventually settled on Viking and Later Roman, and they arrived last week. I have been tentatively planning a trip to Warfare in Reading in November, and so the Vikings would fit into the theme.

I finally picked up a paintbrush today, and my goodness, these are tiny figures, I have not painted any 15mm in several years, so slapping paint on these little guys was a real change.

Normally, my painting pattern is to do a whole swathe of figures at once. So for example for a Viking army, I might do all the Huscarles as a batch, all the Bondi as a batch, and so on. This is efficient, but it can also be very tedious as you spend a long time with a single colour. Applying it to pants here, tunics there, cloaks etc. This time I thought I would just grab up a few elements worth and tackle them together. 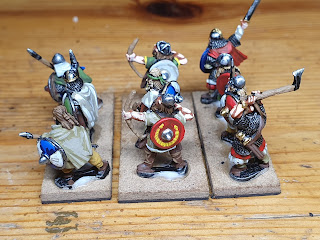 I really like these figures, and they have a heap of variety. Looking forward to polishing off a few more batches over the next couple of weeks.