So I realised it has actually been a long time since I reported a game. Well, I played a really fun game tonight, of 'Signal Close Action - Quick Play' by Langton's. Signal Close Action is designed to allow you to play Napoleonic naval battles (- preferably using Langton's excellent miniatures of course).

The full version of Signal Close Action is extremely detailed, and (in my view) you need to be an actual skilled sailor, and to play very frequently to make anything other than single ship actions playable.

Signal Close Action - Quick Play is greatly simplified, but gives a really good game - it has a fun narrative quality, and works well with a few ships a side. We haven't tried using more than four or so ships each, but the squadron rules would let you handle quite a few organised into relatively homogeneous groups. The whole game is handled with minimal book-keeping - unusually for naval games, and works quite elegantly.

Mechanics are 'I Go - U Go', - in each player turn declaring intended actions -  the sailing settings (turn/direction, increase/decrease sail), fire (at hull or rigging), assemble boarders, fight fires and so on. This can be by squadron or single ships. Three normal d6 are then rolled, and the result checked against the action chart to see whether the intended action was successful or not. Extreme dice rolls can lead to either very bad consequences, such as a gun exploding during a broadside, or an extremely good outcome, such as a particularly well-laid shot knocking out an enemy's steering. The rolls are affected by crew quality and the current levels of damage to the ship.

John came over with some British ships, and I grabbed my trusty French. We decided to randomly determine crew quality, with the increased chance of French crew being poor sailors being compensated for by my having a 64 gun vessel as well as a small 74 and a 32 gun frigate versus the British with their 74, 50 and 32.  As luck would have it, the French crews were all 'Average', while the British frigate crew were 'Good' - but unfortunately for John, the 74 had a 'Poor' crew. The scene was the West Indies, wind from the South the French and British squadrons on a converging course, being careful of the shoals and cays that were frequent hazards in these waters.


SCA immediately lived up to giving us an intriguing game..   the French frigate crew managed to fluff a turn, and collided with their own '64...   immediately causing damage to both ships rigging, and leaving them hove to, while the British sailed serenely towards them...  (a roll of 3 on 3 x d6 is never good...  but at this stage I still had time to disentangle myself.

The British frigate had steered upwind, and was clearly taking the wind gage so as to be able to work around the back of the French squadron and rake the sterns of the bigger ships. As is correct historically, any frigate tangling with a 74; unless with some massive advantage, will simply be blown out of the water. The French couldn't afford to break up their main line of battle. so sent their own frigate to intercept. Both frigates started to deal some damage to each other as the two-deckers closed. The British leading with the 50 gun 'Centurion', followed by the 74 'Swiftsure'.

A melee between the two lines of 2 deckers traded some damage, but with an angled line the French were concentrating their shot on the leading Centurion - hoping to damage it enough to be relatively ineffective and allow them to concentrate on the more dangerous Swiftsure.

Shots were traded for some time before the lines passed with the French trying to beat upwind to better position while the British ships maintained formation. Overall the French had the best of it, as the poor crew of the Swiftsure could not easily find the mark, and were forced to endure a broadside at close range from the French without reply.

Not quite all was going the way of the French Admiral however; the frigate was trapped between the upwind frigate and the main British force, took serious damage and was forced to turn tail and run..  exposing herself to a possible stern rake from the British frigate...   which instead experienced a horrific explosion on the gun deck as a carelessly swabbed 18lb gun blew itself to bits..  causing serious damage and starting a fire. (The British ship had in turn rolled a total of 3 on 3 x d6, while attempting to fire, and then to add insult, rolled a total of 3 on 3 x d6 for the effect).

With the cumulative damage, the frigate was barely an effective fighting force, not only with her port broadside badly reduced, but the other damage and crew losses making her less useful (for each 'defence capability' or 'DC'  lost on one side of the ship, that broadside is reduced in effectiveness, and for each DC lost, the dice roll on the ability chart is at -1). She gamely kept fighting, (having passed a morale check), but was then hit by a broadside from the 64, and finally hauled down her colours.

Manuevering to avoid the shoals, and seeing a collision with the French frigate inevitable, the captain of the Swiftsure made a virtue of it and assembled boarders - only to find these beaten off by the smaller ship...  (the boarding check is a simple table, but the poor crew quality and the previously sustained damage of the Swiftsure allowed the smaller crew to repulse boarders..)

The French crew now attempted themselves to board the much larger British warship, but these too were beaten off...  Finally, the Swiftsure broke off contact to pursue the French 74..   leaving the French frigate now stationary and damaged, to be finished off by a stern rake from the Centurion, that left it little more than a waterlogged hulk...

Now with the two frigates out of action, the virtually undamaged French 74 had set a converging course for the Centurion as it passed beyond the stern of the hulk..    reaching close range the French gunners poured in a murderous broadside..    and the Centurion exploded as her magazine was struck!. 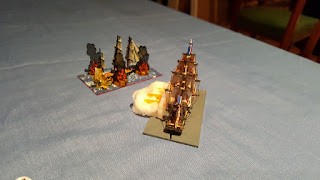 With the virtually untouched French 74 and the damaged 64 to contend with alone, the Swiftsure's captain elected to withdraw, leaving the French victorious and in possession of the surrendered Briton.

I have told John to get some new ships..   his just seem to be terminally unlucky..  I did manage to miss one stern rake myself with a roll of 5, but after the first clumsy collision, I didn't get the disastrous low ability rolls at critical times. He was even unlucky with the crew gradings, as the probability of a Poor crew was higher for the French.. not only that, but his most powerful ship.

The final murderous dice roll was really icing on the cake, an already damaged 50 gun ship stands little chance against a virtually intact 74, so he needed some serious luck there,(not unlike the luck I had really..) to turn things around, and with the effect of poor crew quality exacerbated by the damage she had taken, the Swiftsure was going to struggle even against the smaller French 64.