The title of this post refers to a newly published set of rules for small scale naval engagements between the fairly primitive ships of the 1500s up to the pirate ages of the early 1700. Published by Ganesha Games, it uses their classic initiative dice activation system and a rather neat little set of sailing rules for lateen rig, square rig and galleon rig.

Jon happened to have a copy of this that was surplus to requirements, which he generously passed on for negligible cost.

A quick glance through, an After Action Report posted online for inspiration, and I was hunting around for my Demonworld 'Empire' ships, purchased some time back from Ral Partha Europe.  I picked up the fleet pack, but really, the cogs were too early to be suitable, so these will be added to to create a flotilla for use as naval elements in DBA/DBMM.

So today they got stuck down to some 'Polemos' 60 x 30 bases. A squirt of black car primer and a quick paint job. Tomorrow they will get ink washes on the rope work, and I will add some acrylic gel and white highlights for water effects. 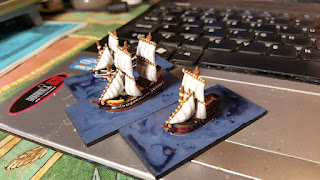 Two Galleases and a Galleon. No real published scale, and at first I thought nearly 1/2400, but on closer examination, they are probably much closer to the 1/1200 scale.

I will be having another look at the Demonworld stuff, they aren't particularly cheap, but they are nice simple casts, they assemble easily, and the detail is good.