Just a couple of shots of work in progress. 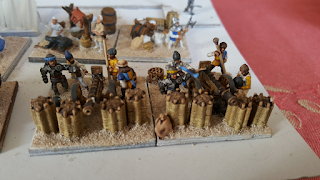 Artillery park..  pretty much done other than basing, I do like how the gabions have come out on the base, but I think I may have to add an additional highlight to the wicker. 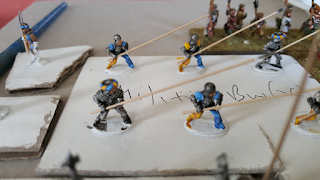 Militia spearmen, these will be combined on bases with crossbowmen, and a row of pavises to make up Bw(X) in DBMM terms, a mixed formation of bow and spear that can shoot, but isn't as vulnerable as unsupported bowmen.  Unusually I think I am going to have Bw at the front of the base with the long spears behind. I think it will look better, the spear points will protrude less so handling will be easier, and I think it will look cool. Only three of these bases are allowed in the army. 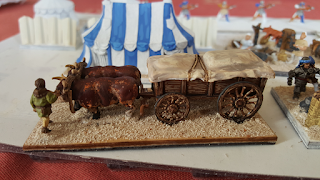 Ox-cart. Quite pleased with how this is turning out, I need to add highlights to the peasants tunic, touch up a couple of spots, and of course the base still needs a lot of work, but this will be very useful as baggage for any sort of medieval army. In the background is the Ducal tent, which has some base colours applied, but needs a lot more work. On the right you can just see the 'pig on a spit' base and the top picture shows this and the 'defend the loot' base. Both need very much more work.
Posted by Doug at 06:59