A casual comment by a friend that they were doing some Cold War stuff in 20mm caught my attention. Jason is using Bolt Action, but there is also the Too Fat Lardies Chain of Command (CoC) - now on special at 20% off for the WWII version, and the possible release of the Lardies 'IABNM' (I ain't been Nuked Mum').

Well, I already had some bits and pieces, and 20mm is dirt cheap. So looking at what I had, and what was out there, I figured I could do a quick and dirty USMC platoon plus supports. I don't much like the 'Super-Tanks' - and for someone of my vintage, Cold War is always going to be say 1979 - 1984. Add to that the super-cool MERDC camouflage, and it was an easy choice. I had toyed with the idea of BAOR (British Army of the Rhine), but someone else locally was already collecting that. Marine Amphibious Unit 32 used M60, LVTP7, Dragon ATGW, Cobra attack choppers and Sea Knight Helicopters, plus various support options such as 106mm Recoilless Rifles.

First up, a 1/72 M60A1 tank.. this was a MARS (Galaxy) kit, supposedly of a M60A1 with reactive armour, but I already knew from the review on 'OnTheWay' models, that it didn't have the reactive armour. 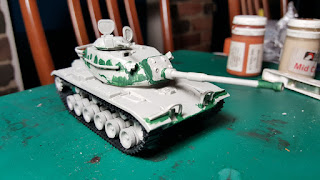 Note the amount of green stuff. Not an easy kit to build. The tracks are too long and melt with superglue, none of the turret rails or attachments actually fit into the cast 'depressions' (not holes). But it does have the look of the thing. 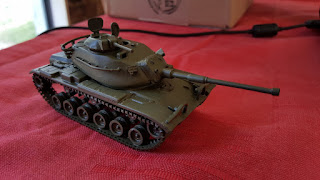 Quick squirt of the PSC 'British Green' for an undercoat. 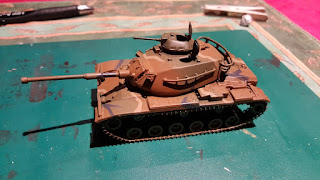 Get busy with the airbrush, I used the Citadel Base Colour XV-88 for the tan, Citadel 'Zandri Dust' for the sand, and Citadel 'Eshin Grey' for the 'black'. Plenty more work (chipping, weathering, added gear), but a good start.

For the Marines themselves, I grabbed a box of the excellent, ESCI 'Modern US Soldiers' - 'Modern in this context circa 1980'ish. Lovely casts, practical poses for wargaming, and 50 figures in the box gave me enough for 3 x 13 man squads, a command group, spare torsos for the M60A1, plus additional ATGW teams with the Dragon missile.

One of the appeals is that the Marines can use the unusual LVTP7 amphibian, readily available cheap as a pre-made model. This one clearly needs a repaint! - In the background is a Blackhawk, just being introduced at this time. This one is another pre-build, from a magazine, and in Desert colours. Some more repainting required. Ideally, it would be a CH46, but those are either hideously expensive or impossible to obtain. Obviously this UH60 is brand new, and being trialled.. ;-) 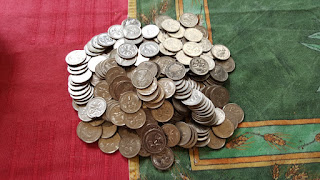 And as every bloke knows, you end up with a heap of change over time, so I raided my coin bucket. I like to base my plastic troops, to give them a bit more stability, and also so the figure itself doesn't get so much handling. A decent undercoat and acrylics really helps prevent the old flaking paint problem, but every little helps. I could have bought bases, but Australian 5 cent pieces are an ideal size, and work out way cheaper than washers or custom cut bases. 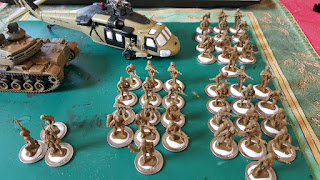 So - PVA on the coins - later they will get a PVA and sand coating to really make them solid. You might note that the windows of the Blackhawk have gone white. I thought about this for a while, as the pre-build has clear plastic window pieces, and I could have just oversprayed, then painted them in blue, but I am trying an experiment. I have painted over the clear plastic with PVA. Once this has dried, I will do the repaint, then try and peel off the PVA. I haven't tried this before, but I have read about it.

And yes..  success..  the windows peeled off easily, and the 'mask' worked perfectly. 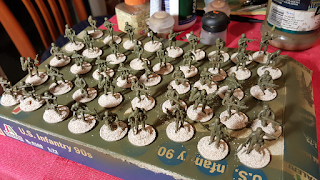 And the grunts got their bases coated with PVA + sand, next step, a dry brush with a pale olive green.


I have a Huey Cobra attack helicopter and two more LVTP7 on the way (pre-builds), cost, next to nothing, and I reckon this will be a cool little unit. Not sure about game effectiveness, but these are big squads, loads of firepower, and they're Marines...  'Ooo-Rah!'
Posted by Doug at 02:29