So over the years, as if by accident I have managed to acquire a fair amount of lead that would be suitable for Italian Condotta.

First it was winning a DBA sized Mirliton army, then picking up bits and pieces to pad it out - initially I intended to do a Venice in Greece style army for DBMM, with very small numbers of Knights, but supported by lots of Light Horse. Some of it got painted (badly, in a hurry), but most of it just sort of hung around in various stages of undercoat or raw lead.

When I went to build my Wallachian army, many of the figures intended for the Stradiots got cannibalised for Wallachian and allied Light Horse - then I was given another Mirliton DBA Condotta box. I started looking at various armies for something that caught my fancy, but other people at the club had, or were intending to build Florence, Venice and so on. Cesare Borgia's Papal Army looked interesting, but the heraldry didn't inspire. I thought about the Northern League, but I don't much like the idea of a red cross on a white background.. dull.

Ah-hah.. what's this imperial eagle quartered on a snake eating a man.. excellent. Sforza, and the DBMM list for Milan has plenty of fun options, including the options of Romagnol mercenary pike, Swiss Allies, Landsknechts and even city militia pike. So lots of colour, heraldry, and the luckless Ludovico Sforza as the commander. Ideal for the Battle of Novara, 8 April 1500.

A quick lead audit later, and I would only need to add some additional Knight to make the minimums, plus if I wanted a Swiss Ally, those too would have to be on the purchase schedule. The old lead would have to be stripped of course. But now they are all ready to go under the brush. 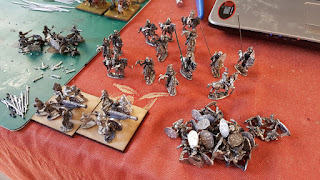 The observant will note the patina remaining after paint stripping using oven cleaner.

So then it will just be a matter of deciding which ones to use in a game as this is a lot more than the standard 400AP worth we normally game with.
Posted by Doug at 09:24