So - in between moving stuff, I decided to have a bit of fun. I had a bag of Houstons ships - roughly 1/1000 pre-dreadnoughts, available from 'Great Endeavours' and I put these together.

Now people say that the moulds are old, and yes, there was a bit of scraping, filing and filling to do, but these ships have serious character. So here's my Brits - assembled and waiting for undercoat..   HMS Dreadnought, Collingwood, Orion, Thunderer, and Alexandra. 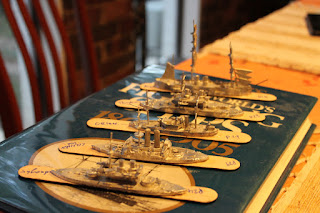 And of course they are sitting on top of my Conway's "All the World's Fighting Ships 1860-1905". I got mine for about Aussie $45.. but I have seen them sell for as much as $120. If you see one at a price you can afford, and you have any interest in pre-dreadnoughts, buy it! You wont regret it. Line drawings and photographs plus essential statistics and summary for every warship in this period.
Posted by Doug at 09:31