Game three and Mark Baker and his Early Hoplite Greek. A stunning looking army, and what was also lovely was that Mark had commssioned some beautiful terrain pieces that really made the board look stunning. A beautiful Vineyard for the camp, small tree groves and a suitably rocky waterway (yes.. Waterway no. 3), curse those DBA 2.2 Terrain rules!

Essentially the EHG are all Spear with 1 element of Cavalry and 1 element of Auxilia (Thracians). And Mark had little option but to extend his line and try to deny me room.
I did the dancing Ayyubid trick, meanwhile eyeing off the two vulnerable parts of his army (the cav and Auxilia.. )
Once I had forced him to respond, I was able to switch elements back, and Mark unluckily lost his cavalry to a bad die roll, and very rapidly the situation deteriorated for him with two split spear wings, and my cavalry free to pour through the centre. he tooks some risks to retrieve the situation which didn't come off, and it was soon game over. 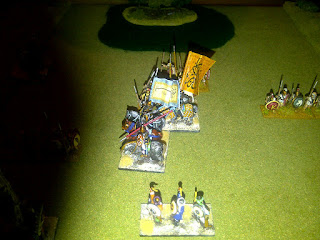 With a relatively decent open area to play in, the Ayyubids did what I wanted to do with them. I was lucky in the early combat, but Mark simply did not have the mobility to respond to multiple mobile threats, and I had the PIPs to exploit when necessary. This was how I had hoped the Ayyubids would work.