The British are Coming

I did promise an update on the various British vehicles I have lurking, so here goes:


I know how I ended up with two Humbers but in hindsight, well, I should probably sell one.. 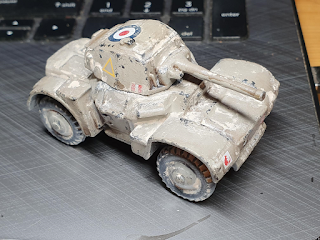 Finally a Corgi model Daimler Armoured Car. I was using it to play with various weathering techniques, some of which are a bit heavy -handed! I figure I can add some stowage to hide the fairly basic model, and it will look ok.

And managed to gte a good CoC game on Sunday with the boys at Kirriemuir, a fairly simple attack and defend scenario, with US GIs defending the outskirts of a Norman town against a German infantry counter attack.


The game was also notable for  a sniper duel, in which the German sniper couldn't hit the side of a barn, and the US one was even worse!

The rather nice 3d printed houses are available through WarHQ.

A good time was had by all. Now..  Claymore in Edinburgh on Saturday.
Posted by Doug at 22:20