So after Thomo and I started comparing sizes, I thought I would haul out the lead and see what was there. I have already painted and based most of my GHQ/CinC Deutsches Afrika Korps, and that's a few thousand points. I also have an Early War German force all in German Grey, which a few substitutions can do either the 39-40 Blitzkrieg, or 1941 Barbarossa.

I started by looking at all the stuff suitable for Italy onwards. I figured I could get away with basing and painting them all sort of similar, and then swapping in and out things like Fallschirmjager and so on, to cover Italy, Normandy and the Eastern Front.

I picked up most or nearly all of this stuff in job lots off eBay or TMP, so there were a lot of oddities, to which I have added bits and pieces when GHQ has had their sales. I also swapped a lot of bits and pieces, because originally I had no intention of building a Late War force, (I didn't want wall-to-wall Waffen SS and Tiger II).

Anyway, I asked Dean at Olympian Games to cut me some 30mm x 30mm bases. Glued the models down using PVA glue, (I like the way that the model sits 'in' the glue, making it look like it has some weight and partially covering tracks and wheels).

For this lot I thought I would try a slightly different painting technique. So I spray undercoated very thoroughly with a cheap flat black spray can. Once this dried, I then oversprayed with a Testors 'Modern Desert Sand' - which is very light in colour. The results have more depth than a single solid undercoat. 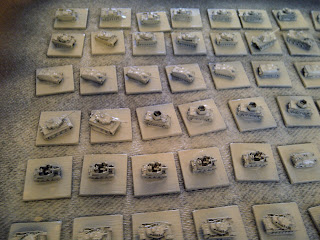 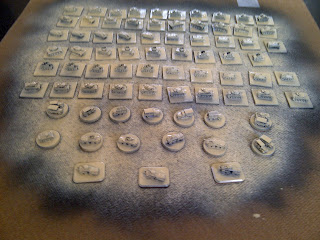 Next steps are to apply a tan and a green ambush pattern using very thinned paint. Once this is done, tracks and any tools/details and so on. I will then wash with a very thinned dark brown ink. This will darken up the very pale yellow base to a much more realistic shade. I have in the past used GW Devlan Mud, but this is now hard to get hold of.
Posted by Doug at 06:18