Martin and I have been playing the Chain of Command 'Pint-Sized Campaign' Operation Martlet. It pits a platoon from the British 49th Infantry Division against forces from the 12th SS Panzer Division Hitler Jugend. 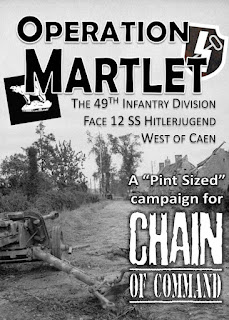 Up until now, I have been using my basic Mid-Late War Heer figures as substitutes, because of my discomfort about fielding SS troops. Realistically though, you can't really pretend they didn't exist, as they were a major part of the Axis forces in Normandy, at Arnhem and in the Ardennes.

So late last year when Offensive Miniatures had their sale, I picked up enough of their figures to create a Late War SS platoon. I really like the Offensive Miniatures sculpts, they are on the small side, (think Perry rather than Warlord Games), and are well-proportioned. The best description I can give is that they are a little reminiscent of upscaled AB figures. Which in my view, is a compliment.

This year, I also joined the Analogue Hobbies Painting Challenge, and I thought these guys would make a good first entry. So after hunting down painting guides online, discarding all the ones that seemed better suited to a single 90mm figure, "... now add the second highlight to each dot". In the end, I am quite happy with how they turned out. Of course not accurate, but good enough to fool the eye.